Following the frenzy about their bathing habits (or lack thereof), Ashton Kutcher and Mila Kunis took their kids Wyatt and Dimitri for haircuts this long weekend.

A fresh chop for a new school year. Ashton Kutcher and Mila Kunis stepped out to take their children Wyatt, 6, and Dimitri, 4, for a haircut in Los Angeles over the long weekend. The family of four hit up children’s hair salon The Yellow Balloon in Studio City on Saturday, Sept. 5. Mila, 38, looked California casual in a cropped vintage t-shirt with jeans and sneakers, while her husband, 43, also opted for a tee and jeans with an unbuttoned flannel long sleeve. 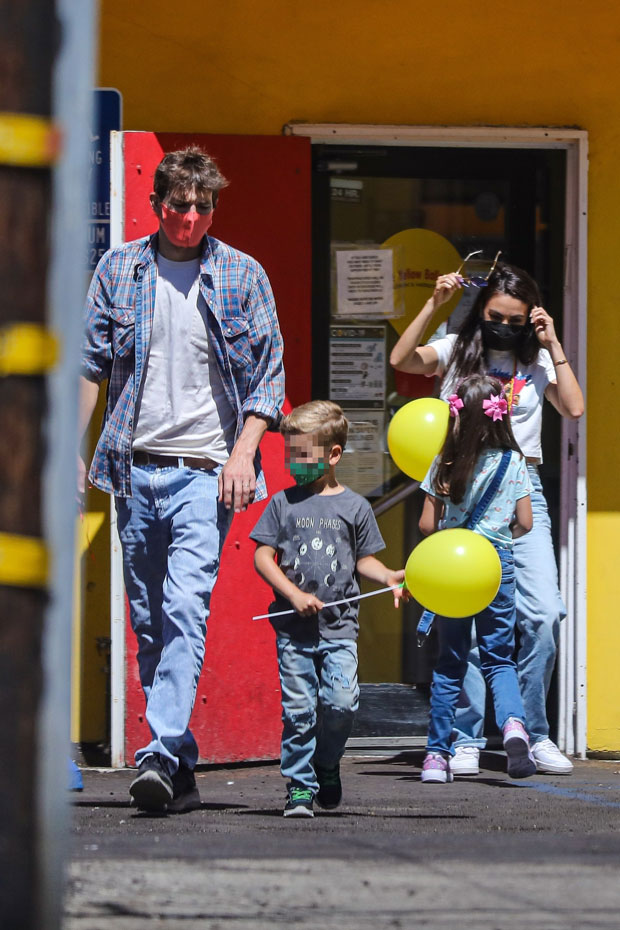 The kids could be seen stepping out of the salon with yellow balloons in tow. Wyatt opted for darling denim overalls while brother Dimitri wore a graphic t-shirt that showcased the different moon phases with some jeans. Wyatt also had some pink bows fashioned on her fresh cut, while her brother’s blonde locks were swept to the side. The family of four wore face masks amid the ongoing coronavirus pandemic.

The outing comes after the Hollywood couple sparked a frenzy on the internet after they admitted that they do not bathe their kids regularly. Mila and Ashton appeared on Dax Shepard and Monica Padman’s Armchair Expert podcast in July and said that there was “no point” in bathing the children everyday. “When I had children, I also didn’t wash them every day,” Mila said. “I wasn’t that parent that bathed my newborns ever.”

Ashton then chimed in and said, “Now, here’s the thing: If you can see the dirt on them, clean them. Otherwise, there’s no point.” The actor then divulged on his on hygiene habits. “I wash my armpits and my crotch daily, and nothing else ever,” Ashton continued. “I got a bar of Lever 2000 that delivers every time. Nothing else.”

The admission sparked a hygiene discourse within Hollywood soon after, with Kristen Bell and husband Dax defending the duo and later, Jake Gyllenhaal revealing that he finds “bathing to be less necessary.” Jason Momoa and Dwayne Johnson weighed in, too, and said they very much bathed regularly, with Dwayne even admitting that he bathed three times a day. In August, Ashton and Mila addressed the controversy once and for all with an Instagram video of the duo preparing to bathe their children.

“This bathing thing is out of hand,” Ashton captioned his video, in which he joked to his wife, “You’re putting water on the children? You trying to melt them?!”

LeBron James Gives A Powerful Speech During His ‘Graduate Together’ Special: ‘It’s Up To You Guys’

Who is Michelle Young from The Bachelor and how old is she?

Halima Aden hints at return to the fashion industry