Dancing On Ice Final: Winner Joe Swash pays tribute to late friend Caroline Flack with touching message during one of his last performances… weeks after her tragic death

Joe Swash discreetly paid tribute to his late friend Caroline Flack during his last performance on Dancing On Ice on Sunday, weeks after her tragic death.

The TV personality, who went on to be crowned the 2020 champ alongside his skating partner Alex Murphy, wowed judges with a Charlie Chaplin-inspired performance, which included a vintage poster emblazoned with the words ‘Be Kind’.

Following the Love Island presenter’s February 15 suicide, #BeKind trended across social media, in a nod to an Instagram post as she had shared at the end of last year. 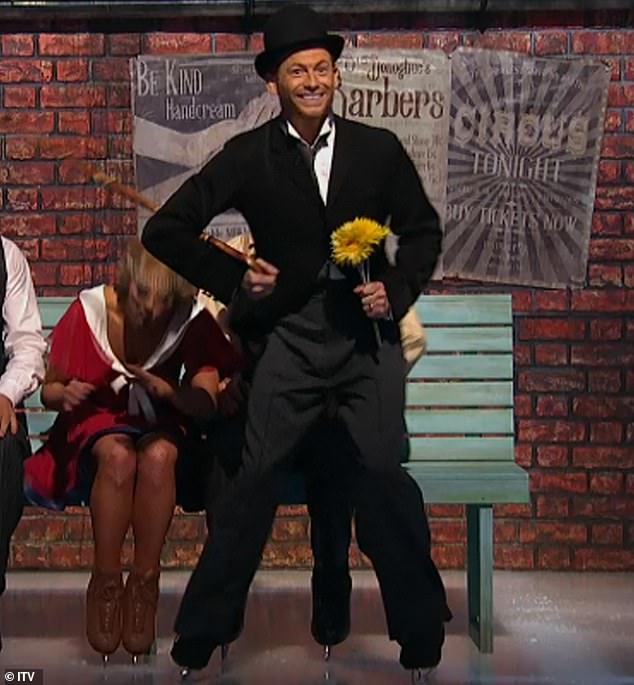 Tribute: Joe Swash paid tribute to his late pal Caroline Flack with a discreet ‘Be Kind’ message during one of his last performances on Dancing On Ice on Sunday evening

As 40-year-old Caroline faced the fallout from her looming assault trial, which saw her accused of physically attacking her boyfriend Lewis Burton, she shared a post which read: ‘In a world where you can be anything, be kind.’

Joe and Alex finished off their performances with the Boléro – the routine that won DOI head judges Jayne Torvill and Christopher Dean gold at the Sarajevo 1984 Winter Olympics, when they became the highest-scoring figure skaters of all time.

The routines saw Joe scoop the top spot ahead of runners-up Perri Kiely and Vanessa Bauer, and Paralympian Libby Clegg and Mark Hanretty, who placed third. 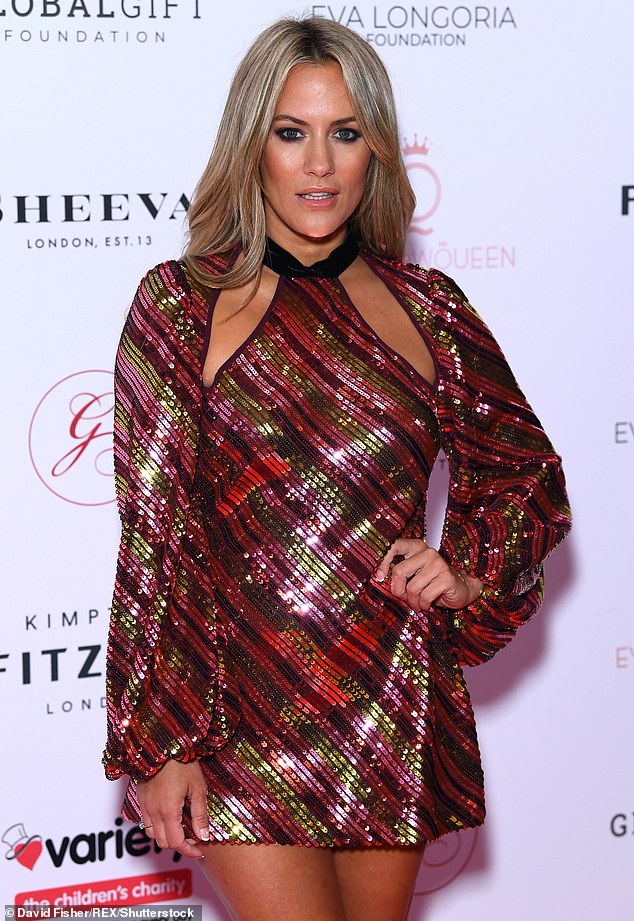 Pal: Caroline Flack took her own life on February 15. Part of the scenery on the rink was a vintage poster with the phrase ‘Be Kind’ on it – a nod to Caroline’s use of the #bekind hashtag 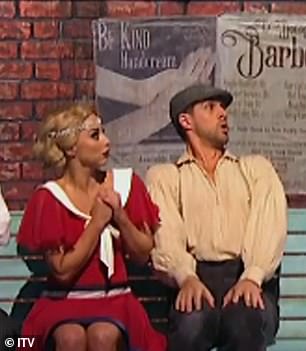 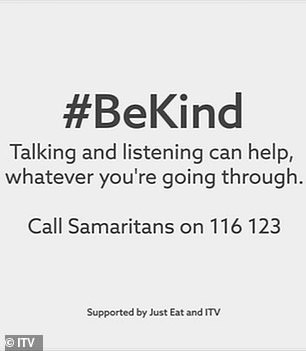 Friend: Joe and Alex performed a silent movie-inspired routine, and was sure to include his pal 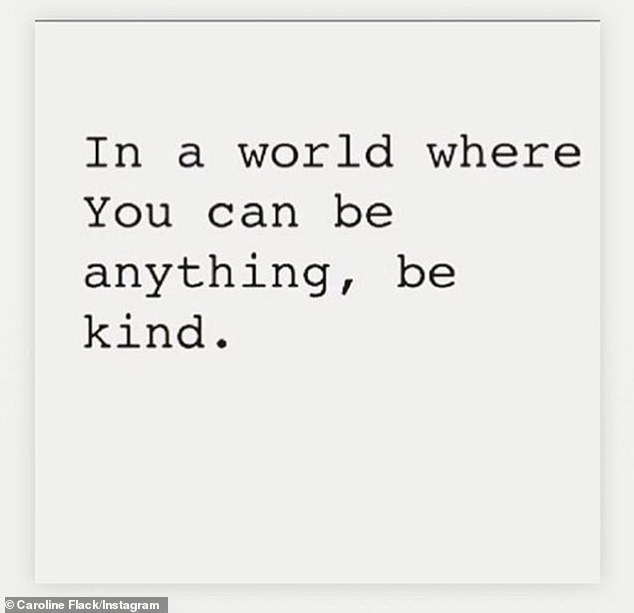 Be Kind: In December, Caroline took to Instagram to share a post which read, ‘In a world where you can be anything, be kind.’ She added, ‘Anything… we can literally choose to be anything….’

Joe’s victorious moment comes weeks after he was seen looking visibly distraught as he appeared on Dancing On Ice just a day after learning of Caroline’s death.

The star was visibly distraught as he addressed hosts Holly Willoughby and Phillip Schofield, admitting it had been a ‘tough day’.

Moments earlier the star had skated to Robbie Williams’ hit Candy, and professional skating partner Alex revealed their routine’s uplifting tone made Joe’s appearance on Sunday even more difficult as he struggled to process the news of Caroline’s death.

‘This was really hard to get through and do a happy number when he feels the way that he feels, so I’m so proud of him,’ she said.

Addressing Joe, Schofield added: ‘We’ve got to point out to everyone that you were very, very close to Caroline. It’s been an amazingly tough day and she’d be so proud of you.’ 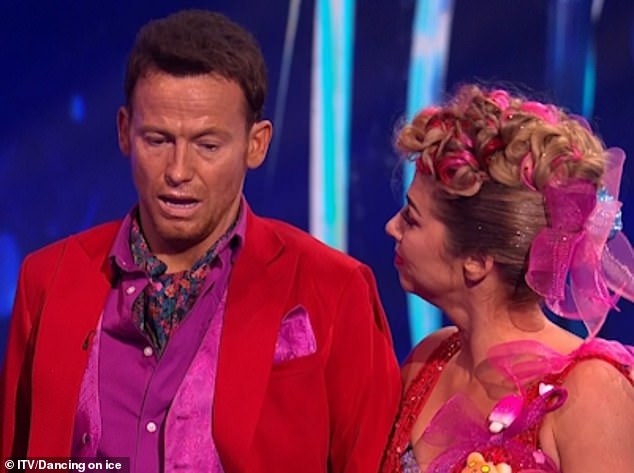 Devastated: A day after Caroline’s death, Joe offered condolences to the TV personality’s family following his performance on Dancing On Ice

‘I just want to send my love to her family and friends,’ Joe said as the studio audience broke into applause.

Taking to Instagram hours after news of her death broke, Joe fought back tears as he revealed his sadness that she didn’t reach out for help.

Speaking into the camera, a visibly devastated Joe said: ‘I want to send a message to everyone and let everyone know that Caroline Flack was the most amazing person you could ever come across.

‘She was funny, super talented, and she had the most infectious laugh.’ 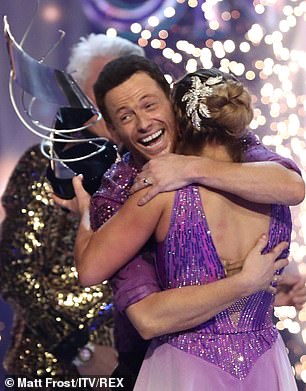 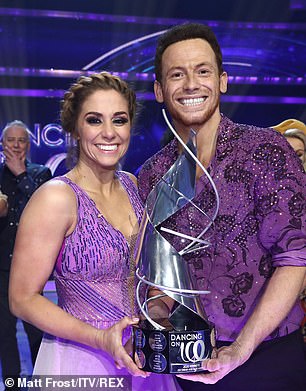 We are the champions:  Joe and Alex Murphy were named the winners of Dancing On Ice 2020

It was revealed that paramedics visited Flack’s north-east London home the day before her suicide – but didn’t take her to hospital after a clinical assessment.

Sources told MailOnline that ambulance crews were sent to the former Love Island presenter’s Stoke Newington flat over ‘concerns for her welfare’, but decided against taking her to hospital after checking her over.

Caroline took her own life after a worried friend who was staying with her went to the shops, leaving her alone at her London flat.

The producer friend couldn’t get back into the flat when she returned. She called Flack’s father Ian who gained entry to the flat where he found the star’s body.

If you have been affected by this story, you can call the Samaritans on 116 123 or visit www.samaritans.org. 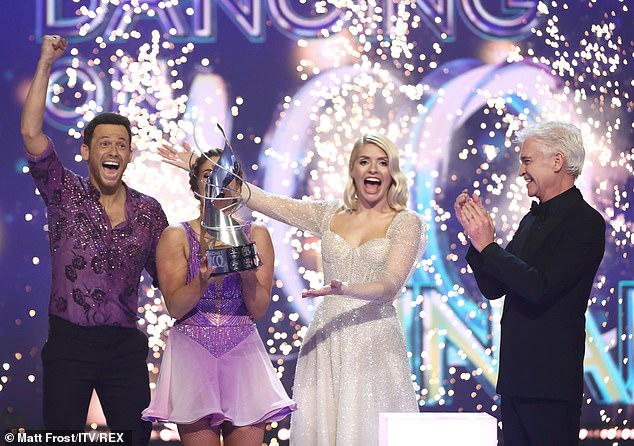 Winning: Joe and Alex were overjoyed to take home the crown on Sunday. Pictured with presenters Holly Willoughby and Phillip Schofield 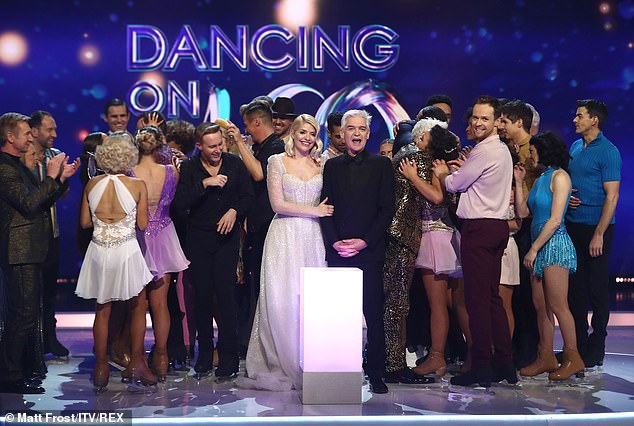 Congrats: All the celebrity competitors congregated on set to congratulate the winning duo

Who Is Hosting the Oscars 2021? Here's What We Know