‘As you can see, I’m still standing!’: Elton John, 73, and Michael Caine, 87, join forces to encourage Britain to get the Covid vaccine in new NHS advert

Sir Elton John and Sir Michael Caine have appeared in an NHS advert urging the public to get vaccinated against coronavirus.

The video, shot at London’s Chelsea and Westminster Hospital, aims to ‘show others that getting the life-saving jab is easy and safe’, according to a statement.

The clip shows the famous pair appearing to audition for a part in an advert promoting the jab. 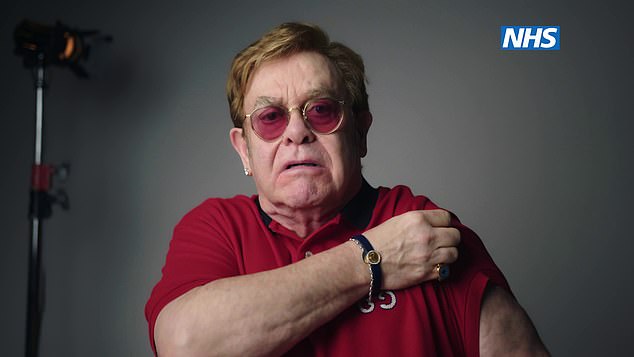 Important: Sir Elton John and Sir Michael Caine have appeared in an NHS advert urging the public to get vaccinated against coronavirus

In the video, Sir Elton, 73, said: ‘The more people in society that get vaccinated, the more chance there is of eradicating the national Covid pandemic.

‘It is really important to know that the vaccines have all been through and met the necessary safety and quality standards.’

After apparently being given the injection, Sir Elton then references his 1983 hit I’m Still Standing by saying: ‘As you can see, I’m still standing, yeah, yeah, yeah.’

The director then responded by saying: ‘Thanks Elton, we will let you know.’ Sir Elton replied: ‘Well at this short notice you won’t find anyone bigger.’ 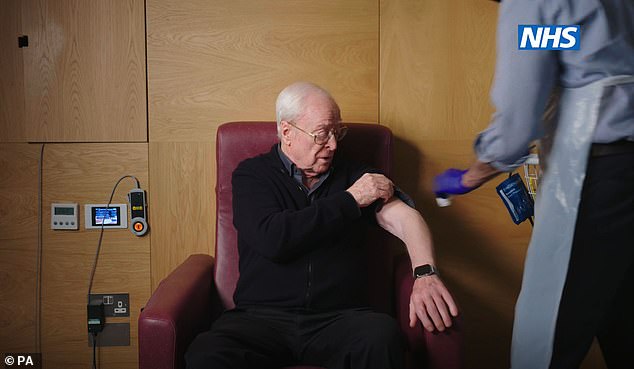 Campaign: The video, shot at London’s Chelsea and Westminster Hospital, aims to ‘show others that getting the life-saving jab is easy and safe’, according to a statement

The video then cuts to Sir Michael, 87, as he appears to be given the vaccine.

The actor said it ‘didn’t hurt’ before saying: ‘Not many people know that.’

Afterwards, the director can be heard telling someone to ‘let the little fella know he didn’t get the job’.

The video has been released after the NHS asked anyone aged 70 and above who has not yet been vaccinated to come forward to receive one. 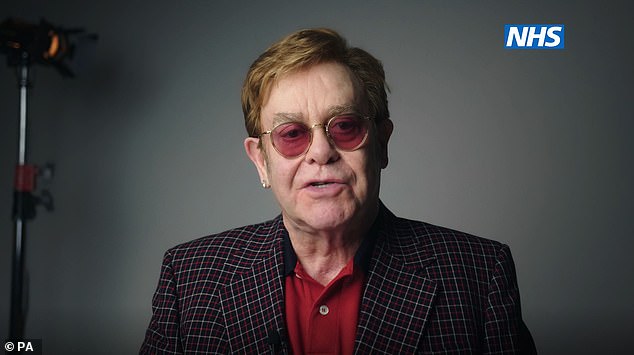 Vaccine: The clip shows the famous pair appearing to audition for a part in an advert promoting the jab

The campaign’s co-ordinator Professor Lord Ara Darzi, who is co-director of the Institute of Global Health Innovation at Imperial College London, said Sir Elton and Sir Michael are ‘trusted faces’ who are ‘loved’ by the public.

‘I asked them [to take part] and they were extremely generous in giving us the time to do this, which I was very grateful for, and I hope it does the job in convincing the population that vaccines for Covid is the best way out of this pandemic,’ he told the PA news agency.

‘They were extremely keen to help in any way possible.’ Lord Darzi added he wanted the video to be ‘humorous and engaging’ and he hopes people who are sceptical about the vaccine will change their minds.

‘I think many people who have had two thoughts about this will think again,’ he said. 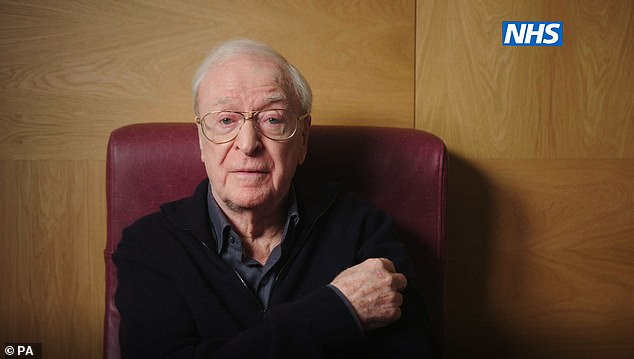 Jab: After getting the vaccine, Michael said it ‘didn’t hurt’ before saying: ‘Not many people know that’

NHS chief executive Sir Simon Stevens said: ‘Well over nine out of 10 people aged 75 and over have already taken up the offer of their NHS Covid vaccination, and now we want to encourage everyone in the high priority groups to do so.

‘That’s why we’re grateful to Sir Elton and Sir Michael for helping the NHS promote vaccine uptake, building on the fast and efficient programme to date, which has seen the NHS already vaccinate one in four adults across England.’

On Monday, the Health Secretary trumpeted the success of the roll-out so far, confirming the NHS is on track to hit its target of immunising the 15million most vulnerable Brits by next Monday.

Almost 12.5million people have already received their first dose of vaccine and the health service is administering 450,000 every day, on average, putting the country well on track to hit the milestone next Monday.

Previously, over-70s were told to wait until they were contacted — through a letter, email, text or phone call — to ensure all over-80s, care home residents and patients with serious underlying health conditions had first access.

People in that age group can now schedule an appointment using the NHS booking service or those unable to get online can phone 119. 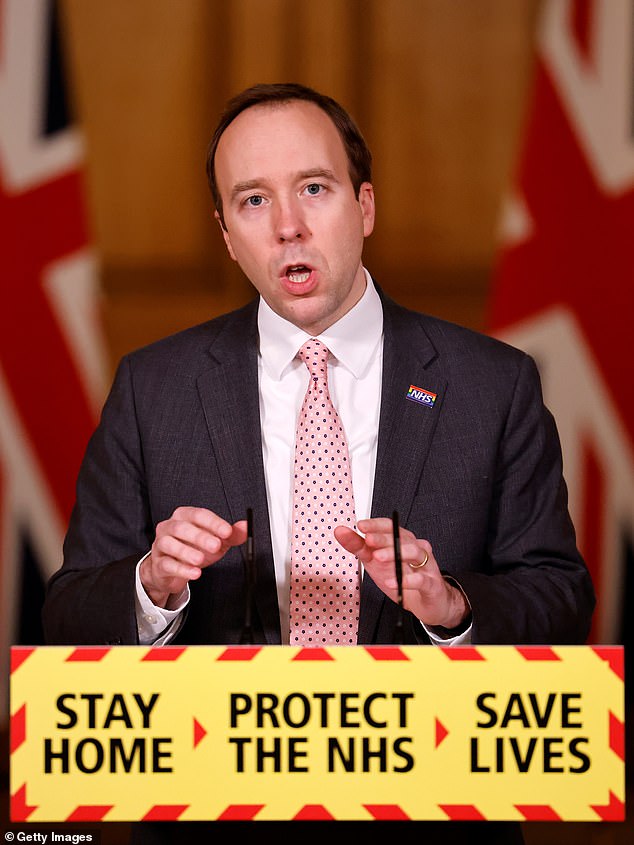 On track: On Monday, the Health Secretary trumpeted the success of the roll-out so far, confirming the NHS is on track to hit its target of immunising the 15million most vulnerable Brits by next Monday

Matt Hancock said take-up of the vaccines has so far been ‘significantly better than we hoped for’, claiming it has hit a staggering 95 per cent in people in their late 70s, 91 per cent of over-80s and almost three quarters of people in their early 70s. He said the Government had been expecting approximately 75 per cent.

Frontline health and social care workers, who are also at the top of the priority list, are also being urged to come forward and arrange an appointment if they’ve not had a dose. And GP practices have been told to contact any extremely vulnerable patients who have still yet to receive their first injection.

Meanwhile, Downing Street said today it expects to have vaccinated all over-50s by the end of April, raising hopes that Britain could drop the vast majority of curbs in May. Boris Johnson is under pressure to step up the reopening of the country as soon as the top nine groups – around 32million people – are covered.

Britain is jabbing at record pace, dishing out more vaccines per person than any country in the world other than Israel.

WHICH COVID VACCINES WILL BRITAIN GET ITS HANDS ON?

The breakthrough jab was the first in the world to be proven to successfully block severe Covid-19 last year and it gained approval in the UK on December 2.

Type: It uses brand-new technology and is known as a messenger RNA (mRNA) vaccine. Conventional vaccines are produced using weakened forms of the virus, but mRNAs use only the virus’s genetic code to enters cells and tells them to create antigens, which make them look like the coronavirus.

Efficacy: Studies showed the two-dose vaccine could prevent severe illness in 95 per cent of people who were injected with it.

How many? The Government has ordered 40million doses, enough to vaccinate 20million Brits, but only a handful of million Brits have received the jab so far.

Type: Oxford’s vaccine is made from a weakened version of a common cold virus known as adenovirus which is genetically engineered to carry the genetics needed to create ‘spike’ proteins that make cells look like the coronavirus.

How many? The UK has ordered 100million doses.

Type: Moderna’s jab also uses mRNA technology and works in a similar way to the Pfizer one already being offered on the NHS.

Efficacy: It was found to have 95 per cent efficacy in clinical trials.

How many? Britain has ordered 17million doses but was late to the party because it didn’t want to bet on this as well as the Pfizer jab, because both are based on the same technology. The first doses are expected to arrive in March.

Type: The Novavax vaccine works like other vaccines by teaching the immune system to make antibodies to the coronavirus spike protein. Researchers inserted a modified gene into a virus, called a baculovirus, and allowed it to infect insect cells. Spike proteins from these cells were then assembled into nanoparticles which, while they look like coronavirus, cannot replicate or cause Covid-19.

Efficacy: Novavax said the trials had shown its vaccine was 89.3 per cent effective at preventing Covid-19.

How many? Under a deal with the Government, 60million doses of the vaccine will be produced on Teesside for use in this country.

Type: The jab uses the same adenovirus technology as the Oxford University vaccine, making it just as easy to transport and store, but requires just a single injection to protect against Covid.

Efficacy: Johnson and Johnson said it prevents, on average, 66 per cent of all coronavirus cases among people who get the jab.

The company also found it prevented severe symptoms in 85 per cent of people and no-one who got the jab died or needed hospital treatment from 28 days after being inoculated.

The 66 per cent efficacy was a global average, with the jab preventing 72 per cent of cases in the US but only 57 per cent in South Africa, which is being devastated by a mutated variant that appears to be less susceptible to vaccines and immunity from older versions of the virus. It is promising, however, that the jab still worked in South Africa and still prevented hospitalisation.

How many? The UK has already struck a deal for 30million doses, with the option of ordering 22million more.

Type: This jab is an ‘inactivated whole virus vaccine’ which uses a damaged version of the real coronavirus to stimulate the immune system.

How many? Britain has already ordered 100million doses and the first batches could be delivered by the end of 2021.

Type: GSK’s vaccine is based on the existing technology used to produce Sanofi’s seasonal flu vaccine. Genetic material from the surface protein of the Covid virus is inserted into insect cells – the basis of Sanofi’s influenza product – and then injected to provoke an immune response in a human patient.

How many?  The UK in July secured 60million doses of the prospective treatment, but the companies say they will likely not be ready before the end of 2021.

The Best Romance Novels If You Loved Bridgerton

Solos episode 1 ending explained: What happened to Leah in episode 1 of Solos?

NFL's Thomas Davis Sr. Claims 'Idiots' Stole & Wrecked His McLaren, 'We Know Who Did It'