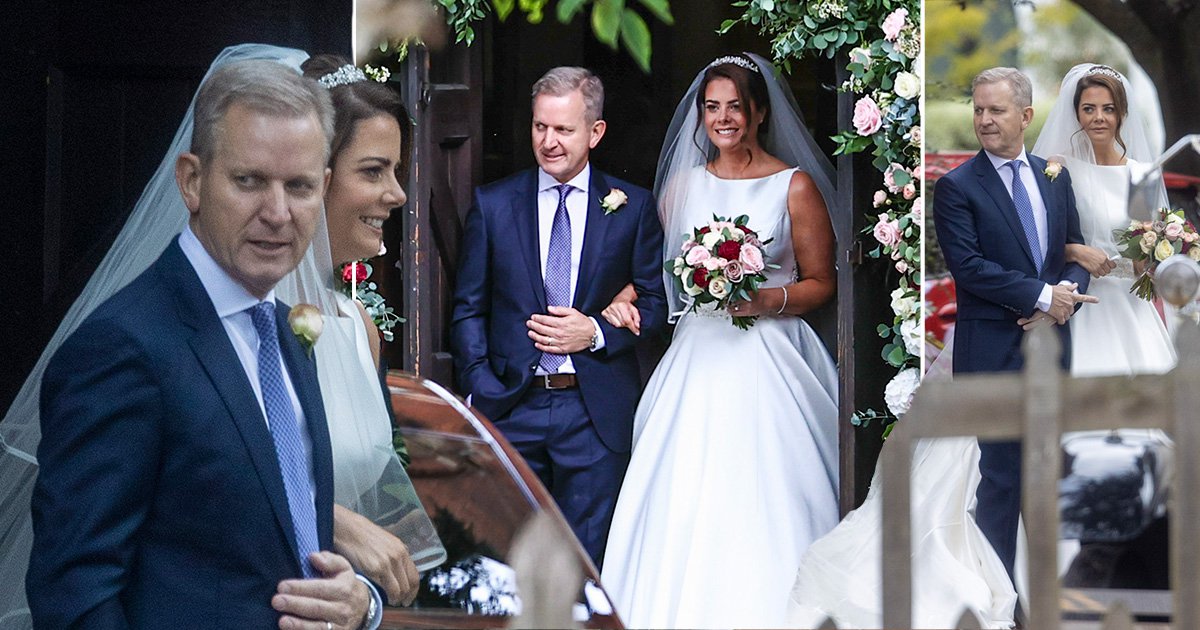 Jeremy Kyle was finally able to tie the knot with fiancée Vicky Burton, and the first pictures show the couple looking completely smitten.

The TV presenter, 56, married his children’s former nanny Vicky, 38, in a low-key church ceremony at All Saints Church in Windsor, Berkshire.

The couple was forced to reschedule their big day six times due to coronavirus restrictions.

However, that only seemed to make their big day even more special, and they were seen leaving the church linking arms before being showered in confetti by loved ones.

She accessorised with a sparkling tiara and veil and carried a bouquet of pink and red flowers.

The new husband and wife shared a moment together outside the church before joining friends and family for celebratory hugs and kisses.

A London double-decker bus sat outside, adding a touch of quirkiness to the otherwise traditional ceremony.

The bus ferried guests between the church and reception, with ‘Best wishes! J & V… at last!’ written on the front.

The daytime TV veteran described his third wife as his ‘rock,’ praising her for supporting him through his anxiety battle following his show’s cancellation.

The Jeremy Kyle Show was taken off air after a participant died by suicide following an appearance on the programme.

Speaking to The Sun after marrying Vicky, Jeremy said: ‘Thankfully, at what is our sixth attempt after all the Covid cancellations and postponements, we got to enjoy the big day we’d both longed for.’

He added lovingly: ‘Vick’s been my rock in my darkest times, so to see her today, having such fun enjoying the wedding of her dreams, was perfect.’

Jeremy, who returned to work earlier this year hosting the drive-time slot on TalkRadio, said he is a ‘very lucky man.’

‘She’s seen me at my best, and at my lowest ever ebb, and still wants to marry me. She is the love of my life.’

Jeremy started dating Vicky in 2017 and popped the question the following year.

They met when Vicky worked as a nanny with Jeremy’s five children, reconnecting years later when he split from second wife, Carla Germaine.

The presenter has four children from two previous marriages and a son with Vicky.

During the launch of his new radio show, Jeremy said he is ‘very proud of’ the show he fronted for 14 years and, while he’s legally unable to comment on the ‘tragic situation’ that occurred, he will do so on-air when it’s possible.

‘But for now that is a closed chapter, what is important is this radio station,’ he said.

'Right Before I Hung Myself': Prisoners Share Tales of Solitary Confinement in Michigan

Inside Kate and William’s family life during lockdown, where Louis hangs up calls and the kids are obsessed with tents