Reacting to an internet critic who says that her mic is ‘very much off’ during her live performance at Don Julio Tequila’s Casa Primavera launch event, the member of Fifth Harmony writes, ‘babbbby my mic was hot.’

AceShowbiz –Normani Kordei has responded to an internet critic who disrespected her live vocals. After being accused of lip-syncing during her latest performance, the member of Fifth Harmony took to her Twitter account to shut down the allegation.

“Babbbby my mic was hot,” the 25-year-old musician wrote on Sunday, July 25 while replying to a tweet that claimed her mic was “very much off” and featured a TikTok video from her performance at Don Julio Tequila’s Casa Primavera launch event in Malibu, California. She went on to clap back, “Thank you tho pooh. this just what hard work sound like.” 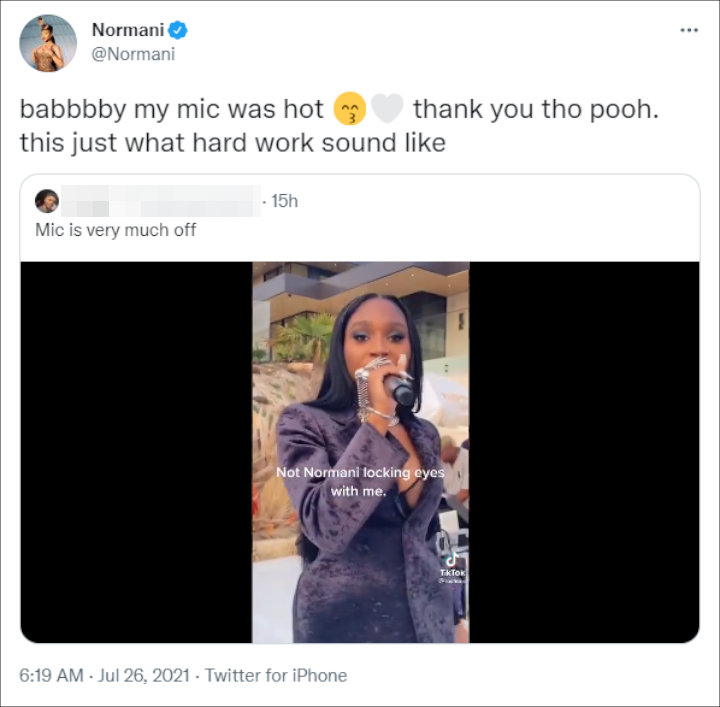 Normani clapped back at an online critic who accused her of lip-syncing during her live performance.

In the clip, Normani sang her sultry Cardi B collaboration “Wild Side” for the very first time. During her live show, “The X-Factor” alum could be seen wearing a sleek velvet suit dress and garter tights. She also revealed to the audience that the performance was her first in two years due to the pandemic.

Of Normani’s new single, Cardi explained, “I did a verse and Normani team said they wanted nastier sooo I was like alright … your wish is my command.” Explaining how her collaboration with the “Bodak Yellow” hitmaker came about, the “Love Lies” songstress said that the 28-year-old rapper added her verses at the last minute.

Normani, who originally recorded “Wild Side” as a solo single, happily welcomed Cardi when the latter expressed her desire to be on the track after listening to a snippet of it. “She delivered while we were in rehearsal. So while we were rehearsing, we actually didn’t have the verse yet and then we got the verse and the s**t just happened,” she exclaimed.

“Wild Side” marked her first radio single since her debut solo track “Motivation”, which reached Top 40 around the world after it was released in 2019. “I feel like this is Normani’s big comeback and I want you guys to treat it like it’s her birthday,” Cardi gushed about the song earlier this month. “I am just so proud of her. I’m just the support team. … I’m just here like, ‘Yay.’ But I’m so excited.”