So, apparently Prince William (who straight up “refuses” to watch Meghan Markle and Prince Harry’s Netflix docuseries), has told his friends not to say anything against the royal couple. According to The Sunday Times, William has “instructed friends not to retaliate,” and a source who appears to be one of his buddies confirmed that Wills “does not want us fueling the conflict” and has “been very clear on that.” They also noted that “he’s keen to have as much of a normal week as possible.”

Meanwhile, another friend told the paper about the advice they gave William, saying “I reminded him to keep his rifle pointed at the target and not to be distracted, even though it’s all fucking tedious in every sense of the word.” Er…okay! 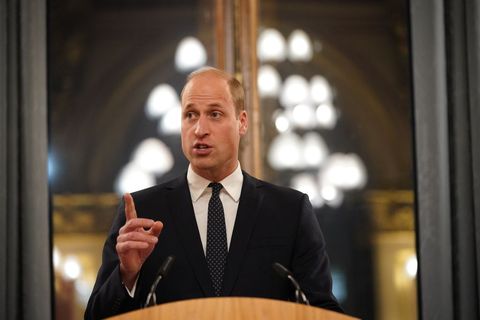 William’s strategy is seemingly to stick his head in the sand and keep it there, because one friend tells the Sunday Times that he “will never watch” Harry and Meghan’s docuseries—a claim that was backed up by another source who simply said “correct.”

Meanwhile, sources tell The Mirror that Harry is “delighted” with Volume I of Harry & Meghan and that he has “absolutely no regrets” about doing the series. In fact, he hopes his family will watch it.

“Harry and Meghan hope family members and courtiers will watch or, more importantly, listen to their comments. But they know nothing they speak about will be addressed in public,” a source explained. “They hope it may prompt a greater understanding from the King and the Cambridges of how Harry and Meghan feel about their experiences in England.”

Ricky Gervais on What Annoys Him About Celebrities in Quarantine

John Waters Is the New Face of Saint Laurent