Royal family experts say Queen Elizabeth II had a close relationship with grandson Prince Harry. After Harry and Meghan Markle stepped back from the monarchy and spilled the family tea to Oprah, some wonder if Harry and the queen still enjoy their special relationship. Now, news from London suggests Harry and Meghan still matter to the queen. But before getting to that, let’s take a closer look at their bond.

In a 2019 documentary for U.K. network Quest Red (via E! News), Harrold, Prince Charles’ former butler, talked about Harry’s relationship with his grandmother, saying, “I think in public we can see that the queen does let her guard down a bit with Prince Harry. There’s a very special relationship.” The former butler added, “Sometimes, I wonder if maybe he reminds the queen a little bit of Prince Philip. You know, with that wonderful, let’s say, the kind of glint in his eye.”

Royal correspondent Katie Nicholl wrote a book about Prince William and Prince Harry in 2010, “William and Harry: Behind the Palace Walls.” Nicholl told Us Weekly that Harry once changed his grandmother’s voicemail message to the following, “Hey, wassup? This is Liz! Sorry, I’m away from the throne. For a hotline to Philip, press one, for Charles press two, for the corgis, press three.”

According to E! News, Queen Elizabeth “has a soft spot for Harry, who was only 12 when Diana died.” Keep reading to find out the proof that Harry and Meghan still matter to the queen. 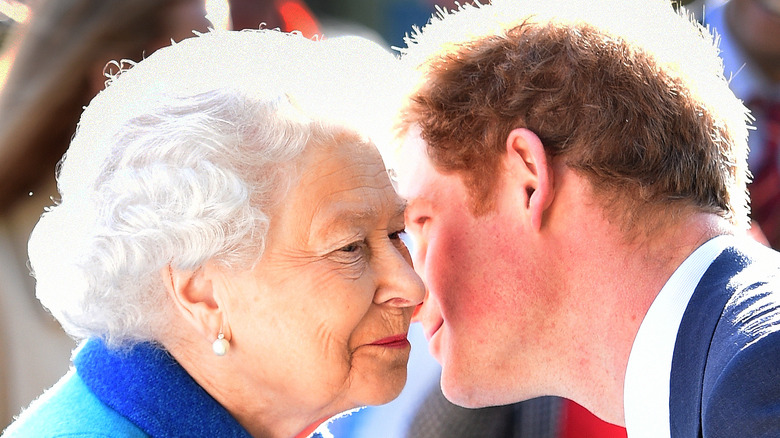 Queen Elizabeth II still loves Prince Harry and his wife Meghan Markle, and she sent a message that she considers them part of the family. The queen made a point of including Harry and Meghan in a new London exhibition about the royal family, according to The Daily Mail.

The new exhibit, “The Tudors To Windsors: British Royal Portraits” at the Royal Museums Greenwich in London, is about the royal family’s history. The Daily Mail reported that the exhibit shows details about the abdication of the queen’s uncle Edward VIII; there is no mention of Harry and Meghan leaving the monarchy. The London exhibit is significant because it was done in partnership with the National Portrait Gallery of which Kate Middleton, Duchess of Cambridge, is the patron.

According to the British outlet, senior curator Charlotte Bolland said, “The focus is on the Royal Family today, and the Duke and Duchess of Sussex are very much part of that. It’s important to frame them as being very much part of the family, as the Queen has stressed.” Bolland continued, “You can see throughout the exhibition that both the monarch and their family are a key element of the structure of the monarchy in this country and [this] is reflected in the portraiture.”

It appears Queen Elizabeth still has a soft spot for her cheeky grandson Harry.

Kim Kardashian slammed for ‘cultural appropriation’ over her new hairstyle

‘Love Lies’ cowriter Tayla Parx reveals she’s been working on Normani’s debut solo album for years: ‘She’s been trying to get it right’

Does BTS Have Their Own McDonald's Burger?