Earlier this year, Prince Harry and Meghan Markle visited the UK for the first time as a family of four, and it seems the trip must have gone down a treat with the Royal Family, as the Queen has reportedly invited them to stay with her at Balmoral over the summer.

As we all know, every year Her Majesty spends the summer at her Scottish residence, and according to a source who apparently works for the royal, she is expecting the Sussex family to spend some time with her there over the coming months.

“Staff have been told to expect the full list of royals including Harry, Meghan and their children Archie and Lilibet,” the insider told The Sun. “They are preparing for the Sussexes.”

It comes after the pair reportedly spent less time than expected with the Monarch during their Jubilee visit, given the Queen’s busy schedule over the four day bank holiday weekend. “They barely had 15 minutes with her at the jubilee,” a second source told the newspaper. “Balmoral is the perfect place for them to spend a little bit of quality time with the Queen.” 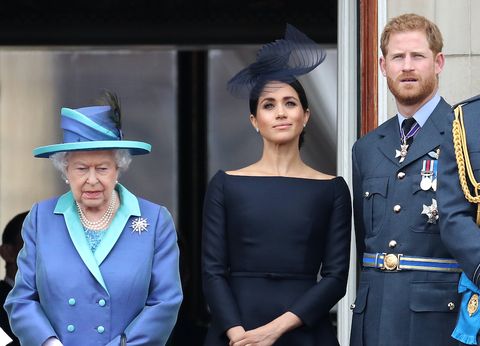 During the Sussexes’ visit, Lilibet Diana – who is named after her great-grandmother, the Queen – turned one-year-old. To celebrate the occasion, the Duke and Duchess of Sussex hosted an informal garden party at Frogmore Cottage, with picnic-style snacks, a birthday cake, balloons and party games.

Their trip also marked the first time that Lilibet and her namesake met – although their meeting was brief, lasting less than an hour. “She was working very hard to maintain her strength,” royal expert Jonathan Sacerdoti said to US Weekly of Her Majesty. “I think it’s totally understandable that she was saving her energy as best she could for all the events that she wanted to be at if she possibly could.”

Sacerdoti continued: “We’re talking about someone in their nineties and a baby.”

Since stepping down as senior working royals in 2020, Harry and Meghan’s relationship with the Royal Family has been somewhat strained, with an insider previously saying that the Duke was “heartbroken by the situation with his family”.

The source added: “The situation with the family clearly isn’t ideal.”

But, following on from the Platinum Jubilee and the Queen’s summer invite, those family relationships could very well be on the mend! We’ve got our fingers firmly crossed…

Woman, 35, who had baby with stepson, 21, after romping behind husband’s back shows off their new child for first time

Tennessee boy, 10, dies after trying to save sister from frozen pond, reports say

Ne-Yo Expecting Baby No. 5 After Reconciliation With Wife