Nothing says you've arrived at Disney World quite like seeing Cinderella Castle in Magic Kingdom.

Since the theme park first opened in 1971, the iconic landmark has welcomed both longtime parkgoers and first-time guests. However, it hasn't always looked exactly the way it does in pictures.

From a pink birthday overlay to new lighting features, here's how Cinderella Castle has changed over the years.

Cinderella Castle was constructed over the course of 18 months in 1970. 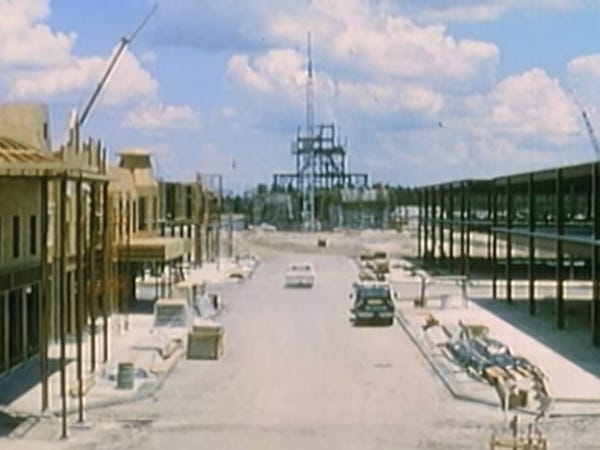 As seen in vintage video footage posted by Disney on YouTube, Cinderella Castle — as well as the rest of Magic Kingdom — was built across barren land.

According to Disney World, materials like concrete, steel, plaster, cement, and fiberglass were used during construction of the castle, but bricks surprisingly played no part, despite the castle's outward appearance.

By opening day, Disney imagineers had created a building actually worthy of a princess. 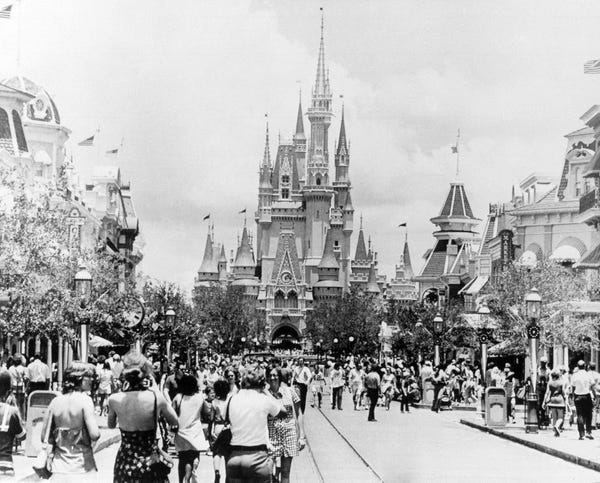 Disney World opened for business on October 1, 1971. At the time, lush greenery surrounded the front of Cinderella Castle, which was painted with light blues, grays, and golds.

Each spire was also topped with a small flag. To this day, the castle still stands as the tallest structure in Magic Kingdom, reaching 189 feet.

The castle maintained its iconic appearance in 1995, more than two decades after the park first opened. 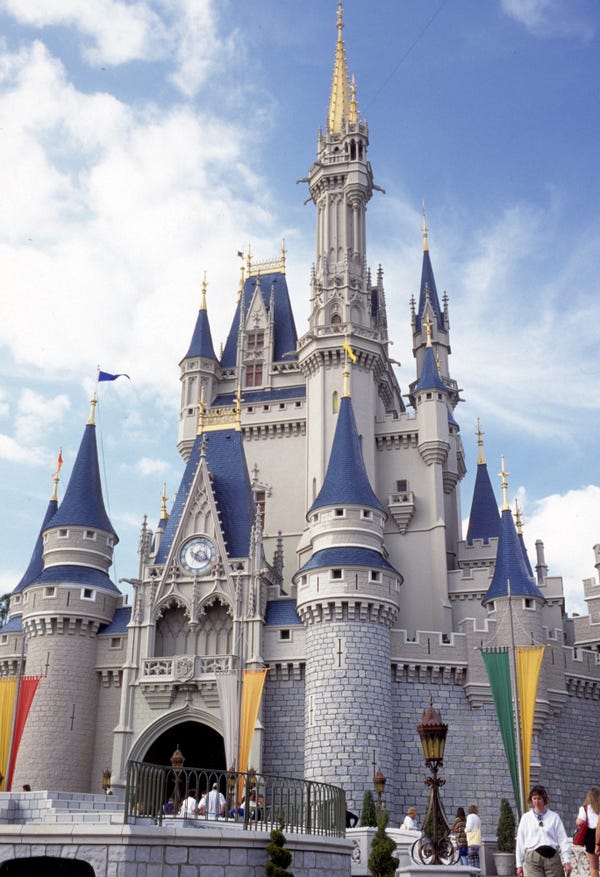 In photographs from that year, the castle looked mostly the same as it had on opening day. However, its spires were seemingly painted a darker shade of blue than they were originally, and colorful flags were placed in front of the castle entrance.

In 1996, however, Disney covered the landmark with a pink birthday-cake overlay to celebrate the park's 25th anniversary. 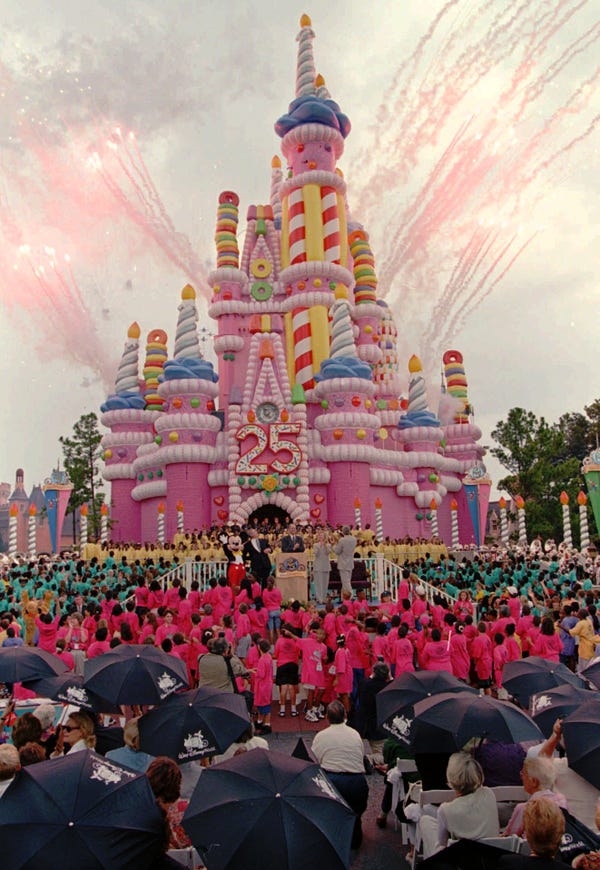 The castle was transformed on October 1, 1996, according to the Disney Everyday blog. It was covered in pink paint that looked like icing, candy-cane spires, and 26 decorative birthday candles. The overlay remained in place until January 31, 1998.

While some people loved the transformation, others weren't as impressed. After all, people travel from across the world to have their photo taken in front of Cinderella's home — not a larger-than-life cake.

The castle was decorated again in 2005 as part of a worldwide Disney celebration. 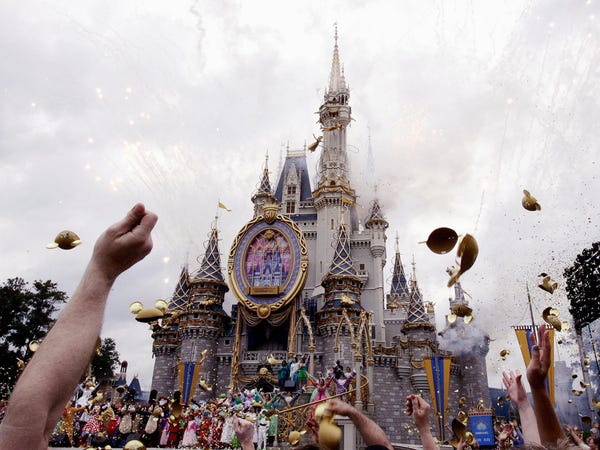 Disneyland turned 50 in 2005, and the anniversary was celebrated by every Disney theme park around the world. At Disney World specifically, each tower on Cinderella Castle was covered with gold spirals and character statues. Peter Pan and Wendy, for example, could be seen "flying" around the tallest spire.

A "magic mirror" was also attached to the front of the castle, displaying images of other Disney castles located around the world.

One of the most surprising castle changes happened in 2005, when Disney World introduced Stitch's Great Escape. 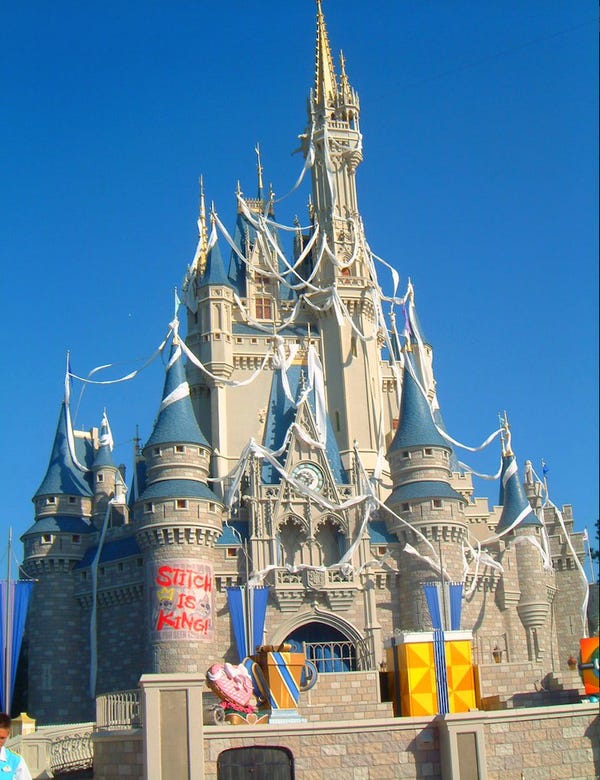 When the alien-themed attraction opened in Magic Kingdom on November 16, 2004, parkgoers were surprised to find a giant Stitch inflatable sitting inside the park, according to WDW Info.

Even further inside, they encountered Cinderella Castle covered in toilet paper and a sign that read "Stitch is King!"

For the first time in 2007, Disney draped twinkling lights over Cinderella Castle. 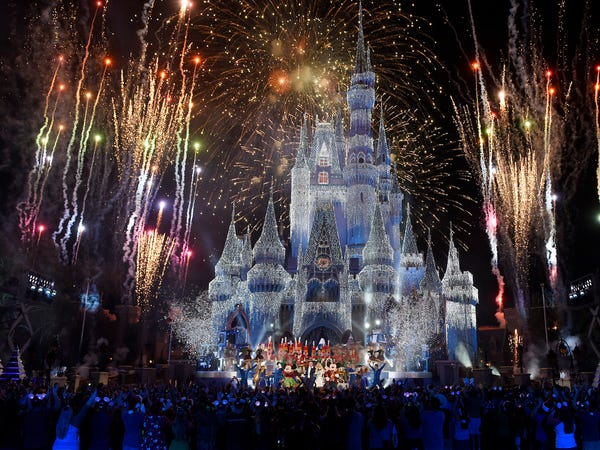 Though nightly shows have changed since 2007, Disney World still incorporates the stunning lights into its yearly celebrations. In 2019, for example, the castle was lit each night between November and December as part of "A Frozen Holiday Wish." 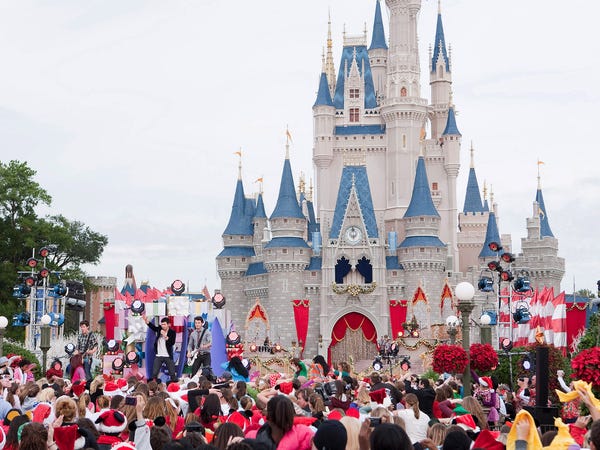 As seen in photos from the 2009 event, Disney World used red curtains, garland, wreaths, and ornaments to bring holiday spirit to the Magic-Kingdom landmark.

Similar decorations are still used throughout the park today — and they're all purchased by a single Disney cast member, according to "One Day at Disney," a book that documents the wide variety of roles held by Disney employees. 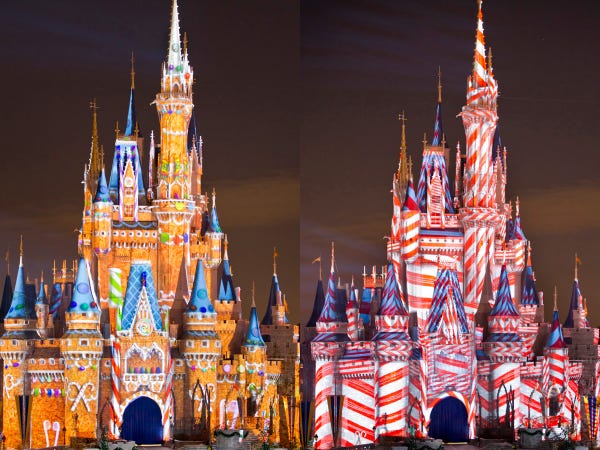 The light show ran between 2011 and 2012, and was named "The Magic, The Memories, and You!" According to Touring Plans, special effects were used to display various images across the castle, including portraits of real parkgoers and scenes from Disney movies.

Between the months of November and December, Disney put a holiday twist on the show, covering Cinderella Castle in images of candy canes and gingerbread.

Today, Cinderella Castle looks a lot like it did when Magic Kingdom opened in 1971. 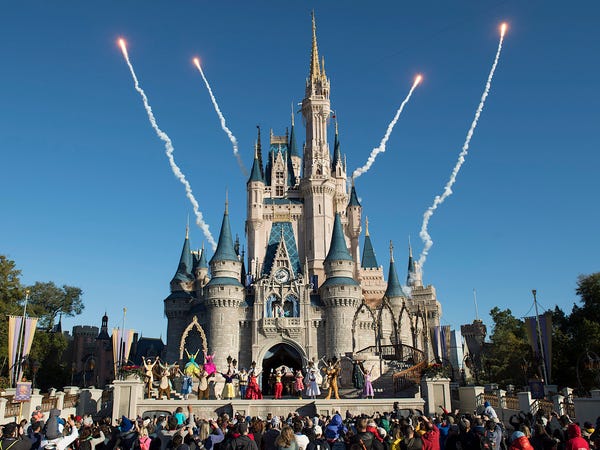 Of course, the building has been spruced up over the years — for example, criss-cross patterns have been painted across some of the castle's exterior. Still, it maintains its blue-and-gray colors, pointed spires, and gold accents.

By the end of 2020, however, Cinderella Castle will likely look very different. 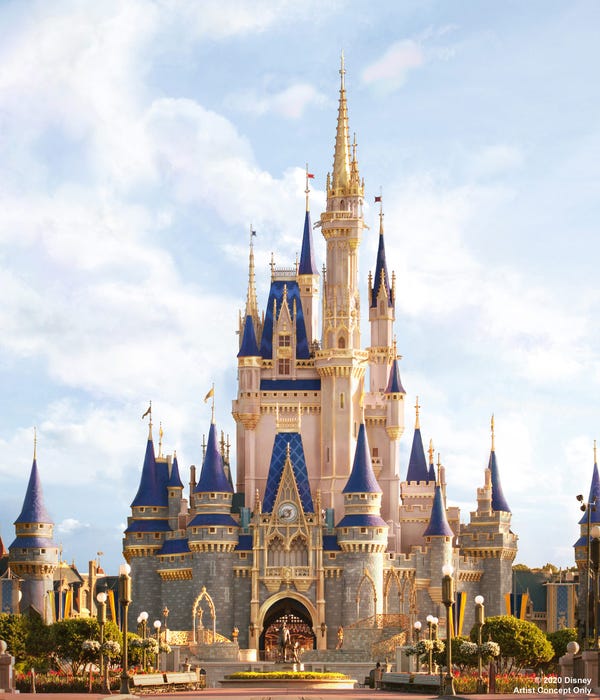 In February, Jason Kirk, the vice president of Magic Kingdom, announced in a Disney Parks Blog post that the iconic structure will be getting a makeover in honor of the 70th anniversary of "Cinderella."

No specific changes have yet been revealed, but a mock-up image seems to show that the castle will be painted pink. It's unclear when parkgoers will be able to see the new and improved castle, but renovations will begin in "the coming weeks" and continue throughout the summer, Kirk said.

With “Create The Club” Initiative, Social Club Seltzer Calls on Creatives To Help Build its Brand

Spoilers: Natasha causes Simon's death by going to the police in Corrie?

Revealed: 850 retail jobs have been lost each working day in 2021