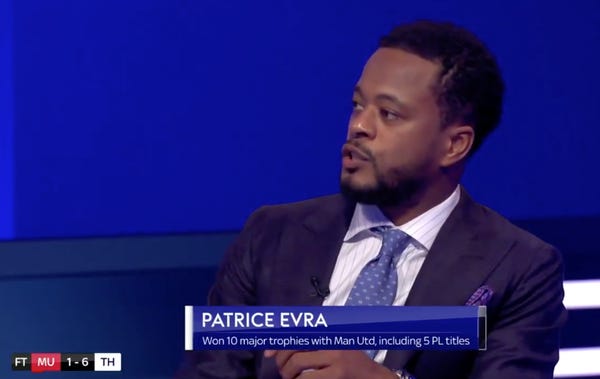 Ex-Manchester United defender Patrice Evra was so angry at his former side's 6-1 defeat to Tottenham Hotspur on Sunday he threatened to quit his punditry job live on television.

Evra, who played 379 times for United between 2006 and 2014, was working for Sky Sports as he watched Ole Gunnar Solskjaer's side suffer a club record equaling defeat at the hands of Spurs.

After, not only did the Frenchman offer to resign from Sky, he also said he would "slap" the United players if he was the manager.

"Alexis Sanchez made a comment. He said when he signed for United at his first training session he asked his agent to end up his contract," Evra said.

"That's what I'm going to ask to Sky. I really would like to end my contract with Sky.

"Because it's my second game, I'm a positive person and I never want to talk about United because when you tell the truth it can hurt and I'm passionate and I love my club. I know you have to have some filter when you talk on TV, but it's a shambles.

"I feel now what all the United fans [feel]. That's why I'd prefer to comment different games than the United games if I keep working for Sky."

Evra added:"It is a shambles. What is going on with my club? I am really, really angry. I don't promote violence, but many people need a good slap right now.

"That's what I would do right now if I'm working for the club. I know you laugh, but I really don't wanna laugh right now. I'm really, really angry."

United started the game against Tottenham on the front foot, going 1-0 up inside just two minutes courtesy of a Bruno Fernandes penalty.

However, two pieces of calamitous defending quickly gifted goals to Tanguy Ndombele and Son Heung-Min, before Anthony Martial was sent off in the 28th minute for lashing out at Erik Lamela.

Goals from Son and Harry Kane then made it 4-1 before half time, with further strikes after the break from Serge Aurier and Kane completing the rout.

United forward Marcus Rashford took to Twitter after to apologize to the club's fans for the team's performance.

"First and foremost I'm a United fan," he said. "This is my club. I'm so proud to wear this shirt but there are no excuses, it's just not good enough and to every single fan around the world that tuned in today, I'm just so sorry.

"You deserve so much better than that. I would have stayed away from social media tonight but you deserve to hear from me during the highs and the lows, there is no hiding.

"I feel horrible but I promise you we will do better."