The art of painting, having lost the battle for gallery space over many decades, has nevertheless won the battle of the streets. Close to the pavement, painting remains a genuinely popular art – however we judge its quality – and the energy and rogue vigour of the genre are undeniable. 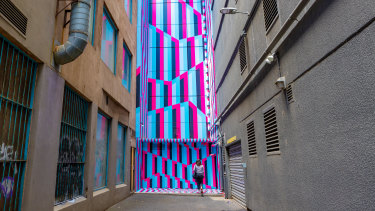 The City of Melbourne has shown cultural leadership in this potentially messy epidemic of imagery and lettering. Under the banner of “Flash Forward” it has curated a large project to redefine 40 of the lesser-known laneways in town. In many cases, the artworks have clinched the aesthetic potential of some otherwise ugly and noisy rear-end architecture.

The most immediately successful of these public-art interventions are those that function as if they’re a kind of architecture in themselves. 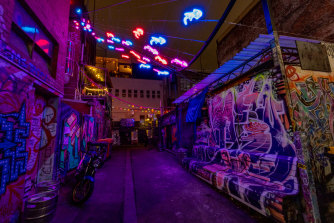 An example is Nick Azidis’s dazzling geometric arrangement in blues, vermilion and black at Highlander Lane. The vertical bars are capped with horizontals, as if proposing perspectives that crash or implode. The patterns command an entire wall but also a section of the adjacent walls and pavement, so that the butt-end of the lane is reconfigured as a high-voltage niche.

A similar buzz arises in a kind of exedra in Goldie Place, which the artist Merda has animated with blue bars that dance over a backdrop of greys. The bland architectural dish is alive with vibrations: the simple contrasts are rhythmically engaging, with a surprising suggestion of depth.

Some of the commissioned works have become iconic, to the point that it’s difficult to imagine the city without them. How could we ever revert to the dire neutral blankness of Parliament Station now that we have the scintillating work by Drez at Ulster Place? The concentric rectangles of spectral blues and magenta have connotations of Op Art or the light installations of James Turrell. They ingeniously invite you to plunge into the network of tunnels below. 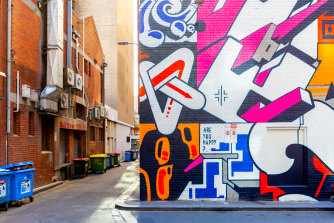 The Evans Lane work for Flash Forward by Puzle.Credit:Puzle / City of Melbourne

All these artists have a strong sense of design – dead expanses of modernist wall have been instantly monumentalised by inventive chromatic abstractions.

But similar things can be achieved with picture-making, as with the illusionistic blocks and faux brickwork by GETNUP at McIlwraith Place. The Empress of artificial rhythmical bricks is George Goodnow, whose fractured string-courses at Tattersalls Lane will make you giddy if you study them too long.

These artists have avoided the pitfall of simply tattooing a large wall with a motif. Instead, they’ve seized the whole of the available area to create a resonant visual architecture in counterpoint to the existing architecture.

The same logic carries across to media other than painting. For instance, Jarra Karalinar Steel has emblazoned the top of a building on Goldie Place with a neon that reads: “You are on country”. This strong First Peoples sentiment is all the more powerful for adopting the corporate language of branding, asserting ownership of expensive urban real estate.

Yandell Walton’s countdown clock has a similarly unnerving effect at Platypus Alley. The display tells us the time remaining till 2030, at which point temperatures are predicted to have risen by a catastrophic amount.

But not all artists work with paint or neon. There are some valuable experiments that treat the laneway as if it were a gallery, where outdoor lightboxes allow photography to flourish in an environment that would otherwise be hostile to it. The presentation of Jessica Schwientek’s laneway imagery is excellent; and so too with the amusing illustrated tableaux of Ruofan Lei in Smythe Lane.

Many works have a striking relationship to their site. I love the margin of wall that protrudes in Corrs Lane, which Sarah CrowEST has marked with arrows and block letters: “Close to the edge”. Her work in Hughs Alley is equally witty; and in fact humour is a large part of the project. The work of Bootleg Comics at Crown Place is funny in an absurdist vein. Reading the images could occupy you for longer than you’d imagine yourself hanging around a blind alley.

With black humour, Bacondrum leads you to a morbid artwork with skulls at the terminal wall of Kirks Lane. It reads “Dead end”.

Many moods and social conditions are represented. I enjoyed Prue Stevenson’s exposé of autism at Little William Street. It’s the kind of affirmative thing that you’d seldom encounter in a gallery.

Find a guide to the Flash Forward artworks at flash-fwd.com

A cultural guide to going out and loving your city. Sign up to our Culture Fix newsletter here.

Tom Thibodeau shouldn’t get all the credit for Knicks resurgence

Arlene Foster 'to quit DUP after standing down as leader'