A new tetchiness is in the air as Victorian Premier Daniel Andrews awaits a federal budget that will offer him billions of dollars for major projects as long as he moves fast to build them.

Andrews looked peevish and dismissive over the weekend when he was asked about a comment Treasurer Josh Frydenberg made suggesting Victorian should "get on with it" and approve more work. 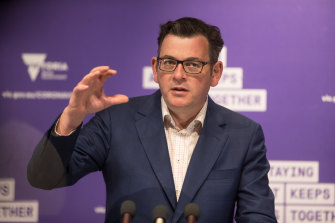 Daniel Andrews tried to send the message he would deal only with Prime Minister Scott Morrison.Credit:Simon Schluter

"Really, I think the Federal Treasurer perhaps needs to be a little bit better briefed and he might start by speaking to his boss," Andrews said.

The Premier was trying to pull rank. Andrews sent the message he would deal only with Prime Minister Scott Morrison, man to man.

But Andrews is going to need Frydenberg on Tuesday night when the Treasurer offers a spending surge that is supposed to lift Victoria, and the rest of the country, out of recession.

Sooner or later, the Premier will want to take the money.

The federal frustration with Andrews is real, and justified. The state government bungled its hotel quarantine regime, leaked infection into the community and saw the state death toll rise to 805.

The federal budget will outline the national cost on Tuesday night. Frydenberg says the Victorian economic closures cost $14 billion in the last quarter. He has no reason to hide the damage.

Yet this message will come with the promise of more federal spending on infrastructure. All Australians have an interest in seeing federal and state leaders work as fast as possible to get new projects under way.

The old sense of co-operation at national cabinet has evaporated, of course. While Andrews said on Saturday he had a "strong partnership" with Morrison, voters can see through that talk.

These two partners were headed for the divorce court as soon as Victoria’s second wave wrecked Morrison’s hope for a swift economic rebound. 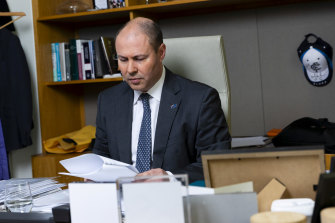 As the deputy Liberal leader and the most senior Victorian in the federal government, Frydenberg has a role in speaking up for Victorians who are unimpressed with their Premier. In fact, his colleagues want him to speak up.

Morrison will be comfortable for that to continue. The same is happening with other states. The most senior Queenslander in federal cabinet, Home Affairs Minister Peter Dutton, leads the criticism of Premier Annastacia Palaszczuk. The most senior West Australian, Finance Minister Mathias Cormann, has been taking on Premier Mark McGowan over the state border closure.

Premiers might think they can complain to the Prime Minister, but it is unlikely to do them any good.

Our weekly newsletter will deliver expert analysis of the race to the White House from our US correspondent Matthew Knott. Sign up for The Sydney Morning Herald‘s newsletter here, The Age‘s here, Brisbane Times‘ here and WAtoday‘s here.

Amy Hart on life, love and who the most famous person on her phone is