Allyson Massey didn’t think twice when she decided she wanted to be the one to propose to her long-term partner, Stephen Krishna.

After months of planning she popped the question, ring in hand, over a surprise picnic in Sydney’s Royal Botanic Gardens in January, complete with a romantic slideshow she’d compiled, pillows and champagne. 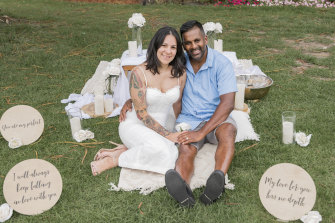 Allyson Massey and Stephen Krishna after the proposal at the picnic.Credit:Unforgettable Proposals

“It was really, honestly, the best day ever,” says Massey.

But while she says family and friends are excited and supportive of her decision to propose, she has been “baffled” by a simmering level of shock, with some people asking if she feels she has missed out.

“I’m surprised it’s such a big deal in this day and age,” the 40-year-old says. “I really wanted to create that moment for [Stephen] … and it was the most magical time. I didn’t miss out on an absolute thing. I knew he wouldn’t be offended by it.”

It comes as Sheryl Sandberg, Facebook's chief operating officer and bestselling author of Lean In, says on a NBC News podcast that the days of women waiting for men to propose should be over, taking aim at what she describes as “inequality” in relationships. 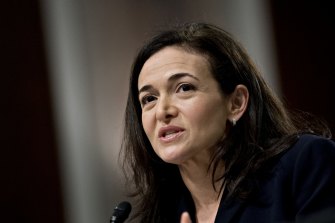 The legalisation of same-sex marriage in Australia in December 2017 has naturally led to a rise in women proposing – to other women.

But in straight relationships, the ritual of proposing remains overwhelmingly male-instigated. A 2019 survey by US wedding planning website The Knot found that only 3 per cent of brides had done the asking.

Ms Massey enlisted the help of company Unforgettable Proposals to pull off her engagement to Mr Krishna, 47, and founder Samantha Davies says female-to-male proposals make up only a small minority of her business. They get about 200 men proposing to women each year, versus only about two for the reverse. 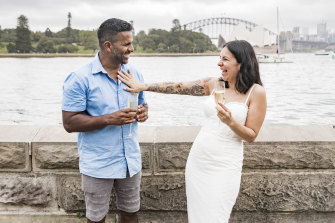 Davies says there has, however, been a spike in inquiries from heterosexual women in 2020 – so far almost a dozen – which she puts down to it being a leap year. The leap year tradition, which “permits” women to propose to men through the 12-month period, is said to date back to fifth century Ireland.

Yet it seems it’s still sticking. Davies thinks this means women are ready to do the asking but many men aren’t comfortable with the idea, making the leap year a “perfect excuse”.

“It’s not that women feel they can’t do it and they’re unconfident, it’s more about men being weird about the ladies proposing to them… They feel it’s their job.” 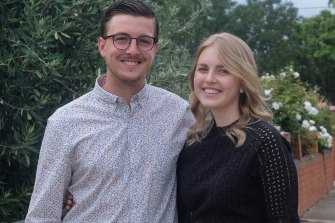 Sasha Anthony, 25, and Dakota Bastow, 24, outside their home in Altona.Credit:Luis Enrique Ascui

Then there's the risk of public criticism. Sasha Anthony, 25, proposed to Dakota Bastow, 24, at an open-air cinema in Melbourne in 2017 by screening a video she had filmed with him months earlier under the guise of a competition.

“I figured why don't I do it just how I imagine it?” she explains.

Anthony says they were both over the moon and she was “really proud”, but she found herself unexpectedly bruised by Facebook comments calling her decision “weird” and saying Dakota should have “manned up”.

“I was really annoyed and frustrated that that’s how it was seen… I did it because I wanted to do it.”

My Proposal Co helped Anthony with the execution of her engagement, and company co-creator Tania Saad says she sees very few female-to-male proposals.

“We're surprised that even though we live in a time where women can do anything men can do and traditional gender roles are slowly disintegrating, women still feel they have to wait for their boyfriends to propose.”

University of Melbourne sociologist Lyn Craig says while it may appear strange at first glance that proposals remain mostly male-driven in straight relationships, societal gender norms are not changing as quickly as many may believe, pointing to the gender pay gap as an example.

“I’m not really surprised. We are still a very gendered society,” Professor Craig says. “The ceremonial aspects of marriage have not diminished even though practical aspects have changed.”

Anthony Burke, president of the Australian Federation of Civil Celebrants, says he has seen only one couple where the bride proposed to her groom in his 11 years officiating weddings. In his experience, they are still steeped in old customs, such as brides being given away by a male figure, and proposals are part of that.

Professor Craig believes we haven't seen a rise in women proposing to men because there remains a perception that a woman only does the asking because the man is stalling. She adds there can also be a belief that women who display the same confidence as men are “pushy and emasculating”.

She hopes, as culture continues to shift, the expectation around men proposing changes: “There's no logic in it.”

Influencers Are Still Getting Lip Fillers and Botox During Lockdown

Lorraine opens up on devastating past miscarriage and details her heartbreak: ‘It never leaves you’