Woman, 39, reveals she remained a virgin during her 12-year marriage because of a condition that makes it too painful to have sex – but has finally managed to be intimate twice with a new partner

A bride who was a virgin when she got married has spoken candidly about the agonising condition which left her unable to consummate her union as a newlywed and resulted in a sexless 12-year marriage.

Raised in a Christian household where sex before marriage was banned, it took more than five years after her first failed attempt at intimacy with her ex-husband before Kendra Blair, 39, from Oak Grove, near Kansas City, Missouri, was diagnosed with vaginismus.

The condition causes the vaginal muscles to suddenly tighten when penetration is attempted and can be painful and distressing.

In the meantime, when the hospital insurance verifier tried to have sex, she felt an extreme burning sensation, which made her so distressed she would even hyperventilate. 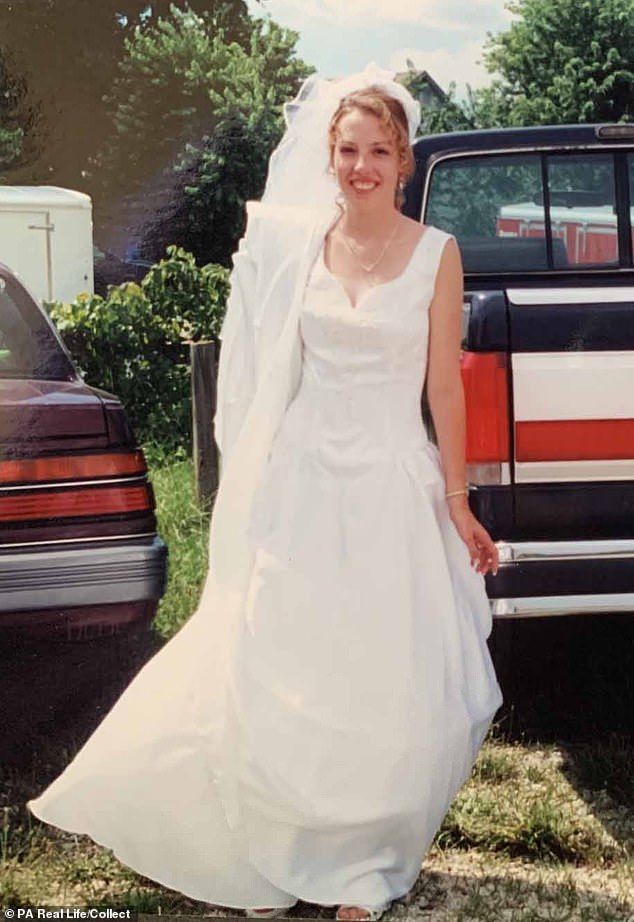 Kendra Blair (pictured on her wedding day), 39, from Oak Grove, near Kansas City, Missouri, has spoken candidly about how her condition left her unable to consummate her former marriage 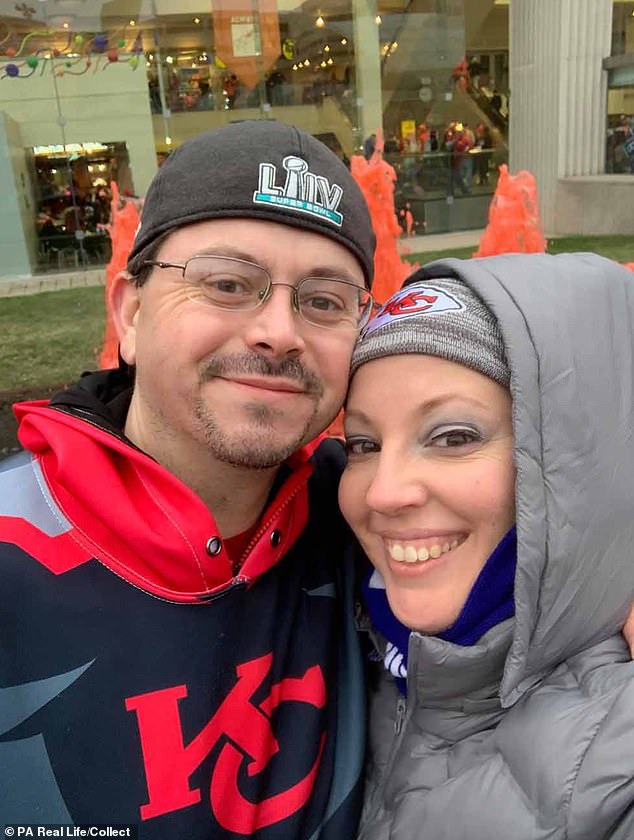 After her marriage ended in 2012, Kendra met her boyfriend, Sean Rice (left with Kendra), 38, who works for a plasma donation company, and the pair will be celebrating their first anniversary in May 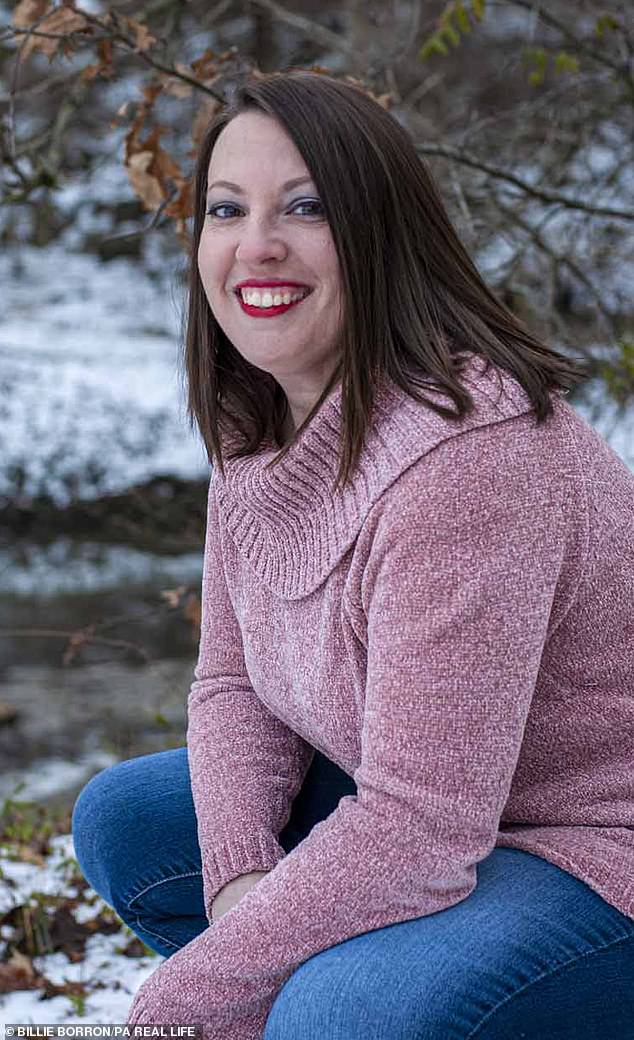 The hospital insurance verifier, who would experience an extreme burning sensation when she tried to be intimate with her partner, was diagnosed with vaginismus

Just 19 when she tied the knot, Kendra said: ‘We tried to have sex when we went to bed the day after our wedding, but it just wasn’t happening.

‘I thought I was just nervous, because I didn’t know what to expect. I grew up in a very strong Christian conservative home and sex wasn’t something anyone in my family ever spoke about.

‘But when I tried to have sex, it felt like there was a bone there that my husband couldn’t get through.’

After months of struggling to have intercourse, eventually Kendra called her mother to ask for advice.

‘She thought maybe I had a thick hymen – the skin surrounding or partially covering the vaginal opening – and just needed to really relax,’ she said.

‘My husband and I had endured months of frustration and I knew there was something else wrong, but everyone just kept telling me to relax.’

Eventually, Kendra confided in her then husband’s stepmother, who took her to see a gynaecologist.

But the doctor’s examination triggered the same reaction as her attempts to have penetrative sex.

She said: ‘My automatic reaction was to hyperventilate, close my legs, squirm to get away and push the doctor away saying, ”Don’t touch me”. 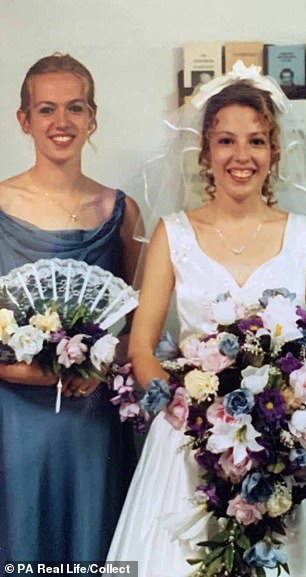 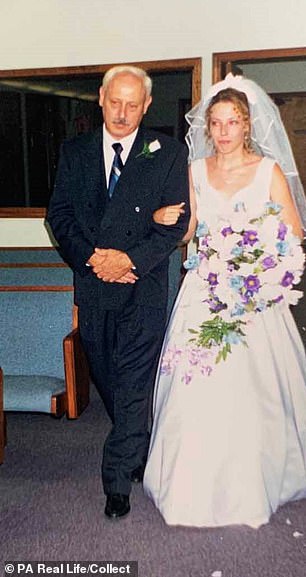 Kendra, who was just 19 when she got married (pictured with family on wedding day left and right), said that she and her former partner tried to have sex the day after their wedding but were unable to 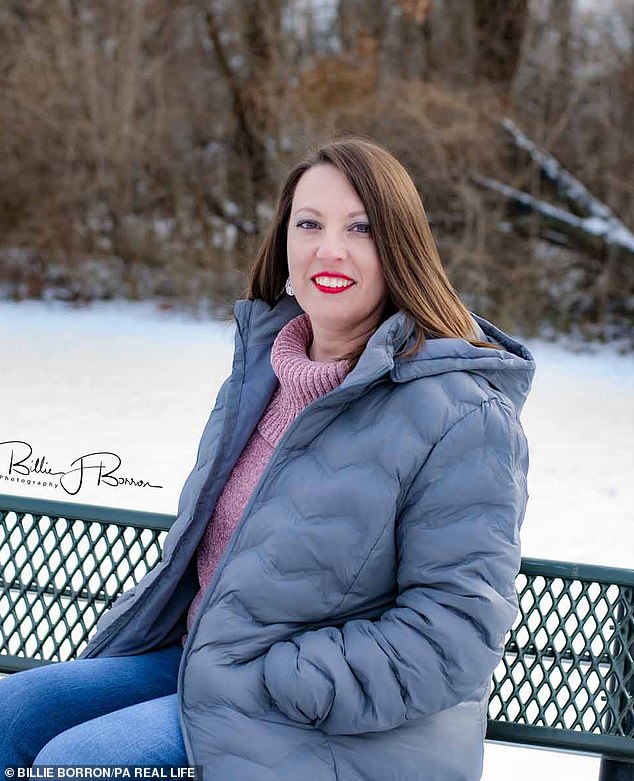 Kendra, who was raised in a Christian household where sex before marriage was banned, said it took more than five years after her first failed attempt at intimacy before she was diagnosed with the condition 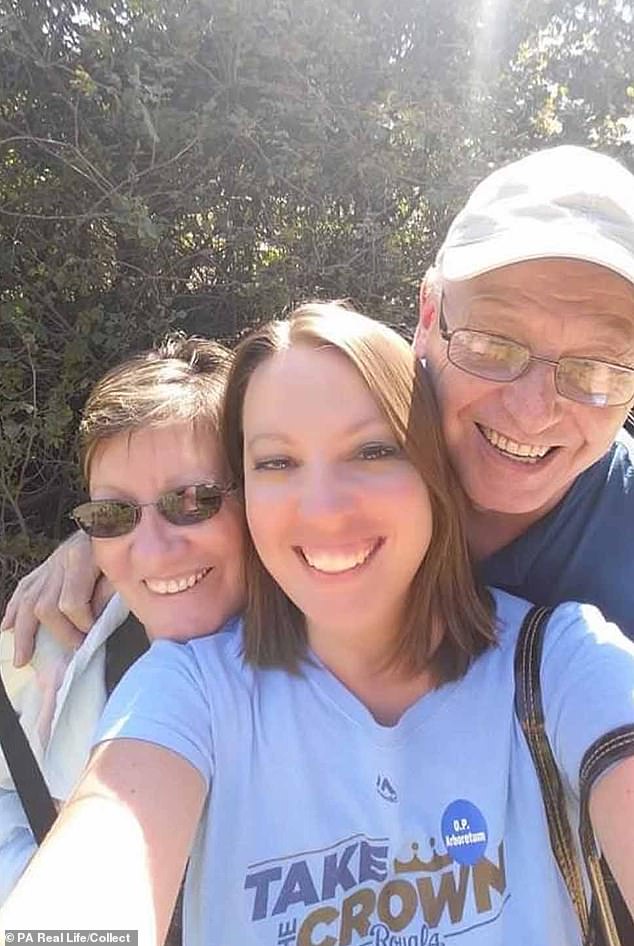 After months of struggling, the hospital insurance verifier (pictured with her parents), called her mother for advice

‘She told me I’d have to make another appointment and they would put me out, so she could examine me, but I didn’t, because she also told me just to relax and stop overreacting.

‘She had no idea what the problem was, but I saw her smirk and, whether I was right or not, it felt like she was making fun of me.’

Five years passed before Kendra plucked up the courage to see another doctor, during which time her condition started to affect her marriage.

She continued: ‘It did affect our relationship badly and we ended up splitting up after 12 years.

‘We had other issues going on – not just the sex – so we didn’t get divorced just because of vaginismus, but it was a factor.

‘My ex started getting bitter and resentful towards me because of it. Unsurprisingly, he was very frustrated and questioned whether I was holding out on purpose. 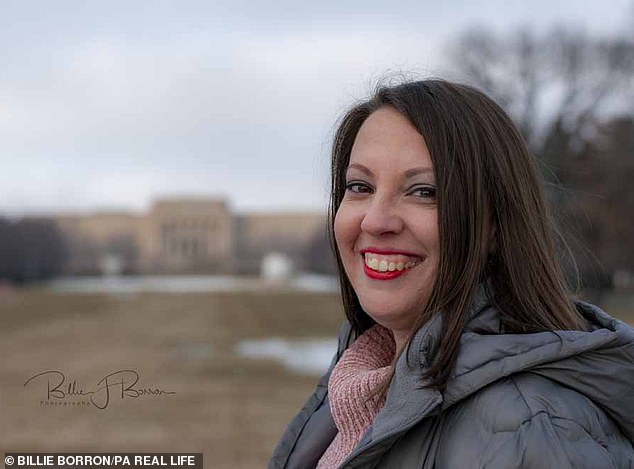 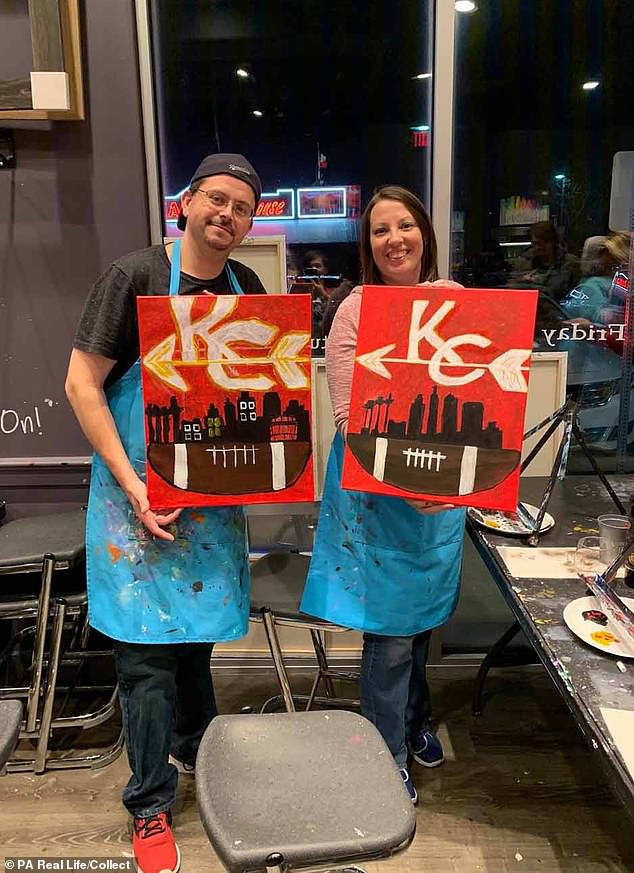 ‘I think this was because, after a while I stopped wanting to work on it. I didn’t want to try to have sex because it causes a really agonising burning pain and that’s not fun.’

Meanwhile, the second doctor Kendra saw, who diagnosed her with vaginismus, had told her to use dilators to stretch and retrain the vaginal muscles.

‘I felt some relief when she told me what I had, because it proved I wasn’t crazy,’ she said. ‘She also told me I was not the only one that had this.

‘But I was scared about using the dilators, because I couldn’t even insert a tampon.

‘Despite his occasional frustration, my then husband was pretty supportive. He stood by me more than a lot of men would, considering that we didn’t have sex for 12 years.

Treatment may include exercises to help the body get used to penetration, relaxation techniques, pelvic floor exercises and talking therapy to help manage your feelings

‘He was getting impatient, though, and had started putting a timeline on having kids. I understood his frustration, but it felt like extra pressure.

‘I tried the dilators but failed. I couldn’t get any of them in – not even the smallest one which was the size of a small tampon. I just couldn’t do it. It was too painful. It seemed like nothing was going to work.’

Despairing, Kendra sank into depression – fearing she would never have a normal sex life.

She said: ‘There were days when I even thought about dying. I’d even tell my husband to go and have sex or kids with someone else.

‘I didn’t want that, but I just felt so frustrated.

‘It didn’t help that I was getting older and people were always asking why we didn’t have kids yet.

‘I’ve always wanted to be a mother, but the vaginismus was preventing me from getting pregnant.’

As Kendra’s problems persisted, her self-esteem took a monumental battering.

She said: ‘Not being able to have sex and fall pregnant – things other people take for granted – left me feeling isolated and broken.

‘This condition really messes with you mentally. Normal conversations you hear day to day – about someone being pregnant, or people talking about having sex – make women with vaginismus feel really messed up. 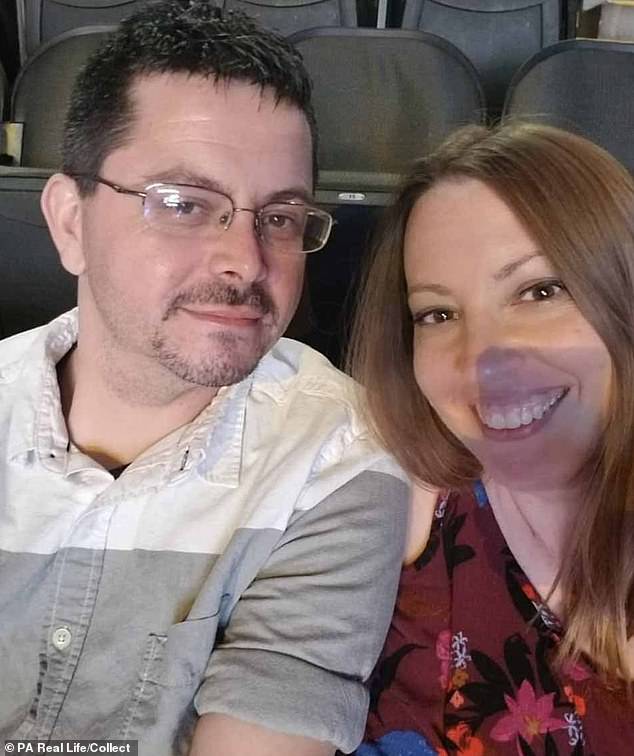 Kendra and Sean, who now live together, will soon be celebrating their first anniversary in May

Sadly, Kendra’s marriage ended in 2012, after which dating was an ordeal.

She said: ‘I had decided to talk about the vaginismus within the first three dates with a man.

‘If I waited longer than that it felt like I was being deceitful.

Then last year, she met Sean Rice, 38, who works for a plasma donation company.

‘I seem to remember chatting to Sean online and sending him a text about it before we even met,’ she recalled.

‘He said, “I’m not in it for the sex, I want a relationship with you. We can deal with this down the road”.

‘It was an amazing response and one you don’t get very often.’

The couple, who now live together and will be celebrating their first anniversary in May, have now had penetrative sex twice, according to Kendra.

And she puts it down to a combination of Sean’s sensitivity and her finding a Facebook support group in 2017 with over 2,000 other sufferers, with whom she has shared stories about everything from diagnosis to treatment.

Kendra said: ‘My confidence has been boosted a little bit,’ she said. ‘I don’t feel as broken as I once did.

‘I’ve been able to have penetrative sex a couple of times, so that’s made me feel less guilty and less like I’m stopping Sean from doing something he wants to do.’

Kendra claims that the physical therapy recommended by people in her Facebook group has helped her to become mostly cured.

It involves performing pelvic floor exercises to stretch out the vaginal muscles, as well as practising insertion with dilators.

‘I knew physical therapy was an option and something I should have considered doing, but I didn’t have it before this because I had no idea what to expect,’ she admitted.

‘When I joined the vaginismus support group, a ton of women had already been going to physical therapy and shared their experiences. That kicked me into action. – they took the fear of the unknown away from me.’

‘I then tried dilating and got to one of my largest dilators with no pain,’ she said. ‘It felt amazing. At last I didn’t feel broken, as I’d clawed back a bit of control.’

Kendra fears that many sufferers are still self-diagnosing, because they are not taken seriously, even by the medical profession.

She said: ‘A lot of women diagnose themselves, because they see the doctor and get told they’re overreacting.

‘Luckily, physical therapists seem to know all about it and are very sympathetic, but, in my experience, doctors often aren’t.

‘And it’s very belittling to be dismissed.’

Now on a mission to raise awareness of vaginismus, Kendra has started her own Facebook support group, which has some 70 members.

But her own therapy is proving a lengthy process, with her often taking one step forwards and two back.

‘I’ve met some women who’ve been able to dilate and once they’ve got past a certain point have found it’s never happened again,’ she said.

‘But for some of us, we progress and then we have a “bad muscle day” and go backwards, which can leave you feeling down in the dumps.

‘Along with the physical therapy, I also practice dilation at least five times a week. I find this a struggle, though, because it’s not at all enjoyable.’

While she is not cured, however, Kendra hopes the progress she has made is taking her one step closer to achieving her dream of having a child with Sean.

She said: ‘I’ve always dreamed of being a mother and so have always felt a void there.

‘I’m worried about my age now, but Sean and I have decided if we can’t have our own biological child over the next couple of years then we will adopt.’

Praising Kendra’s progress, Sean said: ‘I think Kendra is an amazing woman. Feeling broken can be tough and I try to be there for her and give her encouraging words and help her not feel so isolated.

‘Being open about it is cathartic for her. Not understanding her own body must been really difficult. Her being open about it and honest is amazing and it helps to build her confidence – and that’s what she needs.’

If you suffer from vaginismus you can visit Kendra’s FB support group here.