Two years ago, Jane Chika Oranika posted a Twitter video of a freestyle rap verse admonishing Kanye West’s political antics — over West’s own “Jesus Walks” beat, no less. It’s been viewed more than 6 million times. But the 23-year-old from Montgomery, Alabama, says that even if she hadn’t gone viral for her hip-hop songwriting, she would’ve found another way to get her activism across to the world.

“Whatever occupation I landed in, I would’ve used that position to say the words that need to be heard, and to stand up for what I believe in,” she says. “Yes, hip-hop is wonderful and it always has been, but on a human level, I’d always have to say something.”

Born to Nigerian immigrants and raised her whole life in the South, Chika describes her upbringing as a black, queer, plus-size woman as “no joke.” As a teenager, she got in trouble in school for putting up a “Black Lives Matter” flag in the hallway. “I remember the shift between my mom being mad about that to her understanding,” Chika recalls. “I explained to her that I felt like my dad could’ve been Eric Garner, and that I had to say something. My parents have always heard me out for that reason.”

Chika got into Berklee College of Music, but couldn’t afford tuition; after spending a year at University of Alabama, she dropped out to pursue music full-time, utilizing social media to get her voice out there. Soon everyone from Cardi B to Wale was sharing her videos, even before she signed to Warner last July.

Chika is wary of being more known for social-media “moments” rather than for actual songs or songwriting, and she says that she’s taken efforts to “let moments die” when she no longer wishes them to be in the spotlight.

“People who have gotten known on the internet, they’re pigeon-holed as influencers, and looked at as an Instagram presence rather than as an artist,” she says. “And for me, I’ve been making music since I was two. Having virality and these moments that were really cool….it’s a process, I guess, in order for the actual artistry to shine through. I know my journey is far beyond what I’m doing currently.” 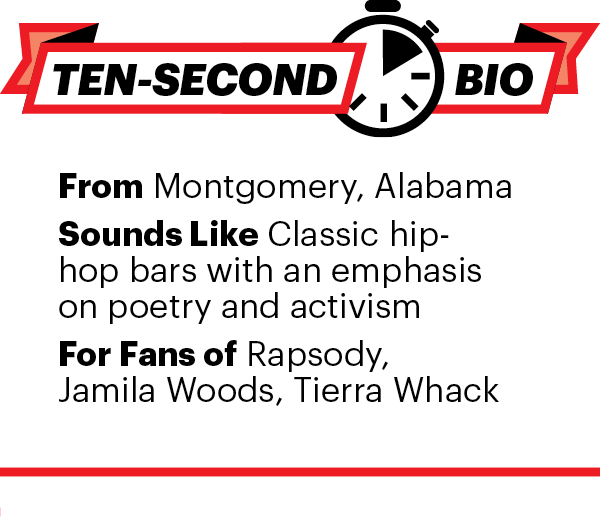 Indeed, listening closely to the content of Chika’s work makes it clear that her approach is way more old-school than those digital origins might suggest. Her introspective lyrics and traditionalist flow often contain socially conscious messages, like in the autobiographical “High Rises,” but she’s also got a knack for composing tender love songs, such as the Charlie Wilson-featuring “Can’t Explain It,” which follows her path from nervously crushing on a girl at a party to finding her confidence as a lover and partner. When it came time to shoot the music video, Chika reached out to an ex-partner to star alongside her.

Still, it’s her most politically conscious verses that have so far gained the most attention. During an episode of Jimmy Kimmel Live! guest-hosted by Lena Waithe, Chika was invited to perform “Richey v. Alabama,” a searing freestyle about recent anti-abortion legislation passed in her home state.

“It moved me enough that I wanted to talk about it,” she says. “I have friends who have experienced abortion in Alabama, who have actual stories. My good friend actually made a short film called Forbidden Fruit about this story. Even though hip-hop is my occupation, I would’ve done something no matter what. If I was a doctor, I would’ve protested.”

Chika has spent the past year in L.A. working on her debut EP, Industry Games. She calls it “my entire 2019 summed up,” with all never-before-heard tracks and next to no collaborations — just Chika, plain and simple. “It’s called Industry Games because I don’t want to play them,” she says. “It’s my evolution story. It’s like an inside look into who I am.”

She adds, “I’m super excited to share it, and for everyone to genuinely get to see a little bit more into my brain and my heart. I delve into a lot of personal things, where I’ve been at and mental health things and friendship…I think my EP will be like my child. I’m going to look back on it and be like, ‘Wow, we did that, and look where we are now.’”

Angelina Jolie Reveals What Family Time Looks Like in Her Household

Who is Hans-Dieter Flick? Everything to know about Bayern Munich boss who replaced Niko Kovac