Great Britain's Olympic breaststroke champion Adam Peaty has led the reaction to Sun Yang's eight-year ban from the sport, saying he was disrespecting the sport and his country after a second run-in with anti-doping bodies which has now cost him his career.

The Court of Arbitration for Sport banned the Chinese star for his role in tampering with a doping sample. The decision was handed down on Friday night after an appeal by the World Anti-Doping Agency (WADA), who objected to a FINA ruling that allowed Sun to continue swimming after a vial of blood was smashed during an out-of-competition test in September 2018. 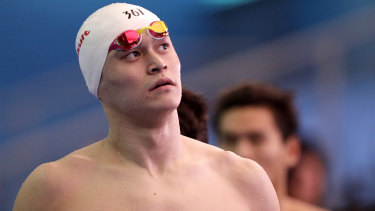 Peaty, a world record holder and Olympic gold medallist, has become a leading voice for clean sport and reform in swimming and said anyone that was found to have anti-doping issues twice was a 'fool'.

"For anyone that’s been banned once, potentially it’s a mistake. The odds are yeah – you could have taken any supplement or whatever," Peaty told Swimming World magazine.

The ban is a bombshell result which ends a tumultuous career that saw Sun win three Olympic gold medals and sparked a bitter rivalry with Australia's Mack Horton. Sun is China's most popular athlete – a genuine megastar to his millions of fans – and the reaction will be substantial from the Olympic heavyweight nation. 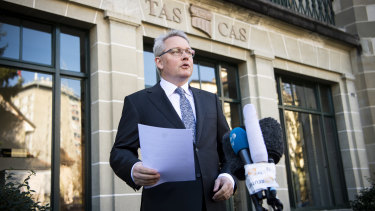 General Secretary of the Court of Arbitration for Sport, Matthieu Reeb, delivers the verdict in the case of Chinese swimmer Sun Yang.Credit:AP

In the ruling, CAS said Sun tampered with the sample, which carries an eight-year penalty, and he "failed to establish that he had a compelling justification to destroy the sample collection containers". But given subsequent tests were negative and FINA did not give him a provisional ban, his results until Friday's finding will all stand, meaning he will retain his World Championship gold medals.

WADA released a statement saying they welcomed the ruling and that they were now satisfied 'justice had been rendered'.

"The World Anti-Doping Agency (WADA) welcomes the ruling of the Court of Arbitration for Sport (CAS) in relation to WADA’s appeal against the Fédération Internationale de Natation (FINA) disciplinary panel decision in relation to an incident that led to a doping control involving Chinese swimmer Sun Yang not being completed as planned," WADA said.

"WADA had lodged the appeal on the basis that Sun Yang voluntarily refused to submit to sample collection as per the terms of the World Anti-Doping Code (Code) and the related International Standard for Testing and Investigations. WADA notes the sanction handed down by CAS and is satisfied that justice in this case has been rendered."

ASADA chief David Sharp said it was a verdict that may help restore some confidence in the global anti-doping machinery.

"ASADA welcomes the CAS decision as it restores faith in the anti-doping system. We hold our athletes to the highest possible standards and we expect that those standards are upheld globally," Sharp said.

Horton has refused to buy into the matter but in a statement said: "My stance has always been for clean sport. It is not, and never will be about individuals or nations. Today’s outcome does not change my stance."

The verdict will also shine a light on FINA's handling of the matter, which was widely criticised ahead of the World Championships and after full details of the aborted test had came to light. 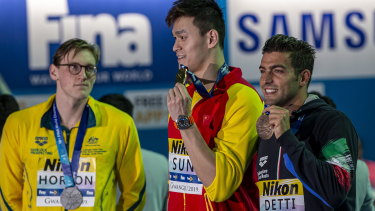 Mack Horton kept his distance from Sun Yang during the medal presentation at the Gwangju 2019 FINA World Championships,Credit:AAP

Instead of a two-year ban, Sun was sidelined by China's anti-doping agency for just three months, a ban which was only announced after it had been served and just before another golden run at the 2014 Asian Games and Chinese national championships.

That heightened suspicion among his fellow swimmers, while his mannerisms in and around the pool deck made him less than popular with rivals. That came to a head before the finals of the 400m in Rio, when Horton called Sun a 'drug cheat' then went on to win gold, citing it as a win for the 'good guys'.

Horton was swamped by abuse from Sun's millions of Chinese fans but refused to back down. It would be just the start of a simmering feud that would go to even great levels three years later in the wake of Sun's dramatic incident with drug testers in September of 2018.

After questioning the validity of the the officials charged with taking blood and urine samples during an out-of-competition test at his home, Sun's mother was alleged to have ordered security guards to destroy a vial of Sun's blood with a hammer.

No sample was taken for testing and a FINA doping panel would controversially let Sun off with a warning and not a ban. Soon after the matter was made public in the media, WADA appealed the matter to the Court of Arbitration for Sport and have now got their man.

That matter was still waiting to be heard when Sun appeared at the FINA World Championships in South Korea in 2019. It created a storm of protest among vocal swimmers and Horton took the lead once again, refusing to share a podium with Sun after the 400m freestyle final.

Scotsman Duncan Scott was another that wanted nothing to do with Sun on the podium, refusing to shake hands and pose for photographs after the 200m freestyle final.

After that moment, Sun taunted Scott by shouting: 'You're a loser, I'm a winner." The tables have now turned for good.

The truth about how often you should change your pajamas