The stars of the new TV series promise “lots of blood,” another “insane” turn from Jennifer Tilly and a Chucky so “real,” it freaked them out on set.

Welcome to primetime, bitch. Okay, those words were actually uttered by another horror icon — Freddy Krueger in “Dream Warriors” — but they’re pretty apropos for the “Child’s Play” franchise, as it ventures into television territory for the first time.

Premiering this week, “Chucky” continues the saga started more than 30 years ago by Don Mancini … a saga that has somehow managed to keep its continuity up across seven wildly different films. What began as a film about a doll possessed by the soul of a serial killer terrorizing a little boy and his single mom has since followed Chucky to military academy, found him a bride in Tiffany and even given him a transgender child.

The series embraced its campiness even more when Tiffany possessed the body of the actress playing her, Jennifer Tilly, before Chucky had his soul split between an army of Good Guy dolls and Fiona Dourif’s Nica Pierce — who is played by the real-life daughter of Chucky himself, Brad Dourif.

Yeah, it’s been a wild ride so far, but the franchise shows no signs of stopping as the past and present collide on the new SyFy and USA series. While the show will bring back faves including Tilly, Fiona and the actors who played Andy and Kyle in the original films — Alex Vincent and Christine Elise, respectively — they’re also joined by a new cast of young blood. 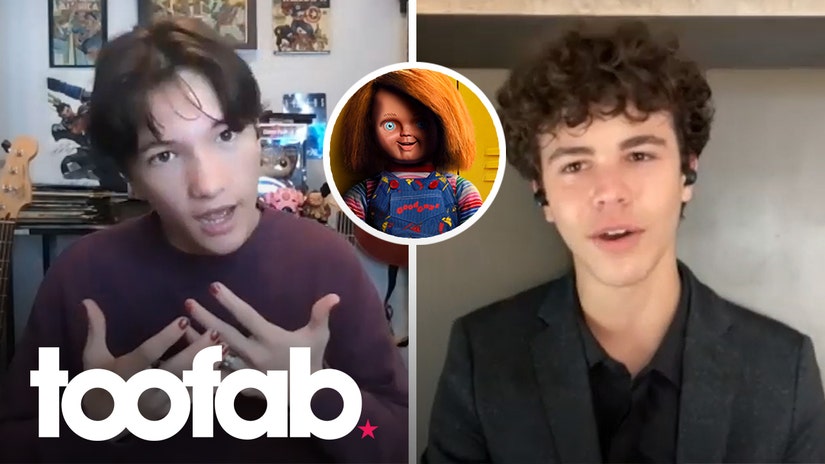 Starring on the series are Zackary Arthur, Teo Briones, Alyvia Alyn Lind and Bjorgvin Arnarson as four of the new teen characters it revolves around. Arthur plays Jake, the franchise’s first gay protagonist and central figure inspired by Manicni himself. He’s surrounded by bullies and love interests, who may be forced to team up together to take down the killer doll. And most of them aren’t only new to the franchise as actors, but viewers too — as none of them were even born before “Seed of Chucky” was released in 2004.

“When I was younger, my parents didn’t really want me to be watching super, rated-R movies, but I remember when I was younger, the kids who got to watch these movies, were the cool ones,” Arthur told TooFab. “It’s so much better now that I’m actually in it, and my mom can’t do anything about it!”

Neither Briones nor Arnarson had really seen any of the films either before they landed a job on the show — but quickly studied up when they learned they were cast. “I went and binged all of the movies,” said Briones, who went on to call “Cult of Chucky” his favorite because of the creepy asylum setting. Arnarson wound up marathoning all of them with his father before getting to work.  While Lind had “obviously” seen them all before she even auditioned, she put her two-week mandatory quarantine period in Canada before filming to good use by refreshing her memory — starting with Bride, then watching Seed, Curse and Cult before going back to the OG “Child’s Play” films. She too, by the way, appeared the enjoy the newer ones most.

After landing the lead role on the show, Arthur would get an additional layer of pressure added to him when he learned his character was inspired by Mancini’s own years as a gay teen.

In addition to dealing with common teenage issues like bullying, questions about sexuality, first crushes and pressure from parents, this foursome also, of course, has another wrench thrown into their lives in the form of a 29-inch terror with a one-track mind for homicide. While the mini-maniac comes to life with ease on screen, it takes a team to make the intricate puppet do his thing behind the scenes — so, just how scary can he be when you see what really makes him tick? 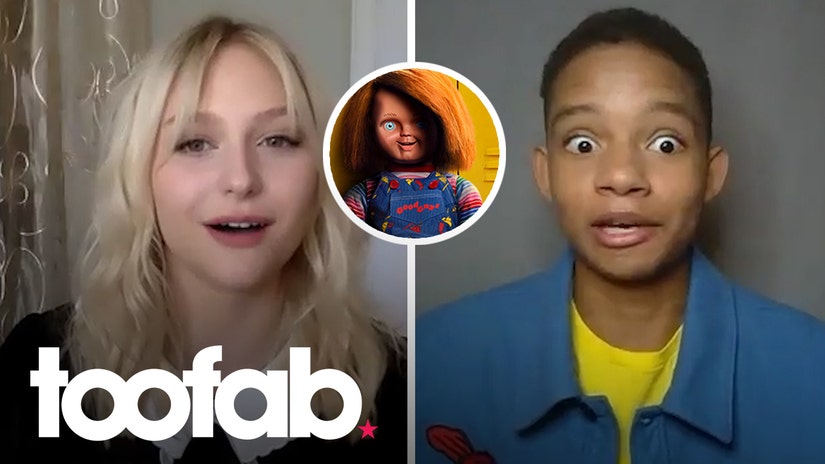 “Just because you can see the people operating it and you know the puppetry, it does not make it any easier to deal with. Dude’s freaky, there’s something about him,” said Arthur. “I think it’s his eyes, I don’t know, it just freaks me out, man. And especially because they have the original look back, but they’ve changed the way it kind of works, so he’s got tons of more expressions and it’s … it’s freaky man, it’s all I gotta say it’s really freaky.”

Briones applauded the puppeteers for doing such a killer job “at making him feel real that you never have to try to convince yourself” of that fact. “Once you know the director yells, ‘Action!’, you’re just in the scene with Chucky and he feels real.”

“It felt like we were acting with a killer doll,” he added.

“He’s a great actor,” said Lind. “It’s so much fun working with him and getting to watch the puppeteers work and do all of this amazing all the technology, it blows my mind. I can never comprehend it. But getting to work with the doll and this iconic figure at the same time, it’s been really fun.”

Arnarson even said he did, on occasion, actually get scared of the tiny terror on set. “Sometimes, especially in toy mode, he’s just kind of … I don’t know, I don’t trust it,” he added. “He’s looking at me!”

And with Chucky and those freaky eyes comes “lots of blood,” promises Briones.

“So in the makeup trailer, we started this thing where we have a kill wall,” added Lind. “So basically every single time somebody died, we take their picture up on the wall, and it kind of became like a joke with everybody because everybody was drawing things to put up. It became this like really big thing by the end of the show, we never realized how many people are dying until you put all their pictures up on one wall. Yeah, by the end of the show it was a pretty big wall.”

As for where some of the OGs will fit into the big picture here, don’t expect too many details here. While Briones couldn’t reveal much about how he and Tilly’s Tiffany wind up together, he did confirm he has quite a few scenes with her in the second half of the season.

“She is so amazing. She’s the sweetest person ever,” he told TooFab. “But it’s funny because she’s so amazing at playing an insane person, but she’s so sweet. She’s so funny and she’s so talented yet working with Jennifer was, it was amazing. One of my favorite actors I’ve ever worked with.”

Added Lind: “I’s been super fun to kind of get to know all of these people who are a part of this iconic franchise, and they have been so welcoming. They welcomed us into this world, open arms and they have been the sweetest to us.”

“It’s kind of intimidating when you’re joining this franchise that is so popular and you don’t realize how big the Chucky following is until you’re actually in it,” she added. “So many people are obsessed with this spooky doll. So getting to you know work with people who’ve been working with it for years was so much fun and such an honor.”

SATURDAY ESSAY: No more hiding the truth about Covid

A Comprehensive Guide to All of Hailey Bieber's 20+ Tattoos