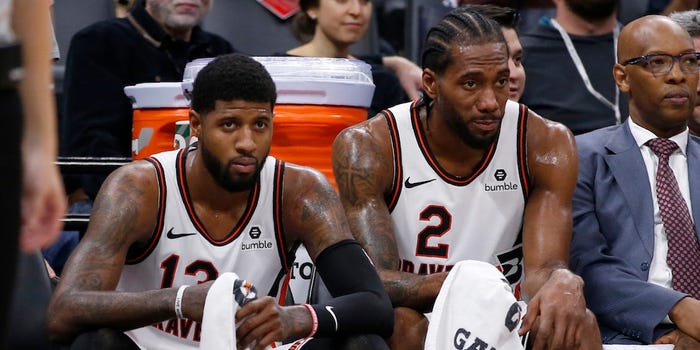 The 2019-20 LA Clippers never quite jelled, in part, because of the preferential treatment of Kawhi Leonard and Paul George, according to The Athletic's Jovan Buha.

Leonard and George, of course, were the two big offseason acquisitions for the Clippers in July 2019. Landing the two All-Star forwards to a team of versatile roles players immediately pushed the Clippers to the top of the championship race.

According to Buha, Clippers teammates, particularly hold-overs from the surprise 2018-19 playoff team, bristled at the star treatment Leonard and George received. Such privileges includes their own trainers and security teams, influence over practice and travel schedules, and looser media obligations, which left other teammates to be the de facto voices of the team.

Buha previously reported in October that Leonard was also allowed to live in San Diego, which often made him late for team events such as flights.

Leonard also received his own private training rooms before games, according to Buha, sometimes taking up female locker rooms that left female employees without access to the locker room for segments of time. The Clippers denied to The Athletic that employees were ever dismissed from spaces for Leonard's stretching.

Between injuries and load management, Leonard and George only played together in 37 of the Clippers' 72 regular-season games. According to Buha, the light schedules for the star players bothered teammates who had helped create a hard-working, gritty culture within the Clippers in the seasons prior.

One team source told Buha: "How do you ever build a strong team with that shit going on? I thought from the beginning, 'We're doomed. Kawhi wants too much special treatment.'"

In January, former Clippers big man Montrezl Harrell — who signed with the Lakers in free agency — made postgame comments that raised eyebrows and revealed the cracks in the foundation.

"We're not a great team," Harrell said after a loss. "We just came together this year. We got two players that haven't never been a part of this team last year. We have a player that won an NBA championship with a whole nother team last year. We're not a great team. I think that's what we need to realize and wake up. We're a team that still has to figure out things to win, night in and night-out."

According to Buha, both Leonard and George are introverted. The Clippers lacked vocal leaders to rally a team that had little chemistry. Buha wrote:

The Clippers ultimately parted ways with head coach Doc Rivers, who had a poor coaching performance in the playoffs and was criticized by some players for allowing Leonard and George to dictate their playing time. They promoted assistant coach Tyronn Lue to head coach, hoping he can hold Leonard and George accountable as he did with LeBron James when the Cleveland Cavaliers won the championship in 2016.

Hanging over the team is the specter of the 2021 offseason when Leonard and George can both become free agents.

What is Dogecoin and why is it going up?

Why Dax Shepard at first wanted to keep relapse a secret

Where is Gary Dobson now and why did he kill Stephen Lawrence? – The Sun