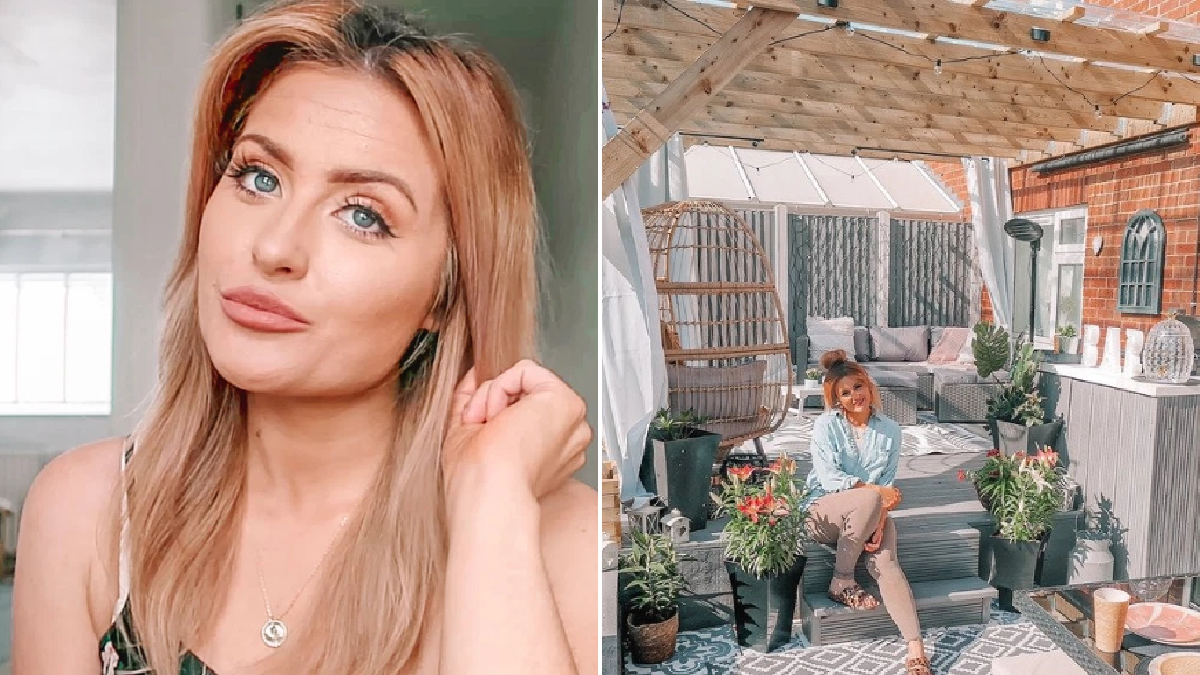 For obvious reasons, stylish outdoor space is all the rage – and with summer hotting up, more people are creating their dream gardens.

One couple has transformed the decking in their back garden into a stylish pergola with outdoor seating, barbecue and film area – perfect for summer gatherings.

Carly Walley, 32 from Nantwich, embarked on the project with her partner Peter during what she described as a ‘very wet, awful week’.

‘The decking outside looked absolutely awful before, it had a permanent puddle in the middle and never looked quite finished,’ Carly told LatestDeals.co.uk.

‘When we first moved in, this area of the garden was a horrible patch with just soil. Although we added stones it didn’t look right so we decked over it last year, and now we’ve gotten around to finishing it.

‘As well as deciding to finish the space with a pergola and barbecue area, we also wanted to work on the patio. When we moved in, it was made up of awful, odd, mis-coloured and mis-matched slabs.

‘We had painted it a block colour as a temporary fix, but I was never happy with it. Now we’ve totally transformed the area without the huge cost to go with it.’

Carly picked up a number of bargains from Dunelm, Home Bargains, Aldi, Amazon, B&M and B&Q.

‘First I picked up two artificial hanging baskets from Dunelm, called white topiary balls, for £12 each,’ she says. ‘I also got a basket from there for £12 for keeping throws in. It has a macrame pattern and it will go inside when the weather is bad.

‘While I was shopping at Dunelm I also picked up some placemats which were pretty cheap – I wanted something which wouldn’t cost the earth. These were £4.25 for four in black woven fabric, and I got them to go on the outdoor table alongside various items from B&M.

‘We also added a parasol  to our outdoor dining table from B&Q. I thought it was really inexpensive at about £150. I don’t think the price is bad considering it is massive. We’ve had the table and chairs with the outdoor seating for years and years, they are from Argos.

‘All of the table decor, including the plates, are from B&M, except the placemats which are from Dunelm. The bowl was £3, the large plate was £4, and the smaller plates were £2 each.’

The final few items that Carly found in Dunelm were a pack of three basket-style plant pots with a lining inside for £10.

It was then time to begin the project.

Carly’s partner Peter cut down wood to make some flower beds before building the pergola. The frame came first, with Carly stepping in to assist. Part of the frame was built against the back wall of the house for additional support. Then it was time to add the roof and supporting arches.

To paint the flower beds and barbecue, Carly used Cuprinol anti-slip decking stain paint in the shade Silver Birch from B&M for £29. While she completed this stage, Peter swept down the decking. Then both of them painted the decking in the same shade before painting the main pergola frame in white and setting up a projector against the wall.

Next, Peter built some wooden planters to go around the pergola posts and applied a waterproof cover to create the pergola roof. Carly then got to work on the patio.

‘When we painted the decking area the patio didn’t look right, so I painted it white with masonry paint we already had and got a stencil off Amazon for £15. I then used our grey paint to cover it,’ says Carly.

‘It’s not perfect as I’m not too precious about it, but I do think it makes such a difference. Peter wanted to put a new one down, but with the cost I suggested we see if we can make these look a little better first, so I’m so pleased we did that.’

Peter then constructed the egg chair before the couple placed a number of planters around the area for decoration.

‘The chair came from Studio and I used Top Cashback to get money back just for buying it. We saw one in B&Q that was around £400 but then this one was available with (in my opinion) much nicer cushions for £100 less,’ Carly adds.

The area now features a grey pergola with a projector and rattan seating area, a small white table and baskets with additional cushions and throws.

‘I was really struggling to get any garden furniture but I managed to grab this one from Argos,’ Carly says. ‘ It’s called the Mini Corner Sofa and costs £300.’

The barbecue is grey and white, with various small planters, baskets and wreaths adorning it.

‘Pretty much all of the decor around this area is from Home Bargains for £3 or £4 each, except the drink dispenser which is from B&M for £10. I also got two lavender planters from B&M for £15 each, and a number of small ones for £4 each,’ she says.

Carly picked up some additional bargains to complete the look.

‘I hung a mirror on the wall from Home Bargains for £5.99 and I hung up three sets of white curtains from Amazon for £7.50 each which I love. Then I got some string lights off Amazon for £20 which look gorgeous at nighttime,’ she says.

‘One of the lanterns we got was a bargain from B&M. It was slightly marked so Peter got some money off it – always worth asking! We also got a patio heater from Amazon which wasn’t crazy expensive at £100 and had really good reviews.’

Now the garden is complete, Carly and Peter couldn’t be happier. ‘I’m obsessed with the decking, I love it so much,’ she says.

We just hope we get an invite to one of their outdoor movie nights.

Do you have a story to share? We want to hear from you.

Get in touch: [email protected]

Rachel Brosnahan's Romance With Jason Ralph Started Way Before She Was on Mrs. Maisel