Couple are ‘at breaking point’ and £40,000 out of pocket after rogue builder ‘disappeared’ and left them with a house that’s not safe to live in – and face a further £20,000 bill to redo his work that’s not up to standard

A couple in the midst of renovating their dream family home have been left heartbroken and ‘at breaking point’ after a rogue builder left the property uninhabitable – and them £40,000 out of pocket.

Charlotte Rudolph, 41, from Bath, and her partner Sam Peacock have been living in a social housing rented property for four-and-a-half years and finally purchased their ‘forever home’ – a two-bedroom period terrace – in January this year for £287,500.

Keen to update the 1950s living space to make it more suited to bringing up their children – Ruby, seven, and Dylan, six – the couple enlisted a local builder whom they’d become friends with to help them with the works.

They claim they drew up a contract whereby the builder agreed to do job for a fixed fee of £35,000 – including labour and materials, with them helping out as labourers on site – which later went up to £41,260 to do additional jobs following a loan from Sam’s father. 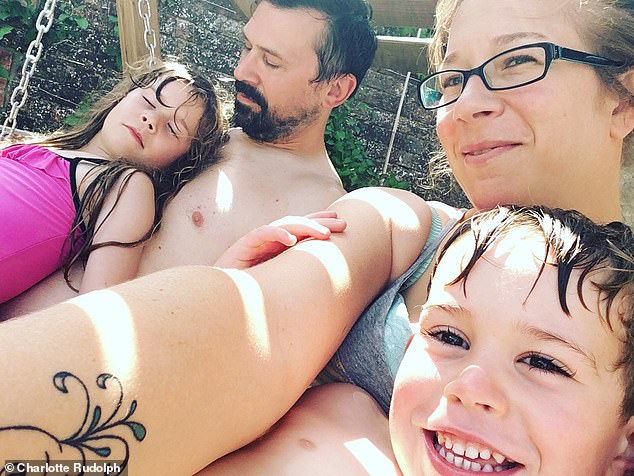 Charlotte Rudolph, 41, from Bath, and her partner Sam Peacock, pictured with their children Ruby and Dylan, have been left heartbroken and ‘at breaking point’ after a rogue builder left their dream family home uninhabitable during renovation works – and them £40,000 out of pocket 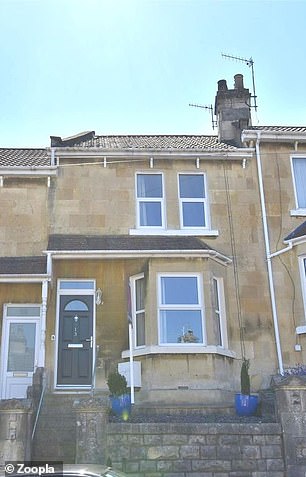 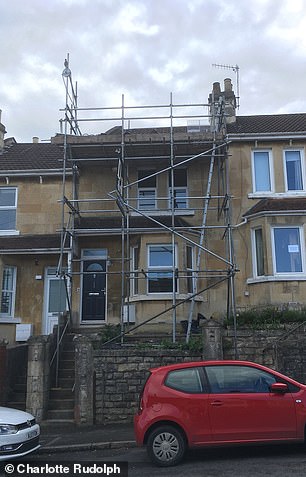 The couple had been living in a social housing rented property for four-and-a-half years and finally purchased their ‘forever home’ – a two-bedroom terrace – in January this year for £287,500. Pictured before left and right now

But in June, Charlotte says the builder began asking for additional money to cover invoices and an increase in costs of materials during lockdown – which they felt was disproportionate.

After seeking advice they refused to pay up, which they claim resulted in the builder ignoring their letters and abandoning the job, removing his tools and some of their materials from the site.

To make matters worse, they’ve since been told much of the work done was inadequate and requires rectifying – meaning they need to find an additional £20,000 – £25,000, which they’re trying to raise via a GoFundMe page, before they have to give up their rented accommodation next month.

Speaking to FEMAIL, Charlotte – who is battling chronic kidney disease – said this has been ‘one of the most stressful emotional rollercoaster times of their lives’. 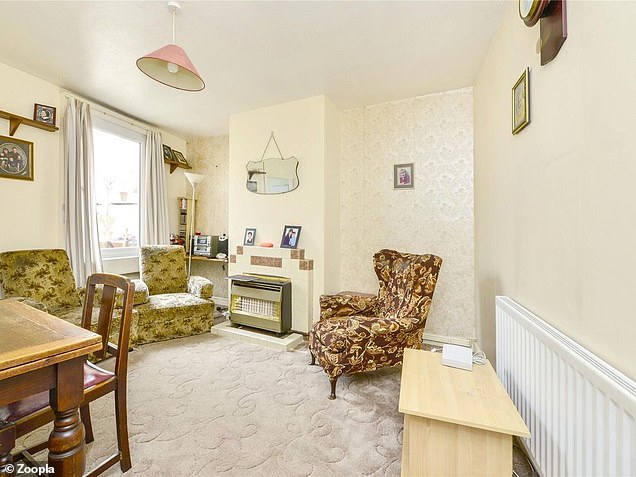 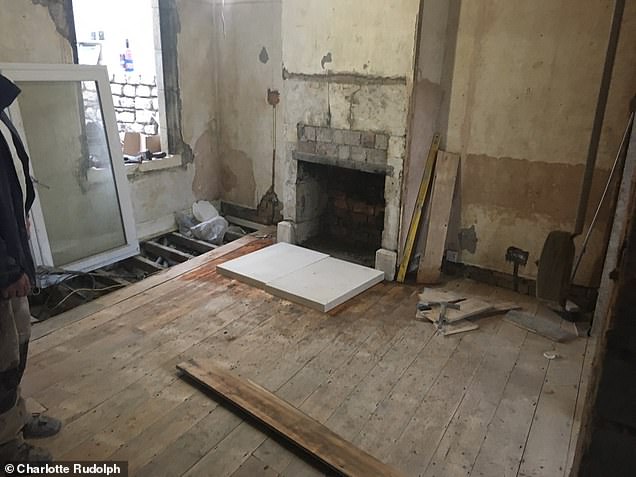 Speaking to FEMAIL, Charlotte – who is battling chronic kidney disease – said this has been ‘one of the most stressful emotional rollercoaster times of their lives’. Pictured: the living area before and during the works 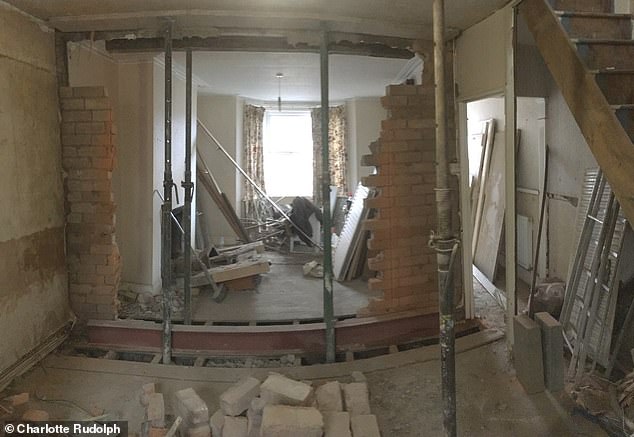 After they refused to pay the builder more money, they claim he abandoned the job and removed his tools and some of their materials from the site (pictured)

‘We are thoroughly ashamed, embarrassed, shocked and hurt. I stupidly trusted this builder, someone who I thought was helping us out, as he knew the troubles we have had with health over the last couple of years,’ she said.

‘We are happy to work our nails to the bone, and use every ounce of energy we have left to get this complete this, we just need a little help to get us over the line.

‘With all the time that the builder has consumed, we are on a very tight deadline as our rent contract deadline is the end of September.’

Charlotte told how the house was meant to be the family’s ‘happy ever after’, after they’ve been plagued by anti-social neighbours at their current rental.

The couple, who were claiming housing benefit, were given 26 weeks to complete renovations after buying their home, which was extended by Bath and North East Somerset council until October. 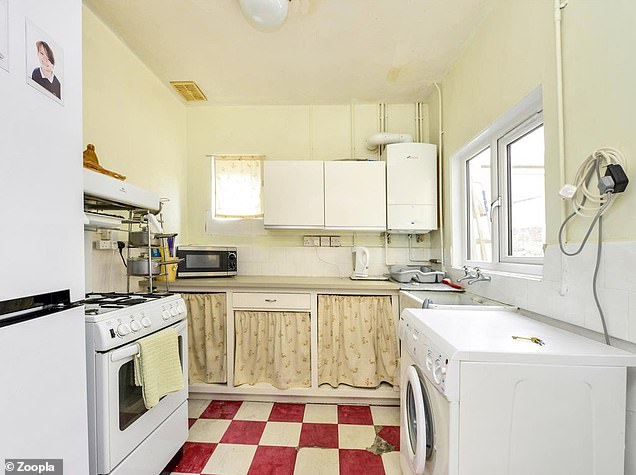 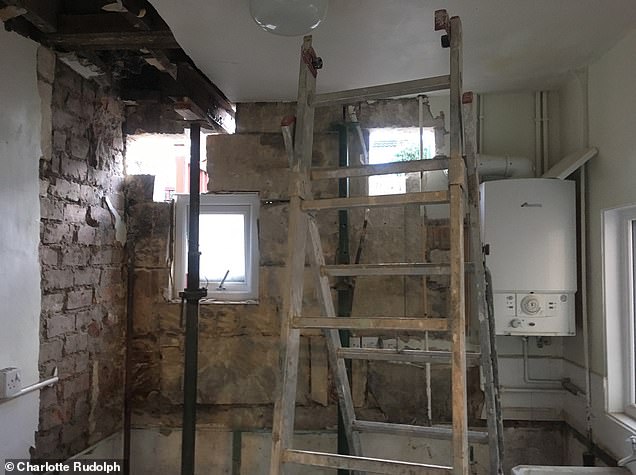 The couple were keen to update the 1950s living space to make it more suited to bringing up their children – but it’s been left in ruins. Pictured: the kitchen before and now 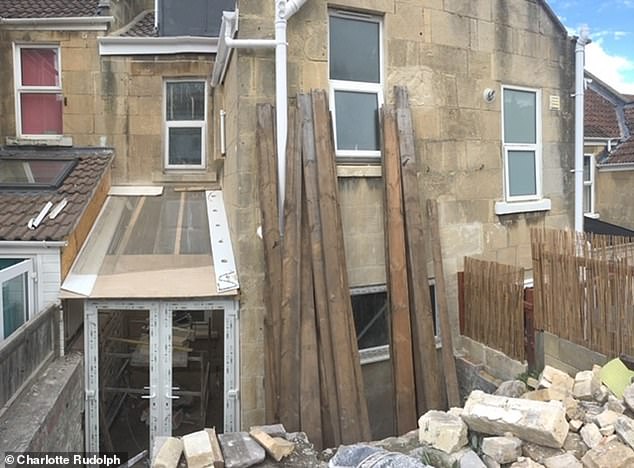 Due to some work not being done properly, the couple cannot use the French doors that they bought and partially fitted (pictured) to also allow for the changes required

‘The property had not been touched or modernised since the 1950s – this is the only way we could afford to own a house with our budget,’ Charlotte explained.

‘It needed a new roof, a full rewire, some structural work and an overall head-to-toe makeover.

‘The builder came to review the property before we put an offer in to make sure we could afford the works with our budget. We checked out his rating and reviews on mybuilder.com. At the time he had 100 per cent feedback. It then dropped to 86 per cent after we hired him.

‘When our issues came to light, we reported our findings to Mybuilder, who have subsequently removed his account from their site.

‘The property is still uninhabitable – it has no electricity, bathroom, kitchen or finished bedrooms and hallways.’

The couple said working alongside the builder six days a week was ‘exhausting but exhilarating’ until his attitude began to change. 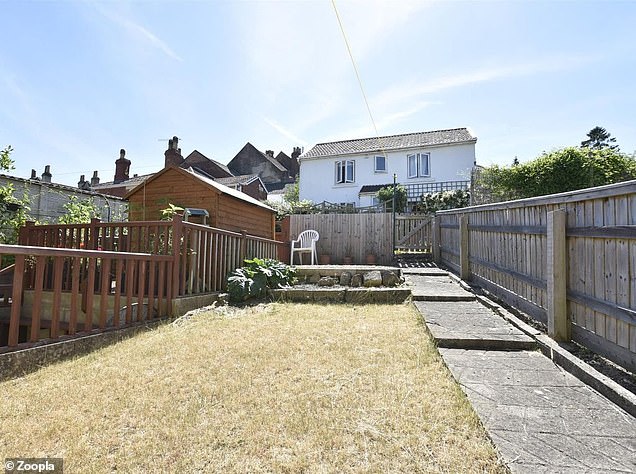 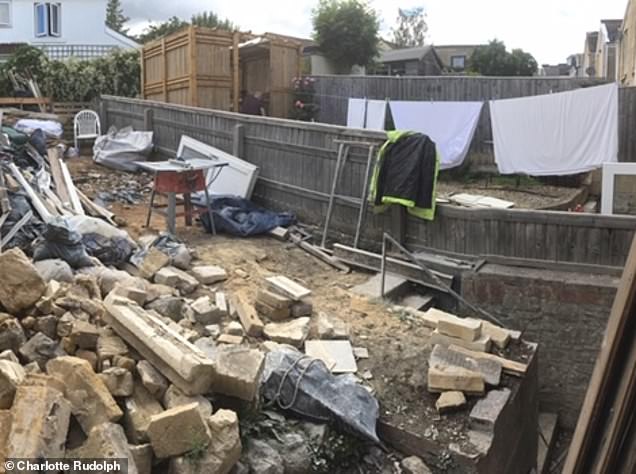 The couple said they will have to shell out an extra £20,000-£25,000 to complete the works, and will need a skip to remove the debris left behind (pictured right in the garden) 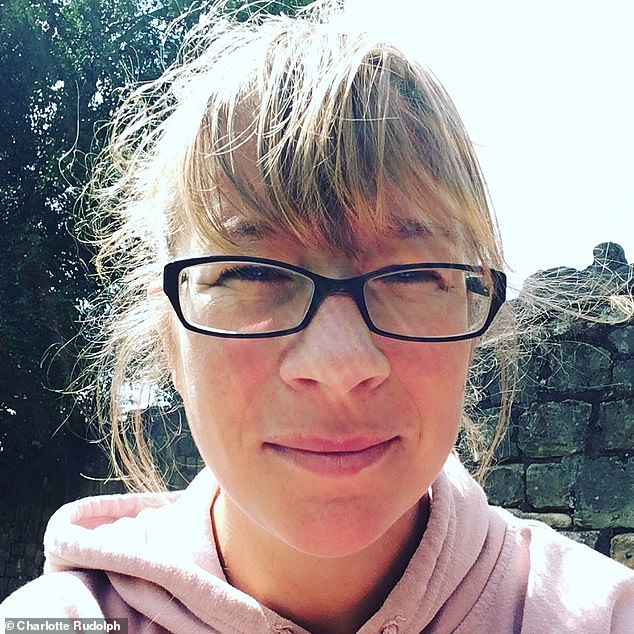 Charlotte told how the house was meant to be the family’s ‘happy ever after’, after they’ve been plagued by anti-social neighbours at their current rental

As well as becoming ‘verbally rude’, careless with their materials, disappearing from site and appearing to cut corners, Charlotte claimed he started asking for more cash.

‘There were a couple of incidents where he asked for an extra bit of money here and there, but as it was nominal I didn’t put two and two together,’ Charlotte said.

‘On June 27 he sent an invoice for the electrician, asking us to settle it. This, however, was on the agreed works, and was subcontracted out; it essentially was the builder’s responsibility, which he was trying to shift responsibility for.

‘On July 9 he asked for an additional £1,200 to finish off the conservatory roof, stating that because of Covid-19, the cost of materials had gone up.

‘I rang some glaziers and they said the price of glass had maybe gone up by two or three per cent, if at all, not the 150 per cent he was charging. 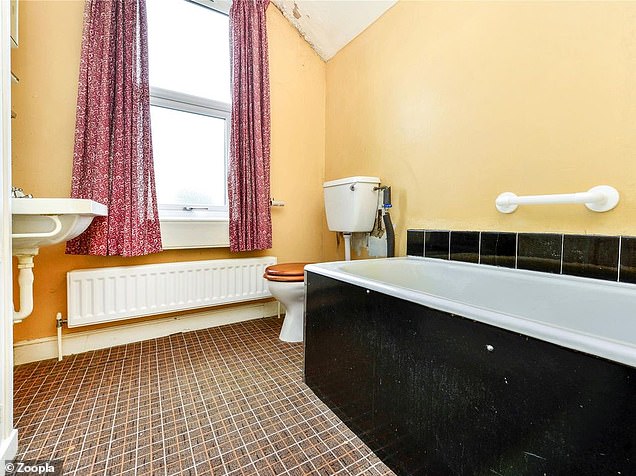 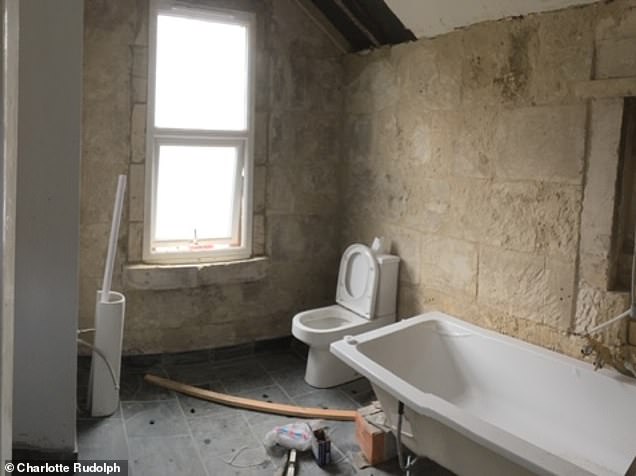 The property is still uninhabitable – it has no electricity, bathroom (pictured before and now), kitchen or finished bedrooms and hallways 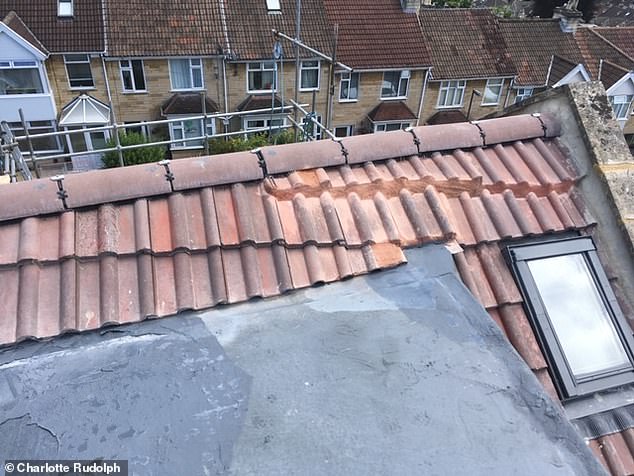 Charlotte said the tile work on the roof was ‘shambolic’, with tiles stacking up around windows and the ridge. ‘Where titles didn’t match up properly, big gaps were formed, simply being filled with red mortar,’ she added

‘We also rang other trade merchants who confirmed that none of the materials we had used, or that we still required, were affected by any changes in price.

‘The next day my partner wanted to discuss with him about any other costs that were meant to be already covered, or were still needing to be covered. They did an itinerary of jobs and works left and the money now needed to finish rose to £5,000.’

Confused by how the project had suddenly ran out of money, the couple contacted Citizen’s Advice and sent a letter to their builder asking him to itemise the outstanding works – but had no response.

‘Following receipt of this letter, he drove up to the site and started removing his tools,’ Charlotte said.

‘We have just had building control in on July 21, and to add to our woes some of the work he has done will have to be re-done, like the roof, and the configuration of the stairs does not meet fire regulations. 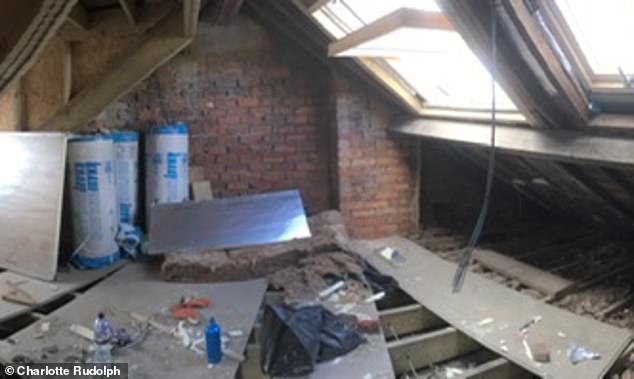 The roof will need to be redone, as will the configuration of the stairs into the loft space (pictured) which do not meet fire regulations

‘Some walls now need to be removed and others put back up. We also cannot use the French doors that we bought and partially fitted to also allow for the changes required.

‘The tile work was shambolic, with tiles stacking up around windows and the ridge. Where titles didn’t match up properly, big gaps were formed, simply being filled with red mortar.

‘The agreed plaster work has not been started; a few bad messy attempts have been made to make it look as though work has started. The quote we have had to rectify this is around £4,000.

‘Through a very kind offer of a mum at our kids school, I spoke to a lawyer for advice this morning, and although we have an extremely strong case it’s unlikely that we will see our money, for the unfinished work or the work that has to be re-done.’ 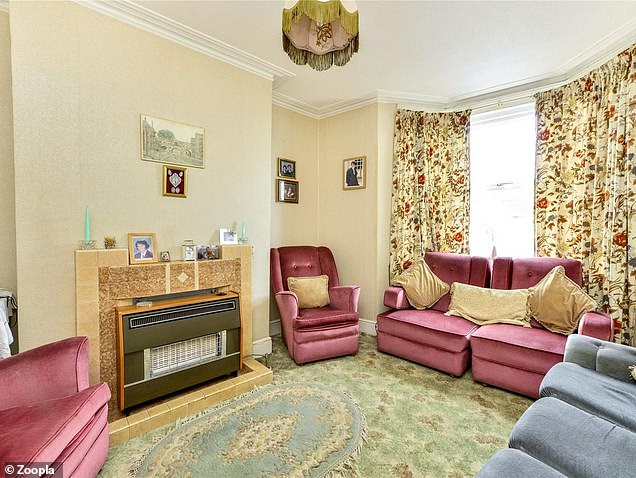 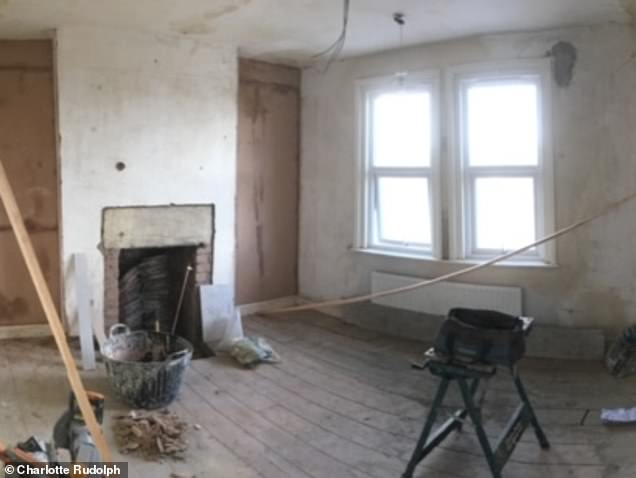 Charlotte said the agreed plaster work has not been started, adding: ‘A few bad messy attempts have been made to make it look as though work has started. The quote we have had to rectify this is around £4,000.’ Pictured: a sitting room before and now

In total, Charlotte said they have paid out £40,508 to the builder in installments, but the house is nowhere near finished.

‘When we knew what was unfolding, I felt winded, sicken, heartbroken and completely disillusioned, like we had nowhere to turn,’ she recalled.

‘Our effort to buy the house and do the work needed – borrowing from multiple people – had taken a lot out of us, but felt worth it. But to then be handed a very different reality just broke us.

‘We have seriously looked at selling the property in its current state and taking the hit, just to find a conclusion to the situation.’

Since sharing their story on GoFundMe, Charlotte said they’ve been ‘humbled’ that a number of tradespeople have offered to help and advise them for free. 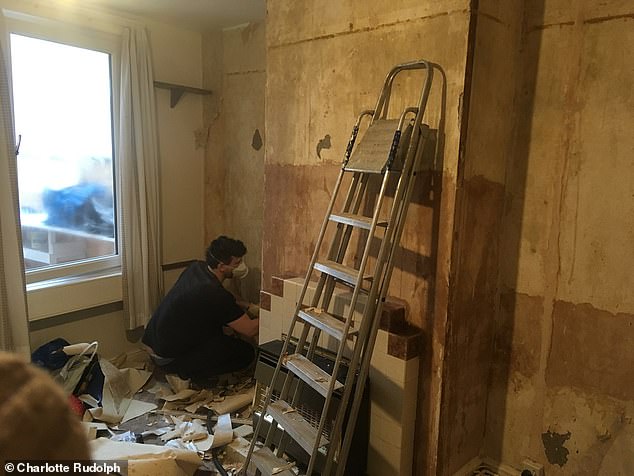 Since sharing their story on GoFundMe, Charlotte said they’ve been ‘humbled’ that a number of tradespeople have offered to help and advise them for free. Pictured: Sam helping with the renovations in the living area

‘However, and completely understandably, we would have to provide materials to re-do the roof including the lead flashings that disappeared from site, timber for the stud walls, loft insulation, wood treatment course, gas safety check, paint, banisters and spindles, a skip to remove all of the rubbish left behind – the list goes on,’ she said.

‘The work remaining work – materials and labour – is probably about £25,000 to £30,000. This comprises of remedial work and all outstanding work from the original agreed works lists.

‘We have so far had quotes for the plaster and roof materials, and it’s an eye-watering £8,000 for just these two areas. The electrician bill as well as the structural engineer bills are outstanding – a contract between the builder and these trades.

‘We are dumbfounded with the generous offers of help, so anything contributed will be amazing. We know this is a tough and bizarre time, so can’t thank people enough.

‘I feel a bit ashamed that I find myself cap in hand; I’ve always considered myself proud. But my family are more important than my dignity. We just want a home for our family.

‘Any surplus funds we would like to donate to people in a similar situation. This is not something we would wish on anyone.’

Solicitor who joked about novichok during interview didn't get the job

How LeBron James' Children, Bronny, Bryce, and Zhuri, Are Winning at Social Media

Aldi Specialbuys: Get ready for summer with garden furniture and outdoor toys from £5.99