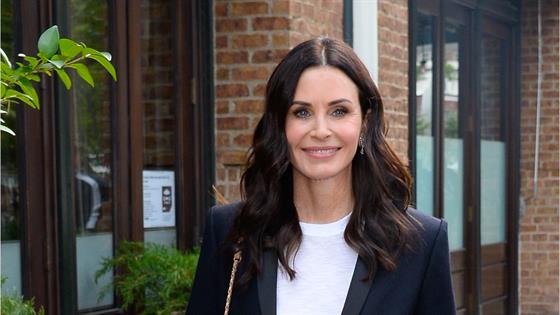 Just remember, “I’ll be there for you.”

Courteney Cox proved this to be true once again by giving one Friends superfan the ultimate surprise on Monday’s at-home edition of The Late Late Show.

The fan—13-year-old Naftali of Borehamwood, England—was recently scheduled to have his bar mitzvah. The teen was hoping to celebrate the major milestone with a Friends-themed party, complete with tables named after the characters, a Joey and Chandler-inspired foosball table and a red sofa for photo opportunities. Even his invitations featured the famous Friends font.

Unfortunately, Naftali had to cancel the party due to social distancing and the global coronavirus pandemic. He then had a virtual bar mitzvah with his family members and rabbi. In fact, the rabbi, Rabbi Alex Chapper, claimed it was the “first-ever online bar mitzvah.” He even referenced the sitcom during the ceremony.

The footage from the virtual bar mitzvah quickly went viral.

“I had no idea,” Naftali said when asked whether he expected to have millions of people watch his bar mitzvah. “I thought it was going to be a small thing, my family and just a few friends, but it turned out to be so big.”

After hearing the story, Cox decided to pop in virtually and say hello. Needless to say, Naftali was pretty surprised to see the Monica Geller star appear on his screen.

But that’s not all. Cox also gifted him a foosball table and performed one of her character’s classic “I know” lines. She seemed pretty impressed with his dedication to the show, too. Naftali said he’s watched the entire series seven times.

At one point, James Corden pointed out Friends ended years before Naftali was born and asked him why he loved it so much.

“You can relate to all the characters,” he replied, “and it’s really funny.”

Watch the video to see the sweet surprise.