Deck the halls with Yuletide crafting: Stationery mogul Sara Davies, fresh from her turn on Strictly, shows you how

Her desire to take part in Strictly Come Dancing was no secret, but little did Sara Davies know how overwhelming and emotional it would become.

Neither did she imagine the support from women up and down the country who admired her for ‘having a go’ and not being afraid to jiggle her wobbly bits alongside those slender and supple professional dancers.

Watching a 37-year-old working mum of two boys (Oliver, seven, and Charlie, five) shake her stuff bought her an army of fans in awe of her 5am starts. People left messages of support on social media sites and women of all ages wrote letters of encouragement.

‘I’ve never lost the mum tum. Those first few weeks I had so many corsets on and then Spanx,’ the businesswoman and Dragon (from Dragons’ Den) tells me from her office in Darlington, County Durham. Not that things started well when Sara made the mistake of adopting her usual business approach. 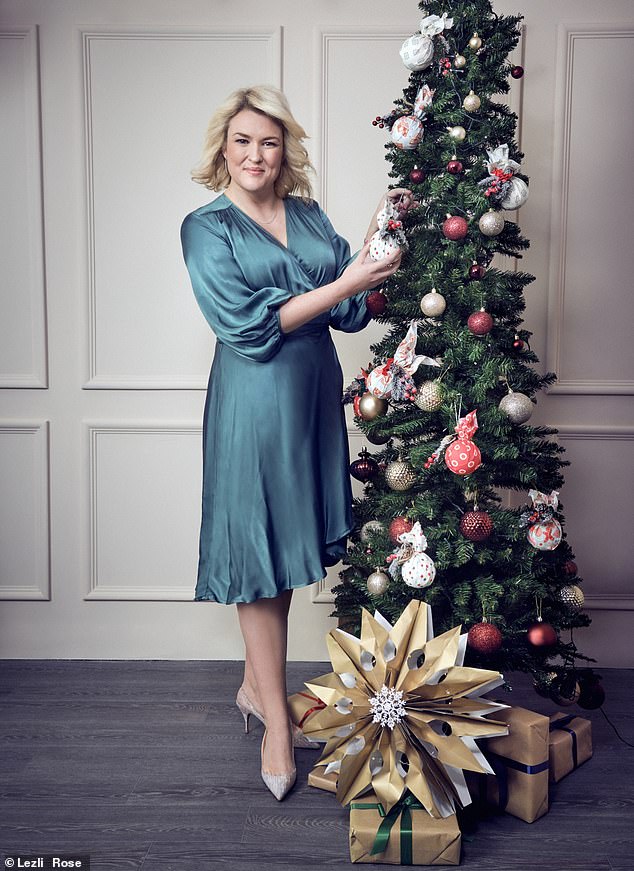 Sara Davies (pictured), who runs Crafter’s Companion from her office in Darlington, County Durham, has filled her home with DIY decorations

She reveals: ‘I thought if I worked really hard, the better I’d get. But I had a rude awakening that first week. I was right at the bottom of the leaderboard. I had done a good job of my cha cha cha — but hadn’t allowed myself to lose the inhibitions. I realised I’d be first out if I didn’t let myself be more vulnerable. I went on a big journey of self-discovery those first few weeks.’

It was in week four that Sara topped the leaderboard with her passionate tango. ‘That show changed me so much. How I see myself, how other people see me. It’s changed me physically, too. No, I haven’t lost any weight, but I’m toned and my stamina levels are great.’

While her Strictly journey ended in week eight, her friendship with dance partner Aljaz Skorjanec is still strong.

And there’s no need for Sara’s husband of 14 years Simon, 42, to feel any jealousy, as he’s become great mates with Aljaz, too.

It was to her husband (whom she started dating while still at school) that she dedicated her ‘couple’s choice’ dance, as a thank you for allowing her to shine on Strictly and flourish in business by sacrificing his career as a management accountant.

Today, he helps Sara run Crafter’s Companion, her business empire that’s now worth around £37 million, meaning they live and work together.

Sara’s business was built off the back of her genius invention, The Enveloper, a clever gadget that makes envelopes from any piece of paper or card. But don’t she and her husband drive each other mad? Well, they have insisted their offices are at opposite ends of their headquarters in Darlington. And he laid down some ground rules.

‘The deal was that I wouldn’t micro-manage him,’ says Sara. ‘The whole point was for him to free up my time so I could do the creative stuff. I would be a control freak with anyone else but if I did that with him, he’d quit. So, I’ve been forced to take that step back.’ 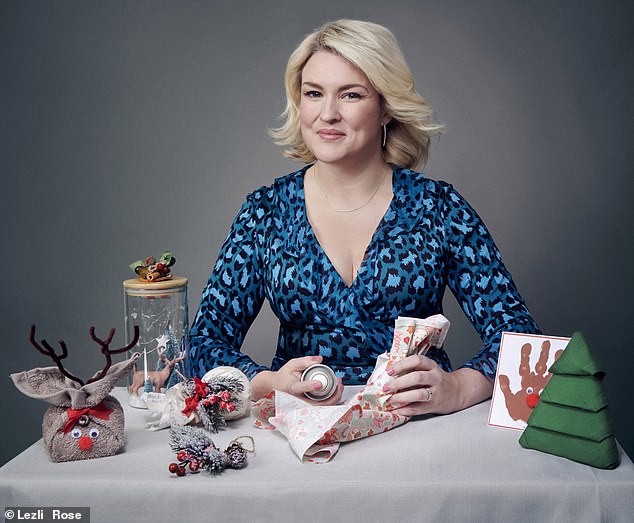 Naturally, as the crafting queen, her home will be filled with DIY decorations, like the ones she’s made for Inspire readers. She is adamant the biggest misconception about craft is that any sort of artistic flare is required.

‘I can’t draw or paint. Most women have some form of craft hobby. If you have that little bit of creative streak then you’ll turn your hand to all sorts of things — baking, knitting, sewing, embroidery. Once you start, the feel-good factor will make you do more.’

Little wonder that during lockdown crafting boomed, with people desperate to find new ways to unwind. Not that Sara has much time to relax: a new series of Dragons’ Den starts in January and she’s just finished her autobiography. But will she continue to ballroom dance? She’s not sure.

‘I was taught by one of the best dancers. I could find a teacher, but it would be like driving a Ferrari and switching to a VW Polo.’ 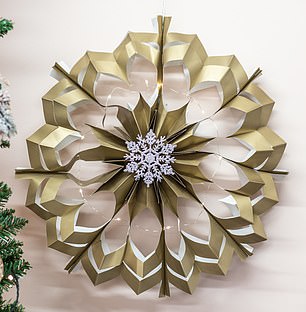 1. Put the paper bags on top of each other and cut a design into them.

2. Using the glue gun, run a line of adhesive across the base of each bag and one along the centre so it forms a T shape.

3. Glue the bags on top of one another.

4. Fan the bags out and glue the first and last one together so that they create a complete circle shape.

5. Use the needle and thread to sew a shiny snowflake through the centre. 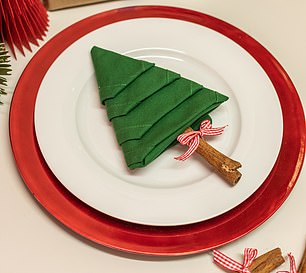 1. Fold the napkin in half so it forms a rectangle. Fold it in half again to make a square, making sure corners are aligned and there are no wrinkles.

2. Turn it towards you to form a diamond with the unfolded corner in front of you.

4. Slide a hand under the napkin, sandwich it between your hands and flip over.

5. Fold both of the outer corners all the way to the opposite side. You should have one on top of the other. Flip napkin again.

6. Fold the layers up again. After the first layer, tuck the remaining corners under the pocket created by the previous one.

7. Use a cinnamon stick for the tree trunk. 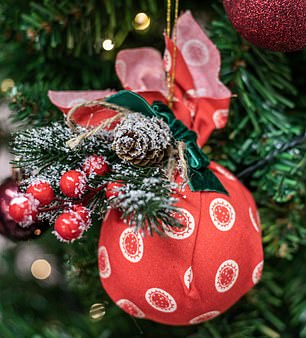 1. Cut the fabric into a square, large enough for it to cover the ball, and leave a little extra for the top.

2. Wrap the material around the ball and gather up at the top.

3. Tie ribbon around where the material has been gathered, leaving enough to create a loop.

4. Position foliage and tie in place with a bow, using more ribbon. 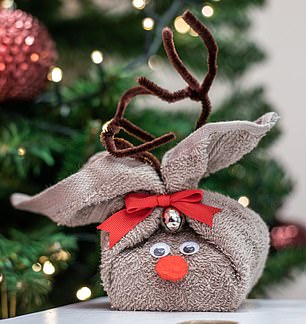 1. Open the face cloth with a corner in front of you so it’s a diamond shape.

2. Place the soap in the centre.

3. Pick up the corner in front of you and the opposite corner and hold together at the top, then roll them down towards the soap.

4. Take each end and hold in centre. Wrap elastic band around to secure.

5. Fold the ears down. To make antlers, bend a pipe cleaner in half, cut up another and twist small sections of it to the ends of the first.

6. Thread bell on to ribbon, then tie over the wrapped elastic band. Stick on a pompom nose and googly eyes.

'RHOC': Shannon Beador Said Tamra Judge and Vicki Gunvalson Shared a Lot of 'Untruths' About Her

The untold truth of Cam

We should be counting years of life lost or saved

The Queen 'is not a foodie' and follows a no-carb diet when eating on her own, former chef reveals