Expanding the GST and overhauling property taxes are two of the most important reforms Australia should embrace after the coronavirus recession, the International Monetary Fund says, warning the pandemic will leave enduring economic scars.

In a report that backs the Morrison government’s plans to reform the nation’s bankruptcy laws, the IMF argues Australia also has to boost childcare spending or look at other ways to make it easier for women to work in the post-virus environment. 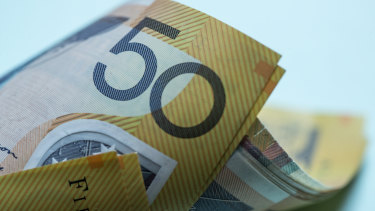 The IMF says Australia will have to revisit tax reform, particularly around the GST, once the coronavirus recession comes to an end.Credit:Louie Douvis

The paper, compiled for the governments of the world's 20 largest economies, which includes the United States, China, Brazil and Australia, is a blueprint for nations to rebuild following the largest economic downturn since the Great Depression.

While most nations are expected to show a lift in economic growth in the recently completed September quarter, the re-emergence of coronavirus cases in many northern hemisphere nations has prompted fears of a double-dip global downturn.

The IMF said much hinged on the emergence of a vaccine to end the spread of the virus. Once that occurred, it would be a long haul to full recovery.

"The recovery is likely to be partial and uneven, with some sectors and countries picking up faster than others," it said. "The wounds inflicted by the pandemic are likely leaving deep scars, compounding underlying challenges. While there are tentative signs that the worst is over, uncertainty remains high as infections continue to spread."

The fund maps out particular policy areas individual nations should focus upon.

In the case of Australia, it ranks tax structure reform by increasing the share of consumption and property taxes in total tax revenue as the nation's most pressing reform agenda.

The Morrison government brought forward its second stage of personal income tax cuts in last month's budget but has shown no interest in broadening or increasing the GST. The NSW government has pressed for GST reform as well as reforming stamp duties but has found little appetite for such changes among other states and territories.

Outside of tax reform, the IMF says Australia should boost childcare spending or engage in other measures to boost female participation in the workforce.

The IMF makes special mention of the Morrison government's JobKeeper wage subsidy program as one that has helped the economy. It also believes bankruptcy reform, which the government is introducing, will be important for the post-virus recovery.

But the fund acknowledges most nations are likely to see a sharp lift in bankruptcies and structural unemployment, with many jobs and industries wiped out by the pandemic.

"While much is still to be learned about the post-pandemic world, the transition could entail a wave of bankruptcies and a reallocation of resources between sectors, with the skills needed for the expanding activities possibly different than those possessed by the jobless," it found.

Get our Coronavirus Update newsletter for the day’s crucial developments at a glance, the numbers you need to know and what our readers are saying. Sign up to The Sydney Morning Herald’s newsletter here and The Age’s here.

If You're Always Sweating At Night, One Of These Hormonal Conditions Could Be To Blame

One Direction reunion: Liam Payne opens up on when band will get back together

Two-thirds of Western Europeans would consider augmenting their bodies

My girlfriend of 2 years has never had sex, but I want to. How can I get her on board without pressuring her?

Why Starbucks is the hottest designer brand in a coronavirus world