Derek Jeter took a slight jab at the lone baseball writer who failed to vote for him to get into the Hall of Fame unanimously during his speech at the induction ceremony on Wednesday afternoon.

Jeter started his induction ceremony speech by telling the audience he was struggling to write what he wanted to say until he told himself to “write just how you feel.” He still appeared to be perturbed over receiving 99.7% of the vote from writers in 2020. 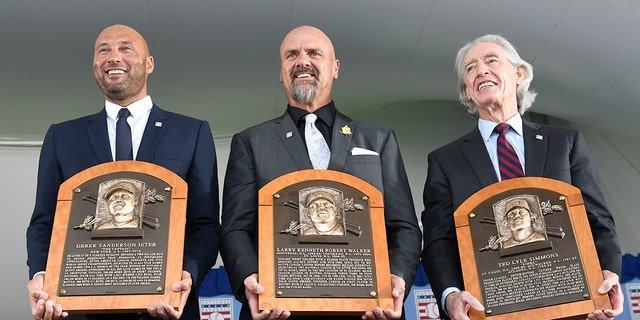 “There was only one thing in my life I wanted to be … and that was shortstop for the New York Yankees,” he said. “Now, I’m a Yankee forever. Without question, you helped me get here today as much as any individual who I’ve mentioned. You can’t be fooled. You’re passionate, you’re loyal, knowledgeable, vocal, challenging and supporting.

“There’s a huge responsibility that comes with wearing a Yankee uniform. Just ‘cus you have it on doesn’t guarantee you anything. You have to earn it. You demanded I earn it every single day whether it was during the season or in the offseason. I felt as though I was representing you and I was representing all of New York. I did that in the best possible way I knew how and I wanted to prove to you I belonged. You kept pushing me to prove it over and over again. I was always most comfortable on the field, especially at Yankee Stadium playing in front of you, and I wanted you to be able to count on me. To this day, especially right now in this moment, I still represent you. And it’s been one of the greatest honors of my life.”

First Dates Hotel location: Where is it filmed and can I stay there? – The Sun