England qualified for the Women’s T20 World Cup semi-finals as they knocked out the West Indies with a 46-run win in Sydney.

SCORECARD | AS IT HAPPENED

On a testing, turning pitch, Nat Sciver’s (57 off 56 balls) third half century in four games in the tournament lifted England up to a score of 143-5.

Hayley Matthews and Stafanie Taylor – the West Indies match-winners in the 2016 final against Australia – put on 29 for the second wicket before the latter had to retire hurt for 15 with what appeared to be a groin injury.

It would prove to be the turning point of the match as England’s trio of spinners then tormented their opponents, with slow-left-armer Sophie Ecclestone taking 3-7, legspinner Sarah Glenn 2-16 and offspinner Mady Villiers – making her World Cup debut, in for Lauren Winfield – claiming 1-30 as the West Indies fell well short on 97-9.

England’s game-plan had been disturbed early on as, after winning the toss and opting to bat first, Tammy Beaumont – promoted up to open after a tournament-long debate – was dismissed for a duck, lbw to Shakera Selman (1-23).

Selman would have a say in a couple more England dismissals, a brilliant diving catch at long-on doing for Danni Wyatt (29 off 27) and a direct hit seeing the back of skipper Heather Knight (17 off 14) after some lazy running.

The running between the wickets had otherwise been sharp during the innings, the strike being regularly rotated and ones turned into twos and, anchored by Sciver’s eighth T20I fifty, England had a platform from which to attack in the final few overs of the innings. 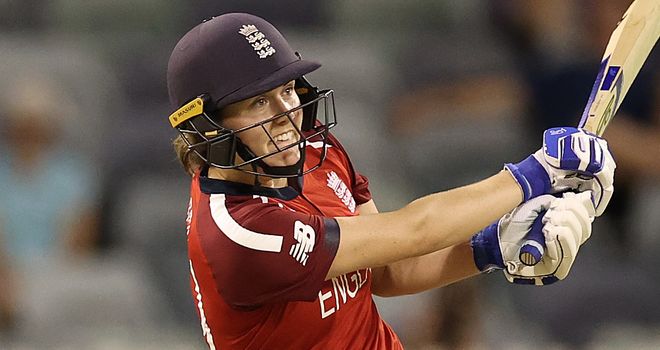 Nat Sciver struck six boundaries in her 57 from 56 balls, her third fifty of the World Cup

Amy Jones (23no of 13), relishing her new role down the order, cracked three fours and Katherine Brunt (10no of 4) finished the innings off with back-to-back boundaries as 36 runs came off the final three overs.

Chasing the highest score in the three World Cup games played at the Sydney Showground, West Indies reacted by promoting big-hitting Deandra Dottin up the order.

But the brilliant Ecclestone accounted for Dottin – caught at midwicket – for nine in the third over and, in search of big hits to the boundary, the West Indies were steadily accumulating dot balls, failing to rotate the strike in the way England had so successfully earlier. 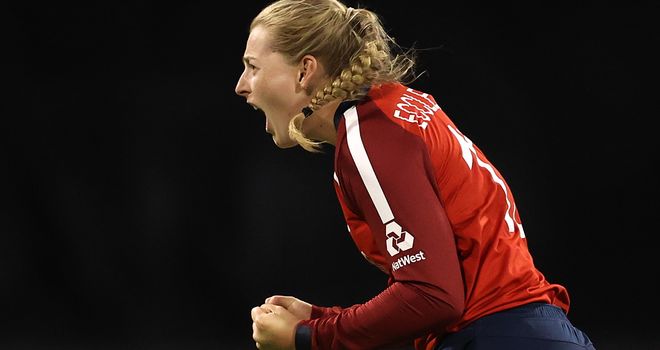 Sophie Ecclestone was the pick of the England bowlers, taking 3-7 in just 19 deliveries

Matthews and Taylor briefly rallied the innings with a flurry of boundaries towards the back-end of the six-over powerplay, but then Taylor went down injured in the eighth over and Glenn bowled Matthews (10) early in the ninth to all but end the contest.

Villiers claimed her first World Cup wicket in her very first over, taking a brilliant return catch off her own bowling to see off Shemaine Campbelle (1), while Glenn added Chedean Nation for a duck soon after.

Lee-Ann Kirby (20 off 15) struck some lusty blows lower down the order, though was dropped twice on 11 and 13, by Sciver and Brunt respectively, denying Glenn and Villiers from adding to their personal wicket tallies.

Anya Shrubsole (1-13) returned to finally see the back of Kirby, holing out to deep midwicket where, this time, Sciver would make no mistake.

Thereafter, the West Indies wilted to a heavy defeat as Ecclestone claimed a couple more interspersed with some embarrassing run outs. 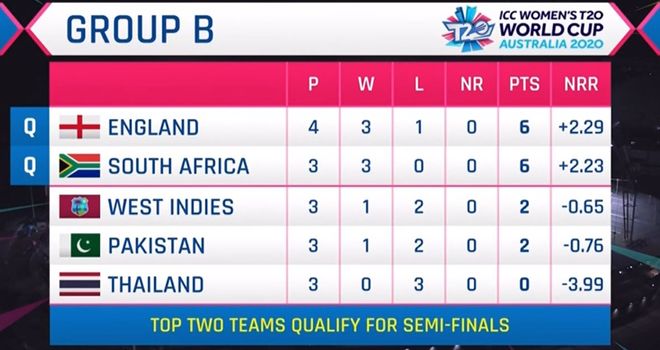 Confirmation that England qualify for the semi-finals from Group B, along with South Africa

Elsewhere, South Africa too qualified for the semi-finals, with a game to spare, as they beat Pakistan by 17 runs in Sunday’s other game from Group B. SCORECARD

After winning the toss and electing to bat first, South Africa stuttered their way somewhat to 64-4 in the 13th over, until Laura Wolvaardt took charge and smashed eight boundaries in an unbeaten 53 from 36 balls to set Pakistan a stiff target of 137.

Captain Javeria Khan (31) played nicely at the top of the order and Aliya Riaz (39no) too but, as has been the case at times during the tournament, Pakistan just lacked that little bit of firepower with the bat to reel in South Africa’s score and they ultimately pulled up short on 119-5.

Live coverage of the 2020 ICC Women’s T20 World Cup continues on Sky Sports, with Australia taking on New Zealand in a semi-final knockout clash from 3.30am on Monday.

How to make your dreams a reality with vision boards

This 68-Year-Old Just Gave Birth to Twins, Is a Rock Star