Keen to get into the mood for an interview with a journalist from Britain (albeit an Aussie one), Foo Fighters drummer Taylor Hawkins is preparing a tea and a Digestive. It’s all very refined. That is until he compares finally being able to release the latest album from the band, Medicine at Midnight, as being free of a painful bout of constipation.

We figure starting our chat with one of those ‘rapport-building’ questions where, try as you might, the subject is more than likely going to say the same thing they’ve told the 40 other journalists that morning, is a safe way to test the mood.

For Taylor, though, apparently, when asked how it feels to finally be able to unleash the iconic group’s 10th studio album nearly a year after having to put it on pause due to the coronavirus pandemic (what else?), this answer is all ours.

‘Like taking a big huge sh*t,’ he laughs from his home in California. ‘My stomach’s been hurting for a long time. Finally! A collective sigh of relief, we’ve finally got over our constipation.’

Today the band have released their latest, and their first LP since 2017, which would have gone hand in hand with a world tour – which would have, also, coincided with the 25th anniversary of the group’s first ever tour.

Then ‘rona hit, flipped the table, sent everyone home and delayed all plans. 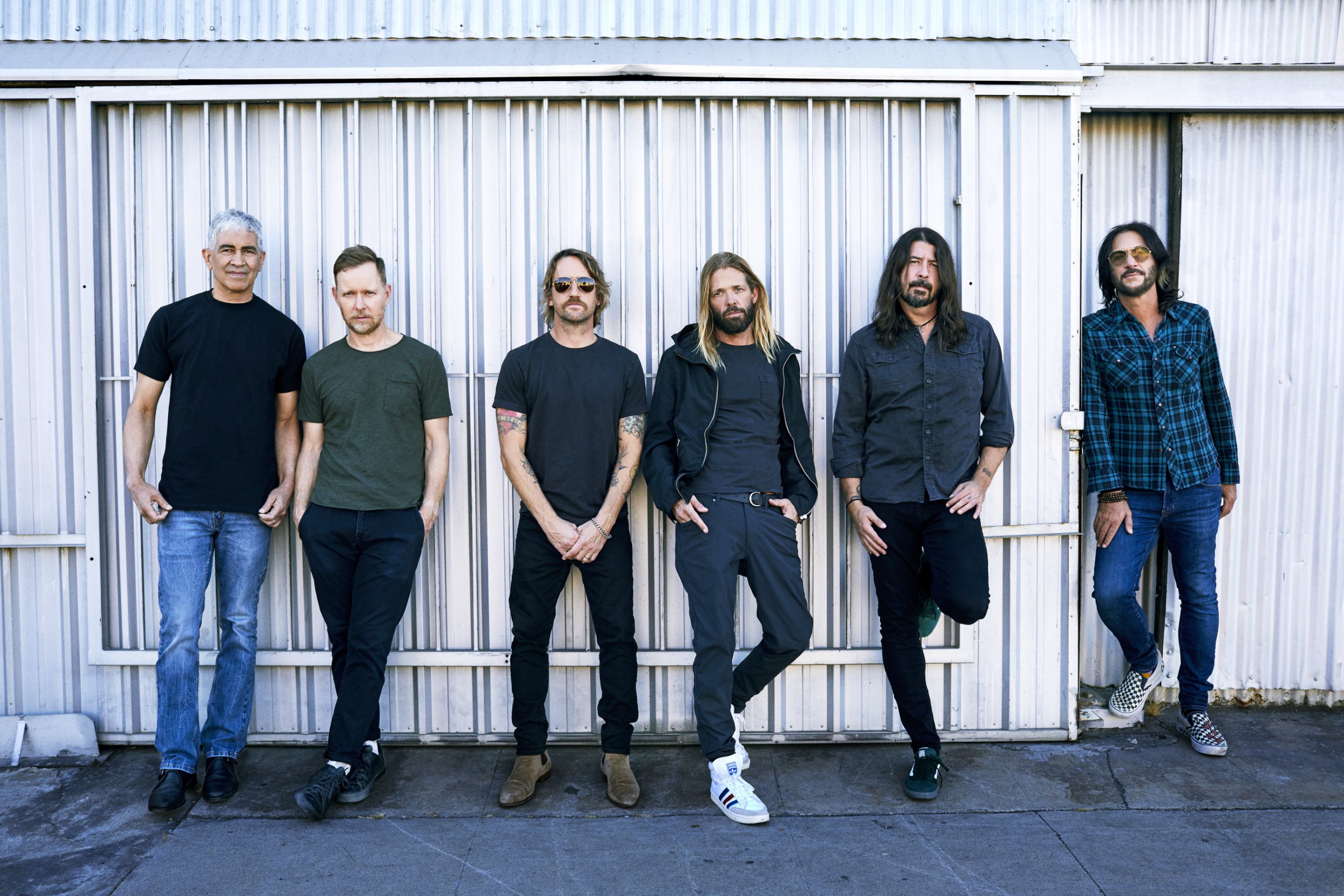 The band’s frontman, face, leader, what have you, Dave Grohl, released a statement in March last year – one of the best of the cancellation statements, we may suggest – insisting once it was safe to get back out on the road the group would.

For a band – who also counts Nate Mendel, Chris Shiflett, Pat Smear, and Rami Jaffee as members – that is known for getting on that tour bus and playing two-hour-minimum shows around the world for a few years, before punching out another album and doing it all again, Taylor, 48, admits not doing that feels ‘totally foreign’ to him, but follows it up with a sympathetic, ‘just how everything feels totally weird for everyone in the world right now.’

He goes on: ‘It’s so hard for me to whinge right now at all. We’re so blessed, we’re so lucky. It’s just a f**king record, really, there is so much more important sh*t happening.

‘Yeah it sucks, we normally go on tour make lots of f**king money, and sell records and do our usual deal, and we can’t do it this time because it’s unsafe and impossible.’

Taylor adds when it does become ‘safe and possible’ they’ll go back out there, but right now he – and no one else – knows when or how that will be.

One thing the sticksman, who joined the band in 1997, knows is that music is as important as ever.

‘It means everything to me and I know it does to a lot of people out there,’ he says. ‘If I was 17 or 18 years old right now I’d be losing my sh*t because I can’t go to a concert.’

Be that as it may, he goes on to add that the pandemic has meant he’s been able to take his foot off the accelerator for the first time in decades, adding: ‘It’s been a nice time to kind of get off the treadmill, on a certain level. I’m not saying that sounds unsympathetic because I know the world’s in a lot of trouble, it’s terrible, I know this.

‘I’m just so fortunate and I feel fortunate the time this has given me. I haven’t really got off the treadmill in 28 years. You never really get a chance to look; you get little moments of “oh my life’s amazing”, but you’re usually onto the next record, or gig or side project, you’re constantly go go go, and when you’re not you get to reflect, if you’re lucky, which I’m lucky.

‘I just want this place to heal and people to go be human beings again. We’ve been getting together a lot more, safely, and testing so it feels like…the only difference is we rehearse and do TV shows, so we’ve managed to somehow, in some strange way, be a band still.’

The group has been drip-feeding singles from their latest album over the past couple months, including Shame Shame and No Son Of Mine – the third, Waiting On A War, Taylor dubbed ‘one of the best’ songs Dave has ever written – and last month they got to perform their classic feels tune Times Like These for President Joe Biden’s Inauguration, as we saw the last of, in Taylor’s words, ‘the f**king pumpkin president with a bad hairdo’ in the White House.

As the album drops today there’s the usual anticipation that comes with the fan reaction, especially seeing as Dave himself described Medicine At Midnight as the group’s ‘boogie’ record.

Taylor maintains early critiques have been ‘pretty damn good’, but he’s aware the old school fans might take a little longer to come around.

‘I was really unsure when we put out Shame, I did not know if people were…’ he says, before trailing off and asking: ‘What did you think the first time you heard it, and be f**king honest.’

After we dissect that answer, Taylor goes on to liken the release of Medicine At Midnight to that of Queen’s The Game and Hot Space.

‘The Queen fans who liked Queen I and Queen II were probably not that into Another One Bites The Dust, you know what I mean?’ he says. ‘The only way that I can quantify in my head is I use the Queen method: “What would Queen do?”‘

Taylor explains: ‘To me and Pat, [this album is] either gonna be The Game, which was their big breakout, 80s record that had a dance feel to it, which had Another One Bites The Dust, or is going to be our Hot Space, which completely f**king tanked.

Medicine At Midnight is out today.