Lyon Opera Ballet is the headline dance event at the 2020 Adelaide Festival with its Three Grand Fugues. But it turns out to be competing with a scene-stealer in which there is dance without dancers, theatre and film all mixed up in a totally engrossing bundle. 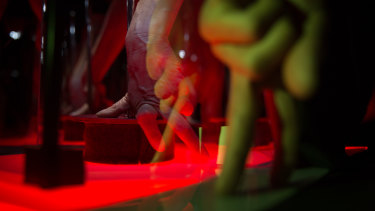 In Cold Blood The “dancers” are three pairs of hands.Credit:Julien Lambert

This surprising melding of artforms is titled Cold Blood. Its creators are dancer Michele Anne De Mey and film director Jaco Van Dormael, both Belgian. Their “dancers” are three pairs of hands whose forefingers and third fingers dance their way onto a large screen in front of an audience that views both the filmed performance and, below that, the real-time making of it with miniature sets of cities, rooms, theatre stages, fields and forests. The choreography is as much in the moving of props and cameras as the dancing fingers.

It’s hard to convey in words or still pictures how those hands become characters in partnership with well-known music, from pop to opera, and a wittily sardonic script by Thomas Gunzig. But they do.

The subject is death, yet the scenarios are mostly hilarious, with the occasional chilling moment. And there is so much dancing: tap dance with thimbles on the fingers and the ghosts of Fred and Ginger in your mind; pole dancing; water ballet; abstract visuals with special effects; show dance and dance theatre; and a waltz of the flowers finale.

The transformation from film-making practicalities to on-screen magic is there for us to see. It is utterly fascinating and I hope there will be a return visit.

In contrast, Lyon Opera Ballet’s program of three short works is conventional – with a twist. Each is danced to Beethoven’s Grosse Fuge in different recorded versions – two by string quartets and one by the Lyon Opera Orchestra – and given unexpected styles that show off the vigour and versatility of this French company.

Lucinda Childs, a wonderful postmodern choreographer, has gone classical and produced a graceful, polite but repetitive and rather dull ensemble piece for 12 dancers with orchestral accompaniment. 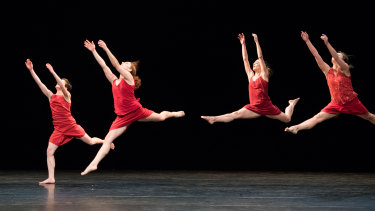 Maguy Marin’s choreography offers the most individuality in a playful response.Credit:Bertrand Stofleth

Anne Teresa De Keersmaeker has found more excitement for her eight dancers, most of them male and all identically dressed in black suits with white shirts. They speed across the stage and dive on to it in fast rolls, time and again. The music shapes their division of numbers and placement, providing variety in a narrowly focused piece that is interesting to see but not one of her best.

Maguy Marin offers the most individuality in a playful response to the quartet instruments. Four barefoot women in scarlet outfits range over the stage in loose-limbed actions that could be as everyday as shrugging shoulders or crisply technical in finely sculpted jumps.

It is tempting to “hear” particular instruments in the changing dynamics of their dancing, but Marin’s choreography is too good to be taken literally. It is delightful, the highlight of this program.

Matt Stone and Trey Parker Once Showed Up to the Oscars Wearing Dresses, While on Acid