This week, Harry Potter and the Cursed Child celebrates its first anniversary in Australia – a run in which "we have sold out every seat to every show," says the Australian production's producer Michael Cassel.

What's more remarkable is that just over half (51 per cent) of the 325,000 tickets sold to the two-part, five-hour production have gone to people who had never been to a live theatre performance before. 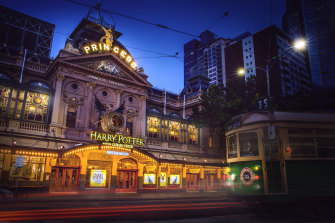 The Princess Theatre, the only home of Harry Potter and the Cursed Child in Australia.Credit:Tim Carrafa

"That is so exciting," says Pam Skinner, the show's international producer, who works for London-based Sonia Friedman Productions. "J.K. Rowling introduced a whole generation to literature – and now she's doing the same thing for theatre. New audiences are our lifeblood."

It's still well short of matching the longest-running play in Australia –The Ship That Never Was has been presented daily to tourists in Strahan, Tasmania, for the past 26 years – but The Phantom of the Opera's record as Victoria's longest-running show is now within sight.

The play's run is "open-ended", says Ms Skinner, and "it's tracking really, really well. I wouldn't like to put a figure on it, but three, four, five years. As long as anybody wants us, we'll be here."

So, you're saying it's here for at least three years?

And you're confident about being able to knock Phantom off its perch?

It's a bold prediction, based in part on the fact Melbourne is the only place in Australia audiences will ever be able to see Harry Potter and the Cursed Child.

"We've made the commitment to staying in one city," says Mr Cassel. "A lot of shows say they will be in one city and then will tour around; this absolutely will not go anywhere." 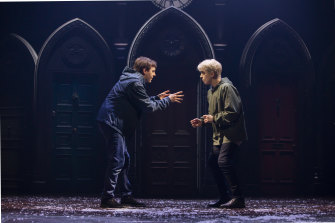 That's because it cost a small fortune to remodel the Princess Theatre to accommodate the show's plethora of tricks and stunts, and because exclusivity was a key part of the deal struck by the Victorian government when it lured the show here with an undisclosed contribution from its major events fund (a pot worth $62 million a year that a 2019 study says generated $2.5 billion a year of economic activity).

The state government released figures on Friday showing half the audience for The Cursed Child have come from outside Melbourne. More than one-third have come from interstate, and five per cent from overseas. 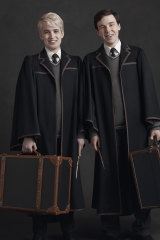 Nyx Calder (left) knows they have big shoes to fill but is delighted at the prospect of a long run.Credit:Damian Bennett

In a bid to do more to lure foreign audiences, Mr Cassel's team this week introduced an app offering real-time translations of the performance in six languages – Mandarin, Cantonese, French, German, Spanish and Portuguese. It is believed to be the first time GalaPro, which also offers descriptions for the vision-impaired, has been used in the Australian theatre.

Melbourne's was the third iteration, following the original on London's West End and the Broadway production in New York. A second American production, in San Francisco, opened in December, and a new production in Hamburg – to be performed in German – opens next month. Toronto follows later this year, with a Tokyo production (in Japanese) set for 2022.

There is, Ms Skinner says, "no cap" on the number of productions that might eventually be rolled out. But Melbourne's is the definitive one. "All the tweaks we made to it here have been incorporated into the other productions, including London and New York. It won't change from here."

Nyx Calder, who stepped into the role of Scorpius Malfoy this week, is certainly hoping the proliferation of Potters does nothing to dampen enthusiasm for the home-grown version.

"I'm really looking forward to doing this for a long period of time," says the 29-year-old Melbourne-born NIDA graduate, who made their professional debut in the Sydney Theatre Company's Lord of the Flies last year. "I'm always the actor at the end of a season who says, 'I wish I could do this for another couple of months, and really inhabit the character fully before putting it away'. This is a real gift for me."

It is a gift that comes with a challenge, though, in that they are replacing William McKenna, who won rave reviews for his portrayal in the original cast.

"There's been about 150 Facebook comments saying 'big shoes to fill'," Calder says with a laugh. "But if people see me and they have seen Wlliam's performance, which was lovely, I think they'll see there's quite a stark contrast in the ways we have each found into the character."

Attendiamus: Harry Potter and the Cursed Child casts a spell over audiences

Arnold Schwarzenegger and mini ponies urge seniors to stay inside

Three arrested at Wisconsin rally for Jacob Blake, including his uncle