The Hockeyroos have been upset 1-0 by India in a women’s hockey quarter-final boilover at the Tokyo Olympic Games.

Playing in only their third Olympics, India were given little chance against an Australian side that had won all five games and conceded just one goal to reach the final eight. 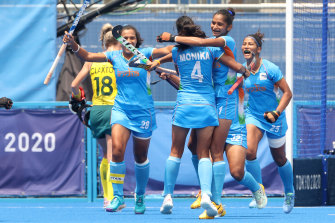 But the Hockeyroos were unable to crack the Indian defence, a Gurjit Kaur drag flick that bobbled home on 22 minutes the difference in the India women’s finest hockey moment.

Australia were unable to score from any of their nine penalty corners – they converted just two-of-25 across the tournament – while Rosie Malone hit the post after 90 seconds.

India, who only snuck into the final eight with wins over Ireland and South Africa, earned their win though, defending valiantly as Australia pressed in the final quarter.

India didn’t win a game in Rio five years ago but will now play for a medal for the first time, while three-time Olympic champions Australia’s wait for a first medal since their 2000 gold continues. 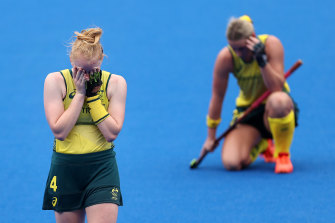 Amy Rose Lawton of the Hockeyroos in tears at the end of the match.Credit:Getty

US: Jennifer Garner finds it ‘sad in a way to see [Ben] move on and be so happy’

Did Chris Pratt Reveal He And Katherine Schwarzenegger Are Having a Girl? See His Misleading Instagram Post