Here comes a beaming Dr Ben Law – doctor not of medicine, in fact, nor law (that would have been nice synchronicity), but of screenwriting – bouncing into Arkibar full of energy, affability and bonhomie.

He’s a great hugger, so that’s what we do. ‘‘I like that we get to go on a bit of a date, Jason, in the guise of work.’’ Well, it is work, I tell him, because I am going to grill him mercilessly about his writing, his family, his sexuality. About everything. He doesn’t seem convinced or in the slightest bit fazed. After all, this is the man whom Dennis Altman once described as ‘‘the most charming self-promoter I have ever encountered’’. 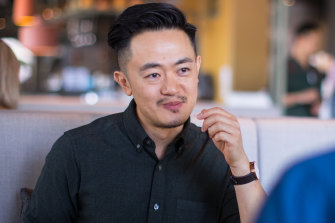 Benjaim Law relishes the collaboration involved in writing for the stage.Credit:Simon Schluter

Law is widely known for his books The Family Law (and the television adaptation thereof), Gaysia: Adventures in the Queer East, his journalism, his screenwriting, his recent ABC TV documentary, Waltzing the Dragon, his hard-hitting Quarterly Essay, Moral Panic 101, his Twitter escapades, other television writing and his self-applied label ‘‘local homosexual’’.

We are meeting in this South Melbourne cucina because it’s close to where his play, Torch the Place, is being rehearsed. It’s a stressful time, not least because it’s the first real play he has written.

I don’t really believe him when he says he doesn’t know what he’s doing, but he has a glass of riesling – he likes it very dry – because it will help with the afternoon rehearsal. He chooses the pasta special with prawns plus a side of french fries with truffle oil that we will share and a cos and avocado salad. I decide on a tuna salad. 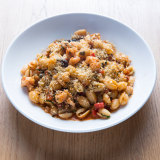 At this point he is up to draft nine of the play and it’s a matter of days before Torch opens. ‘‘Each draft is a major rewrite so I’m getting closer to knowing what I’m doing. I quite like the feeling of stepping off the cliff and not knowing what’s next. And I feel that all writing is not quite knowing what you’re doing; it’s a different story you’re telling every time.’’

Torch the Place is a comedy about a hoarder whose children have arrived to give her a surprise birthday present – a monster Marie Kondo-like decluttering. It’s a madcap sitcom set in this stuffed Chinese-Australian family home but with poignant elements to it as the mother’s hoarding is explored and family secrets emerge.

The children – one gay leftie (sound familiar?), one married daughter struggling with IVF, another daughter some sort of social media influencer – battle with their mother, themselves and their pasts. (It’s fair to say reviews have been mixed – in this paper damning, others more enthusiastic.)

What Law loves about the theatre is the difference in the creative process from writing for newspapers, magazines or even television. It’s all collaboration. He feels part of a community.

‘‘It is my work and I am the author, at the end of the day. In TV, actors come on as the last thing and you (the writer) leave as soon as the director comes on board. With theatre it was slightly confronting having the actors on board so early because it’s so exposing to have your work read out when you know it’s not finished.

‘‘You feel so naked. But that feeling is incredibly helpful as well. That kind of muscular spasm of horror you feel every time you can just intuit something’s so wrong, you know you need to change something … In this process, having the actors on board, it sounds so obvious but they have to inhabit their characters so deeply, they’re there guiding us through so when she says ‘where’s that coming from?’ and I’m not sure I know, that’s really good homework.’’

He talks about going back to his writing cave the previous night and bashing out another draft so I wondered whether he found writing easy. Does it come easy to him?

‘‘When writers say they love it and it comes easily to them, I’m like ‘you’re lying’. There’s that David Rakoff quote that I keep close to my heart: ‘writing is like pulling teeth. From my dick.’ At the end of the day there are moments of absolute joy, when the actual puzzle pieces are fitting in. But with writing you’re actually making the puzzle pieces as well and some won’t fit.’’ 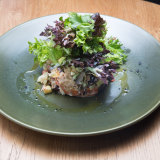 Law was born and raised in Queensland, but his stock is Hong Kong Cantonese. He has lots of family in Hong Kong, and feels intimately connected with the place. I wanted to know how he views the recent protests there.

‘‘My cousins, aunties and uncles have all marched. They are not political creatures in any way, shape or form, but this is something that has really galvanised every Hong Kong citizen,’’ he says.

‘‘What started as a protest against an extradition bill has really become a fight for cultural survival. Because if you look at the history of Hong Kong since handover, that creeping sense of mainland Chinese intrusion has manifested in things that are quite shocking for those who have grown up with democracy.’’

He points to the ticking clock towards 2047, 50 years after the handover of Hong Kong to the Chinese, when there is no guarantee about its future status.

After an experience like Waltzing the Dragon, suddenly I’ve got a very clear handle on who I am, where I fit into history. And the Hong Kong protests further clarified that.

‘‘I think in some way so much of what’s fuelling the protests is (the sense of) nothing to lose. Hong Kong is the place that commemorates the Tiananmen Square massacre every year. They really know what’s at stake and I think for me it has probably clarified a cultural identity that’s always shifted in my life.

‘‘I grew up in a very white part of Australia looking like this, not speaking Cantonese fluently so having your authenticity called into question. After an experience like Waltzing the Dragon, suddenly I’ve got a very clear handle on who I am, where I fit into history. And the Hong Kong protests further clarified that.’’

Waltzing the Dragon was the two-part series in which Law explored the history of the Chinese in Australia, partly through the prism of his parents’ experience. It involved separate trips to China, with his mother and father to where their families came from and the village where his father grew up. The real-life version of their divorce and its aftermath, it seems, was much messier than portrayed in The Family Law.

Waltzing changed his relationship not only with Australia and China but also his parents. ‘‘You feel more tender towards them.’’ And he found seeing them in the cultural context in which they grew up revelatory. He was conscious while making it that it was a once in a lifetime opportunity. Law is now 37; at this age, his mother had five children. That still amazes him. 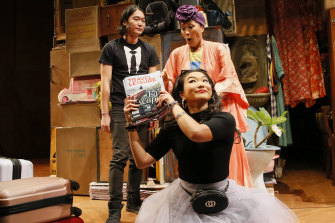 He reckons John Howard was right when he said we all need to know our own history, but Law says we need to know about all our histories. So in addition to being able to discover family history, ‘‘it’s this truth-telling of Australian history too. This shared lineage we all have whether we’re Chinese or not.’’

It was Pauline Hanson’s maiden speech in 1996, in which she said Australia faced being ‘‘swamped’’ by Asians, that got his political juices flowing. He began to feel vulnerable. A Chinese family friend was bashed; school friends’ parents started displaying One Nation stickers on their vans. ‘‘You used to be seen as different, but now your difference made you conspicuously a target.’’

At much the same time he was incresingly aware that he was gay and coming out at 17 coincided with starting university.

‘‘I feel like it’s about a year after you come out as queer … where you’re so serious because you’ve had this period of arrested development where you couldn’t engage with who you were truly but you catch up, you become very political, very serious, very Bolshie and it’s a discovery as well.

‘‘So there’s been dual discoveries: my Chinese, specifically Cantonese heritage and also my gay heritage and both of those things are inherently political and politicised. I don’t particularly want to talk about my sexuality and ethnicity all the time, but if other people are going to do it for me, I’d prefer to do it myself.’’

Law has a serious work ethic, which he reckons he inherited from his father and mother. ‘‘They were the living embodiment of that. Dad worked seven days and nights a week. And mum raised five children. If that’s not work, I don’t know what is.’’

As a freelance writer he hates the idea of letting people down. At the end of every day he plans every waking hour for the next day, including such things as lunch and exercise. ‘‘If I don’t have a map, I can easily derail.’’

So our lunch date is over – and Law is back to real work.

Torching the Place is at the Arts Centre until March 23. mtc.com.au 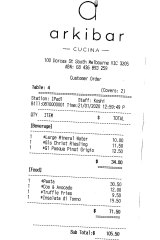 New holding companies are on the rise