Get out of the neigh! Moment bandsman is flicked in the FACE by a horse’s swishing tail during the Queen’s coffin procession in Windsor

This is the moment a royal bandsman was left shocked after he was whipped in the face by a horse’s tail during the Queen’s funeral procession in Windsor.

The blue-coated soldier was among the group of servicemen and women lining the road as Her Majesty’s coffin travelled to St George’s Chapel.

Footage shows the unidentified person staggering backwards after being hit in the face by the brazen animal.

None of the other bandsmen either side of the soldier react and all stay motionless as the awkward situation unfolds. 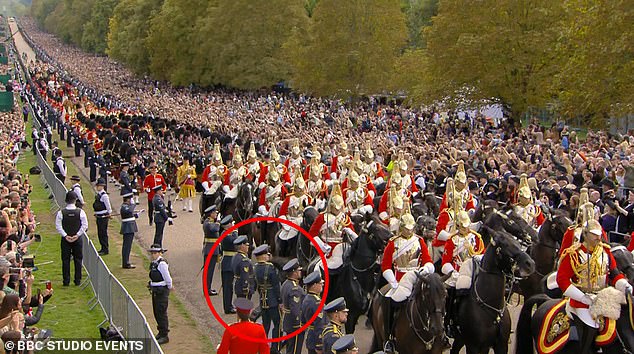 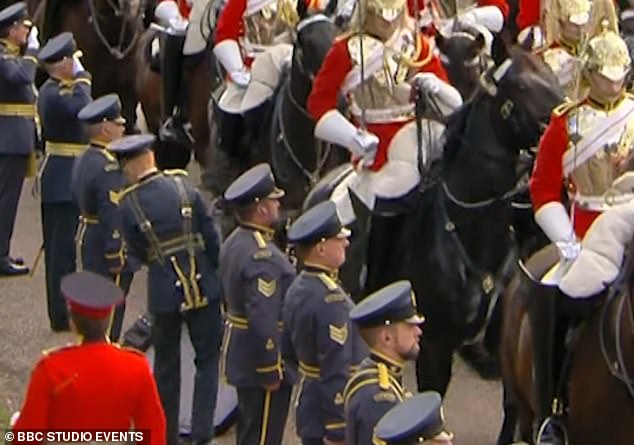 The clip begins by showing the royal guards standing by the side of the road as a troop of horse guards ride by.

Suddenly, one of the rides seems to momentarily lose control of his horse, with the animal slightly moving side to side.

The horse’s tail then swings up and hits one of the men in the face, making him take a step backwards before joining the line of soldiers again.

The video has racked up thousands of likes on TikTok, with one person commenting: ‘Dude. That was really personal.’

Another said: ‘Wow. Poor guy,’ while a third joked: ‘The horse remembers you… what did u do to him?’ 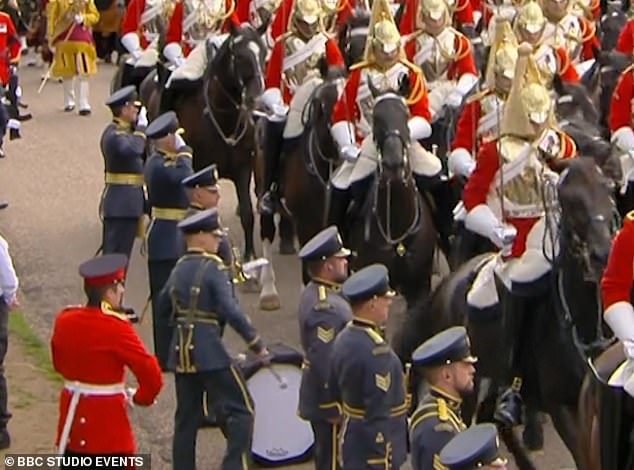 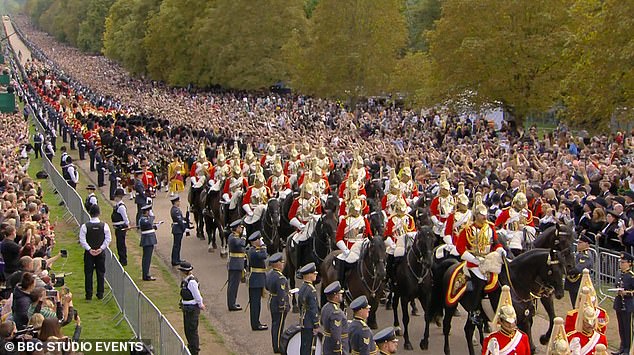 Reaction: The video has racked up thousands of likes on TikTok, with one person commenting: ‘Dude. That was really personal.’

The UK said ‘thank you’ and ‘goodbye’ to its Queen yesterday as she was laid to rest after a 70-year reign that helped define the nation.

The royal family has been left bereft by the death of their mother, grandmother and great-grandmother, and at times their grief was palpable with King Charles III looking emotional and close to tears at the state funeral.

The Countess of Wessex was also seen weeping during the long day as was the Duchess of Sussex, who returned with the Duke of Sussex to the royal family to share their grief.

But Charles and his family have been consoled by the support and love they have received from the public, including the tens of thousands who turned out to watch the late monarch’s funeral procession make its slow journey through the capital and on to Windsor Castle for the committal service.

The state hearse arrived strewn with flowers and with the cheers and applause of mourners ringing in the air, and waiting were three companions who knew the Queen well but would never speak of their friendship. 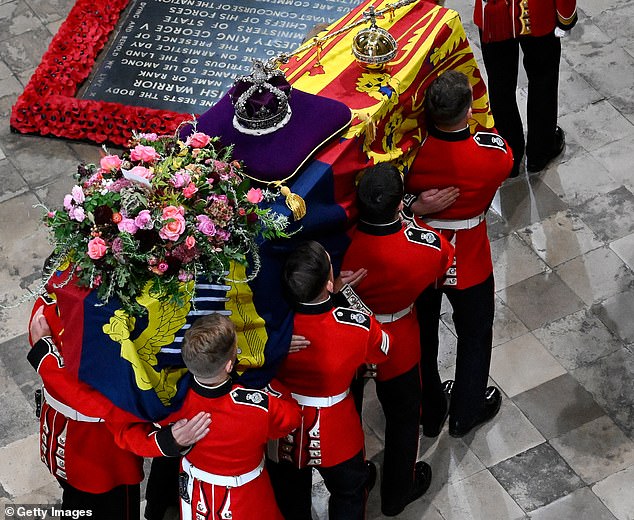 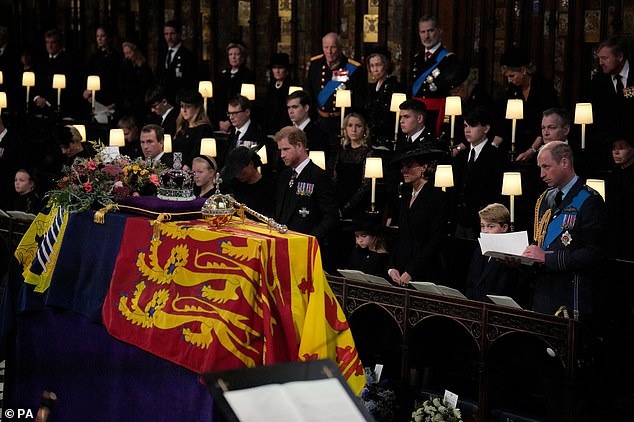 Members of the royal family (front row, left to right) Lena Tindall, Zara Tindall, Mia Tindall, the Duchess of Sussex, the Duke of Sussex, Princess Charlotte, the Princess of Wales, Prince George, and the Prince of Wales, stand for the coffin of Queen Elizabeth II during the Committal Service at St George’s Chapel

Muick and Sandy, corgis that were gifts from her son the Duke of York, were taken to watch the procession on its way to St George’s Chapel for the committal, and nearby her fell pony Emma was walked from the royal mews to see its owner pass.

The Queen was finally laid to rest with her husband the Duke of Edinburgh in the King George VI Memorial Chapel at St George’s during a private evening burial service attended just by close family.

The day was filled with personal touches, with the wreath adorning her coffin featuring a handwritten note from the King, saying: ‘In loving and devoted memory. Charles R.’

Charles had requested the floral tribute which replaced a wreath of Balmoral flowers with foliage and blooms cut from the gardens of Buckingham Palace, Clarence House and Highgrove.

The simple committal service at St George’s Chapel contrasted with the earlier state funeral, with the Queen’s close staff represented, including her senior dresser and personal adviser Angela Kelly, alongside individuals like Earl Spencer, the brother of Diana, Princess of Wales. 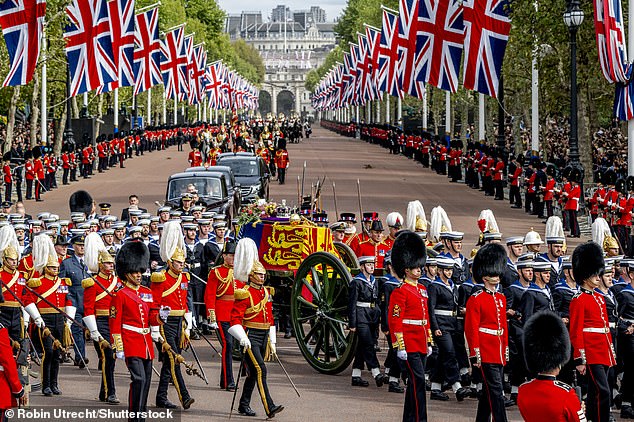 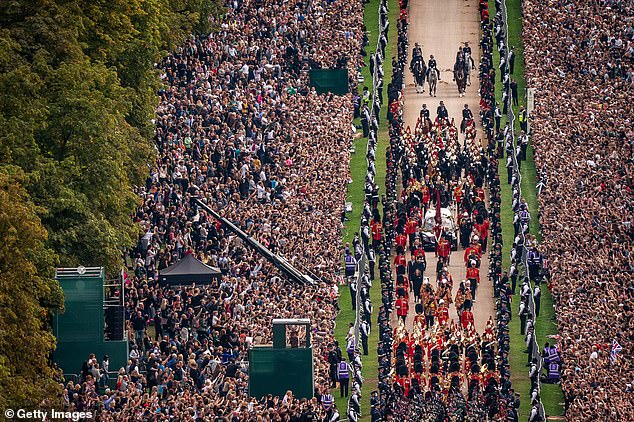 It was heavy with symbolism with the Camp Colour from the military unit personally commanded by the Queen – Queen’s Company, 1st Battalion Grenadier Guards – placed on her coffin by the King.

Baron Parker – the Lord Chamberlain and a former MI5 chief, and the most senior official in her royal household – ‘broke’ his wand of office by dismantling it into two halves and laying them on her coffin.

As the committal service drew to a close the sovereign’s piper, Pipe Major Paul Burns played a lament and walked away from the congregation, his tune fading into the chapel air.

Earlier in the day, the state funeral at Westminster Abbey was attended by dignitaries including hundreds of heads of state, and with London full with mourners the event called for the largest policing operation undertaken by the Metropolitan Police. 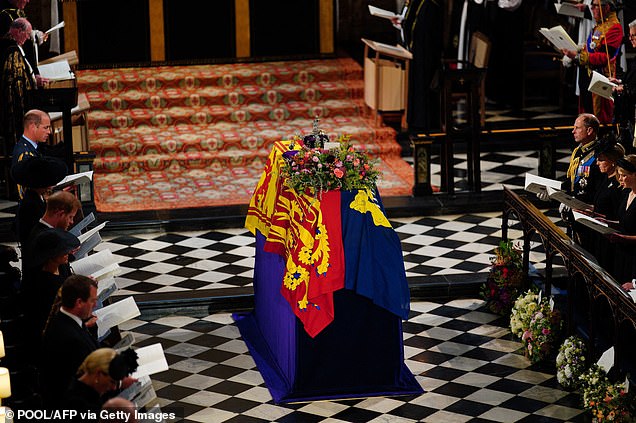 During his sermon, the Archbishop of Canterbury told the congregation the outpouring of emotion for the Queen ‘arises from her abundant life and loving service, now gone from us’.

Justin Welby described the Queen as having touched ‘a multitude of lives’ and being a ‘joyful’ figure for many.

‘But in all cases those who serve will be loved and remembered when those who cling to power and privileges are forgotten.

‘The grief of this day – felt not only by the late Queen’s family but all round the nation, Commonwealth and world – arises from her abundant life and loving service, now gone from us.

‘She was joyful, present to so many, touching a multitude of lives.’

Archbishop Welby, standing in the church where kings and queens have been crowned since 1066, also said that the Queen had declared on her 21st birthday ‘that her whole life would be dedicated to serving the nation and Commonwealth’.

He added: ‘Rarely has such a promise been so well kept. Few leaders receive the outpouring of love we have seen.’