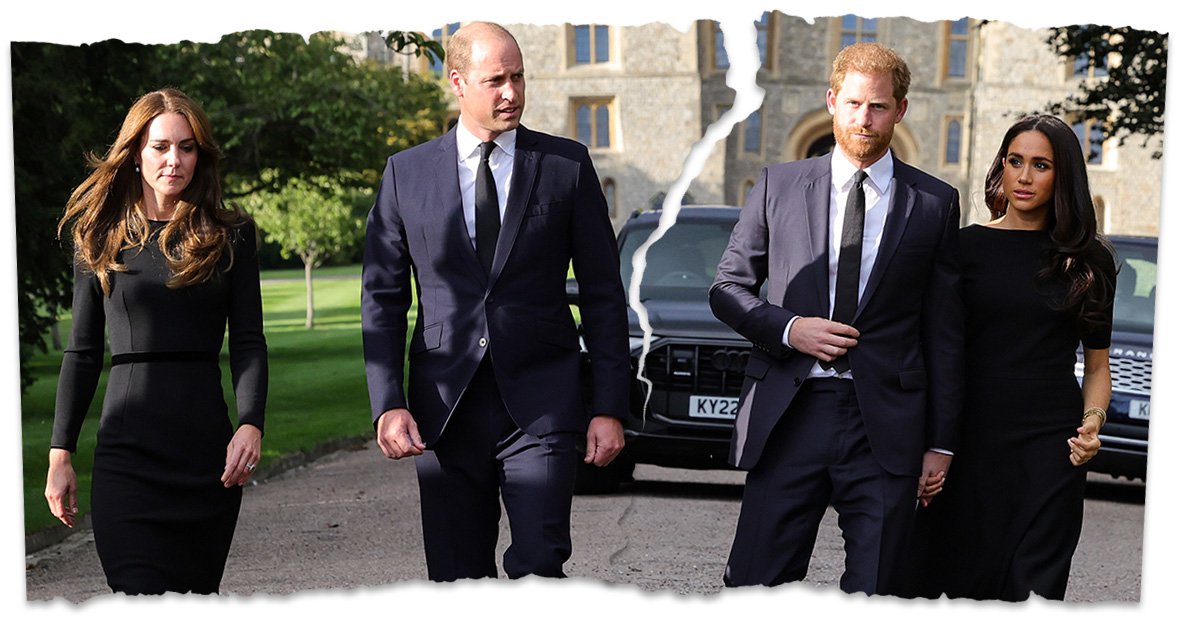 It’s no secret that the Royal Family was in a period of upheaval even before the Queen’s death.

Rumours have been abounding for years over tension between Meghan and Harry and the rest of the so-called ‘firm’, with rifts reported between the Sussexes and the new Prince and Princess of Wales.

It’s never nice to see siblings feuding after a bereavement – let alone two brothers who were previously known for their closeness.

That’s why many across the country breathed a sigh of relief to see William, Harry, and their wives reunite while paying tributes to their beloved late grandmother (the first time the ‘fab four’ have been seen together since the passing of Prince Philip in 2021).

Kate remarked ‘at times like these you’ve got to come together’ to mourners, and King Charles III also extended the olive branch to his youngest son in his first televised address, expressing love and wishing the family well as they ‘build their life overseas’.

This level of public scrutiny over personal conflict is far removed from what most of us will experience. The sudden loss of a loved one while conflict is unresolved, however, is something many of us will go through.

‘A death in the family is one of those pivotal moments when existing family dynamics can shift and change in the most powerful of ways,’ says Senior Therapist, Sally Baker.

‘It’s as if everyone is caught up in an emotional tornado and when they finally land safely back down to earth a family’s landscape is altered beyond all recollection.’

Family conflicts often centre around money, differing beliefs and lifestyles, or miscommunications that spiral out of control and lead to a stalemate.

Whatever was going on in your lives before the loss, though, will ultimately be overshadowed by duty, grief, and in many cases a sense that’s ‘life’s too short’.

A funeral will need to be planned, and you’ll undoubtedly be around the people you were at odds with. But should you let bygones be bygones or stick to your guns regarding fractious relationships?

Sally tells Metro.co.uk: ‘A funeral can bring family conflict into high relief and cause a permanent schism, or a death can be a full stop to family discord and a chance to put existing tensions aside.

‘This is particularly the case when people are grieving someone they were in conflict with. A death steals the chance of resolving conflict forever, which can make grief even harder to bear.’

Relatives who don’t get on may use geography as way to separate themselves from one another, but a funeral acts as a ‘magnet’ to bring them together – and one filled with intense emotions at that.

As a result, every action by bereaved family members is under a microscope.

According to Sally, bereaved people ‘often remember each response, or gesture or sentiment expressed by members of the congregation.’

While it may be tempting to say your piece to those you feel aggrieved by, heightened tensions and societal expectations around grief make it the worst possible scenario to do so.

‘For those struggling with the distress of bad blood at a funeral saying less might create more sanctuary than speaking out,’ says Sally.

Even if you’re still feeling hostile towards a fellow mourner, you won’t resolve things by bringing it up at the funeral. If anything, you’ll come across as the aggressor for doing so, cementing a negative perception in the minds of those you want to support you.

Sally adds: ‘A funeral is a day for kindness and contemplation and not a day for settling old scores or resentments.’

Writing a letter to the person you’re arguing with – and, crucially, not sending it – can help you work through your emotions ahead of the day. Petty squabbles will feel less significant when down on paper, and you may even be able to see their point of view a little more.

Avoiding alcohol at a wake is also helpful to stay in control of your responses, as is reaching out ahead of time to offer condolences and head off potential in-person awkwardness.

There will be some conflicts which don’t have a resolution, perhaps because of serious issues like abuse or violence. In these cases, it’s usually best to avoid interacting with the aggressor where possible, sticking with those you’re close with and keeping things civil.

If gossip starts up, shut it down. Bring the conversation back to your lost loved one and your shared history with them, or pay your respects and then leave with your dignity if it begins to escalate.

Try to remember how you want to remember this day. Would you like your loved one to be peacefully put to rest, or would you prefer a bust-up that ends in tears of anger rather than sadness?

Even if you don’t feel able to ‘be the bigger person’ and seek to resolve your dispute going forward, do your best to put your troubles to the side for this one day.

A funeral isn’t about you, them, or anyone but the deceased. Show them how much you care by turning the other cheek while you say goodbye.

A heavenly hike: Waliking from the Eiger to the Matterhorn Swiss Alps

Confectioner is raking in the dough with masked chocolate Santa