Yung Baby Tate knows that the best party tracks are the kind that make you feel good about yourself. It’s why her single “I Am” gave rise to 2020’s most viral affirmation. TikToks and Instagram videos abound with the song’s opening credo: “I am healthy, I am wealthy, I am rich, I am that bitch.” Thousands of people recorded selfie camera meditations to the track, the pandemic equivalent to having clubs jumping the world over. The song helped her debut on Rolling Stone‘s Breakthrough 25 Chart at Number 11.

For Tate, whose real name is Tate Sequoya Farris, seeing the song succeed meant sharing something special. “It feels amazing to be a part of people’s self-love journey,” she said. “I Am” is from the 24-year-old singer’s latest EP, After the Rain, which was released in December. A collection of songs about rebuilding yourself from the ground up, the record was inspired in part by a particularly painful breakup. “After you’ve gone through something super messed up, and the rain has just been drenching…” she explains. ”I was telling these things to myself, to remind me that the rainbow is going to come back out.”

Even the record’s more somber moments, like the 6lack-assisted “Let it Rain,” don’t succumb to despair. Tate finds a way to make heartbreak something to dance to: The song’s moody chorus feels at home over its submerged club production. Despite quarantine, it’s easy to imagine the song playing soundtrack to a particularly ecstatic night out. “I’ve always loved to tell stories in my music,” Tate says. “Even if they’re not stories that I have gone through.”  Her skill hasn’t gone unnoticed. Last spring, she signed to Issa Rae’s Raedio imprint at Atlantic Records, and her music has been featured on Rae’s Emmy-nominated series, Insecure. 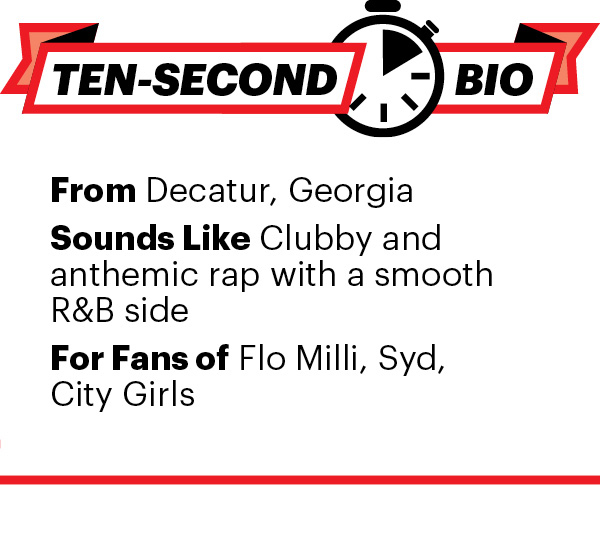 Tate went to performing arts school when she was younger, and she has studied, and excelled, in everything from music to choreography. As a teen she started using her mom’s old computer to make beats, and before long she was uploading songs to the internet. Her first EP, 2015’s ROYGBIV, is described on her Bandcamp as a “sonic journey through a rainbow, written, produced, and sung by Tate.” It’s an ambitious idea executed gracefully; Tate’s emotional tenderness shines through. After a string of solid EPs, Tate released her debut, Girls, in 2019. The album was a proof of concept, an exploration of the kind of empowerment central to Tate’s music. “Oftentimes I say that I make music for the girls in the game, but the boys can come if they want to,” she says.

Tate welcomes the back-and-forth that comes with being on social media — she famously drew attention with a Nicki Minaj remix, “Babytron,” in 2019. There’s an inherently collaborative spirit that drives her output, especially when it comes to uplifting the coming generation of female artists. Girls featured a broad scope of young female MCs, from Bbymutha to Mulatto. “I Am” features Flo Milli, who’s on her own rapid rise to stardom, and Tate recently appeared on the Zimbabwean-born rapper Tkay Maidza’s “Kim,” an elastic ode to the woman who famously broke the internet.

Tate is also a talented performer: In the video for her single “Rainbow Cadillac,” the choreography is as spellbinding as her voice, which modulates effortlessly between singing and rapping. We cut from Tate, flanked by equally adept backup dancers, to Tate and her crew in a drop-top Cadillac. It’s a playful fantasy that gives credence to one of the track’s standout lines: “If it wasn’t for corona, I’d pack this club.” She’s right.

Quarantine hasn’t been easy on Tate, she admits, but part of the process of working on After the Rain was working through that difficulty. “I think I found my mojo again and was like, ‘Look, we’re just gonna power through this and get creative,’” she says. “I’m blessed to have been able to find a way to still have my music permeate, even though we can’t be out and performing.”

It’s also given her time to sharpen her own vision. She says she’s excited about the new music she’s recording. “I’m going way more into an R&B space, which I’ve been kind of hinting at for a long time,” she says. “You know, I’m not just a rapper. I’m an artist.” She’s also seeing this year as a time to grow: “I think it’s an appropriate time to just be more real, more honest, more truthful.”

'Grey's Anatomy': Eric Dane's Posts a Memento of His Return as Mark Sloan and Fans Are Loving It

The Vow: After Rising Up NXIVM's Ranks, Here's What Happened to Lauren Salzman