The Howard government was faced with public outrage when a number of residents in a Melbourne nursing home sustained chemical burns when given kerosene baths as a cheap alternative to standard treatment of scabies.

Nursing staff who objected and refused to comply lodged a complaint but instead of any public punishment the government agency set about a drawn out regulatory process of mediation with the owners of the home. 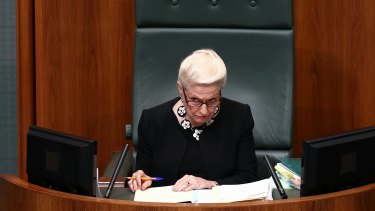 Bronwyn Bishop was heavily criticised for her handling of an aged care scandal in 2000. She would later be made Speaker of the House of Representatives.Credit:Alex Ellinghausen

When the scandal was exposed by a whistleblower, then aged care minister Bronwyn Bishop was driven to force the Aged Care Standards and Accreditation Agency to initiate surprise visits and a range of reforms.

The government would also be able to fine nursing homes up to $33,000 a day for having a disqualified person as one of the operators or "key personnel". Individuals could also face up to two years' jail for failing to declare they were a disqualified person who was either a bankrupt, had a conviction or was of "unsound mind".

Mrs Bishop argued the amendments would improve the protection of the health and safety of nursing home residents.

Her submission also sought to reassure cabinet that work was underway to address the lack of supply of appropriately qualified registered nursing staff for aged care and inconsistent nursing registrations requirements between states and territories.

The scandal exposed many failings in the oversight of the sector with providers given ample warning of inspections and therefore the opportunity to bring in extra staff and documentation before they were visited by the agency's assessors.

A damning Ombudsman report found assessments did not reflect the real situation in nursing homes and even those who failed accreditation were not penalised. Instead the agency had appeared to go to extreme lengths to accommodate them.

"The proposed commissioner would be the public face of the scheme and would, amongst other things, have responsibility for ensuring that all complaints are dealt with in an effective, efficient and coordinated way," she wrote.

Comments from Mr Howard's department said the implementation of these reforms would "go a long way" towards restoring public confidence.

"The department notes there have been, and continue to be, public concerns about the quality of residential aged care, particularly appropriate staffing levels, the effectiveness of the Complaints Resolution Scheme and the capacity of the Aged Care Standards and Accreditation Agency to ensure quality of care," the submission said.

It warned the agency's two major tasks by the end of 2000 were to finalise accreditation processes and conduct "sufficient spot checks to ensure community confidence", noting it would be "difficult" and require "careful handling".

Tiger King Spin-Offs are Coming, But Do We Want Them?

How to politely decline a handshake to avoid coronavirus

Shocking moment concrete bridge collapses on top of a car

Jade Pettyjohn Reveals How She Was Inspired By Reese Witherspoon