Even the pros have signature recipes that are designed to produce the perfect plate of French toast.

To find out which star chef has the best version of this brunch classic, I followed signature recipes from Guy Fieri, Robert Irvine, and Alton Brown.

Read on to see how these celebrity-chef recipes stacked up. 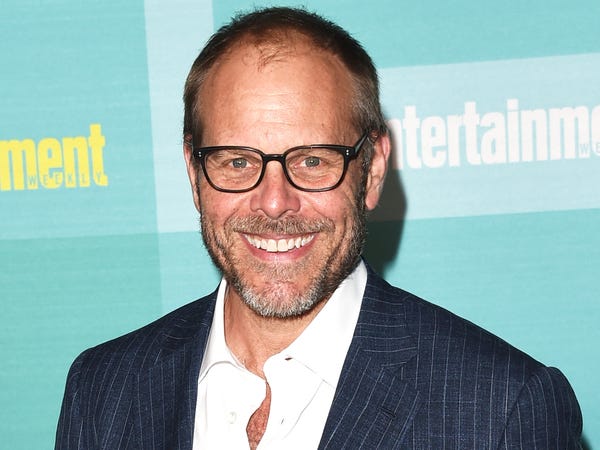 I also watched Brown's video, where he emphasized the importance of using day-old bread because when the bread is slightly stale, it will soak up the custard mixture best.

If the bread is fresh, it will be too soft and when it sits in the custard, it will become far too soggy and will break apart. 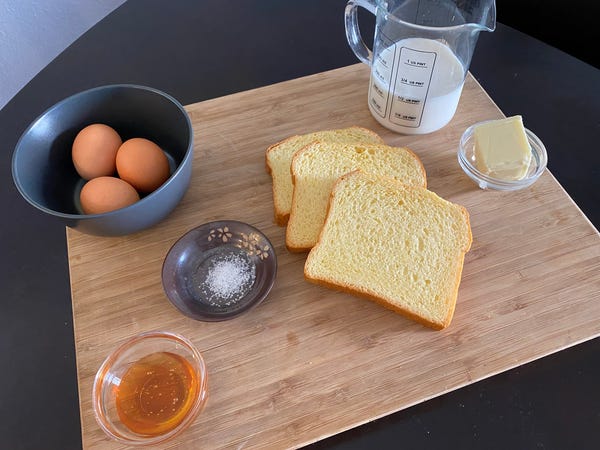 I started the process by mixing the eggs, honey, half-and-half, and salt into a thin custard. Then, I soaked the day-old bread in the mixture for 30 seconds per side for each slice.

Unfortunately, my bread was not "old" enough. Brown was right in saying that fresher bread can be tough to work with, but I still managed to dip and soak each piece of bread as instructed.

After the slices were coated, they needed to sit on a wire rack that's been placed in a sheet pan for about two minutes. Then, I had to cook the French toast on my stovetop, browning each side in butter until the whole slice was golden brown.

Following Brown's instructions, I then put my golden French toast back on my wire-rack setup and cooked it in the oven for about five minutes. According to Brown, a combination of frying and baking French toast will result in a creamy center and crispy exterior.

Brown's French toast had a great texture, but some pieces were a bit too eggy. 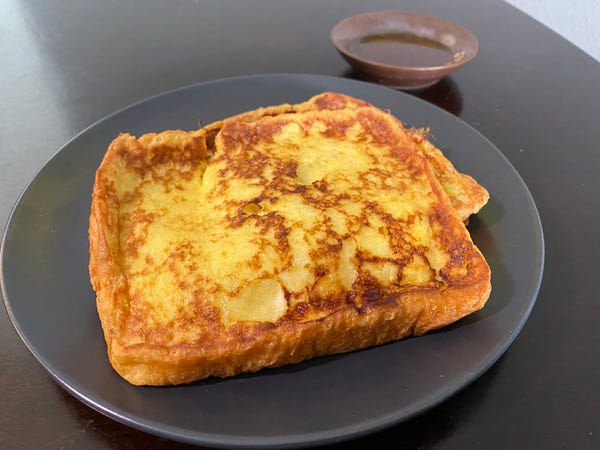 As expected, the texture was spot-on — the center was soft and slightly creamy, and the exterior was golden with a slight crisp.

But I think this French toast recipe definitely needed some syrup or fresh fruit to enhance the flavor.

And, unfortunately, the egg mixture clung to heavily to some parts of the bread, making it taste a bit eggy in some spots. This might be because my bread was too fresh, but I think it could also be a result of the thick, custard-like consistency of the egg mixture. 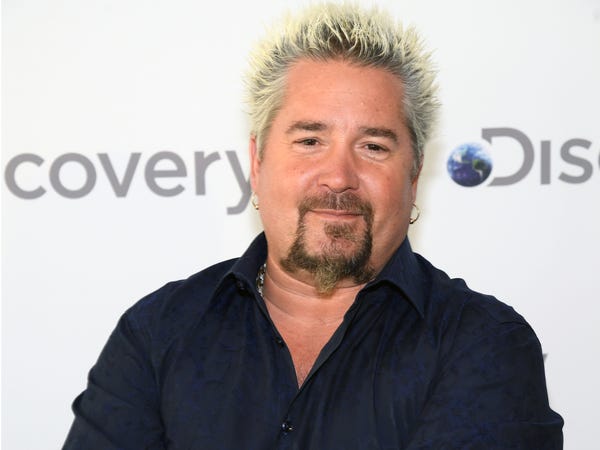 Guy Fieri's signature recipe for French toast was way more complicated than the others — but considering he's known for going big with his dishes, I couldn't say I was too surprised.

To make Fieri's French toast (and the caramel sauce that's meant to accompany it), I had to buy several ingredients, including three different types of alcohol.

Even buying the cheapest, smallest bottles available, the alcohol alone cost about $40. That's not even counting the cost of the other ingredients like milk, cinnamon, and brown sugar.

This was, by far, the most expensive dish to make.

The process of making this French toast was long and frustrating. 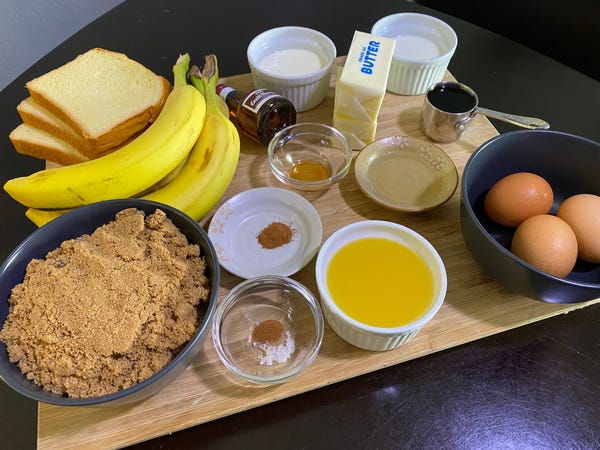 Despite closely following instructions, I spent quite a while getting my caramel sauce to thicken. I guess I wasn't watching it closely enough while it simmered, either, because it boiled over into a hot, sticky mess on my stovetop.

Then, while also dipping and frying my bread, I needed to carefully sauté some sliced bananas.

The Fieri French toast was a complete hit. 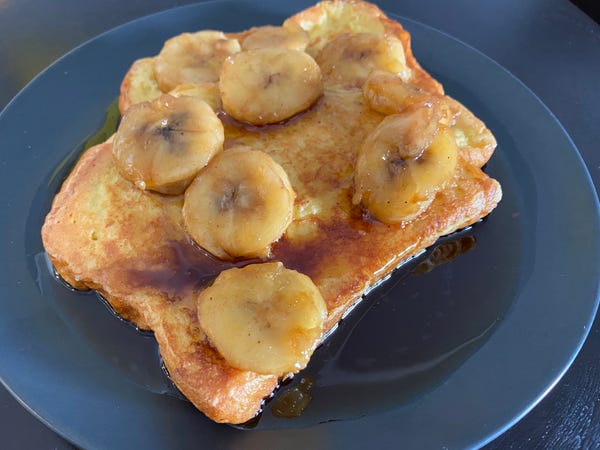 Although it was complex and frustrating to make, this dish was a total knockout.

The French toast was soft but slightly crispy. The bananas gave it a hint of freshness, and the caramel sauce was so sweet and delicious. Because of the flavorful caramel, this recipe definitely didn't need any syrup.

The Fieri French toast would be an impressive dish to make for brunch if you were able to make the caramel sauce ahead of time — I imagine it would reheat nicely.

My only issue with the dish is that it lacked any sort of crunch, and I think some crushed walnuts would've been a nice touch. 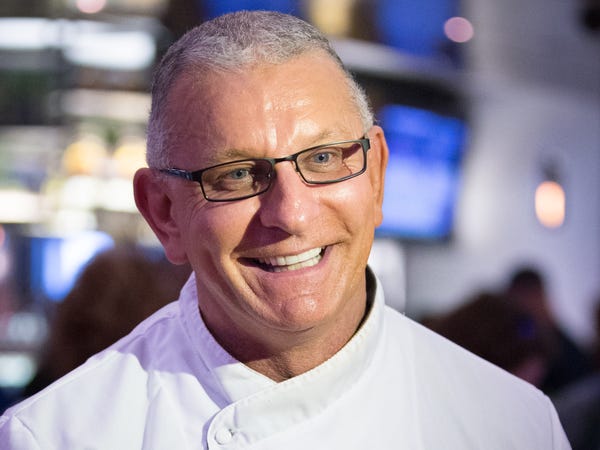 Like Brown's recipe, Irvine's signature French toast recipe also had a simple ingredient list full of items I already had in my kitchen.

Irvine's recipe was so easy to follow, and my French toast didn't take long to prepare. 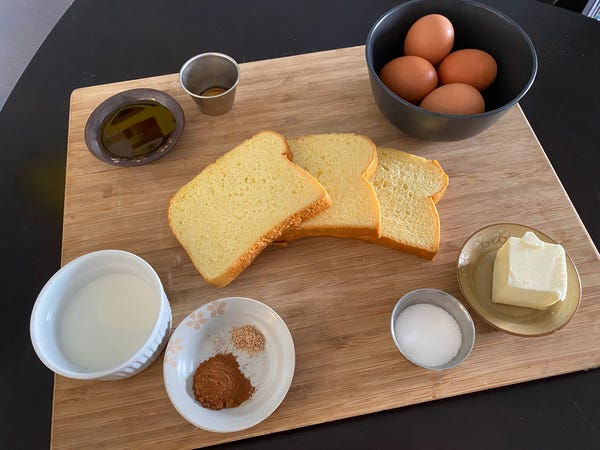 After whisking together the egg mixture, I dipped my French toast in it, fried it until it was golden brown on each side, and then served with syrup.

This French toast was done in just a few minutes and the process was so simple I could see myself making this before work on a busy weekday.

The French toast turned out soft and sweet, even before I added syrup. 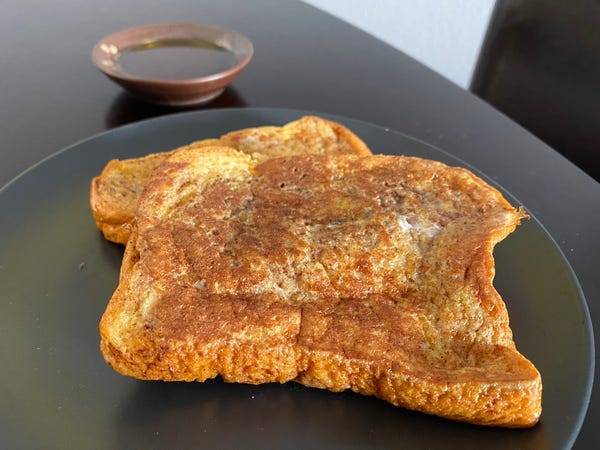 Thanks to the sugar, cinnamon, and nutmeg, this French toast had a nice, sweet flavor even when I ate it plain.

It also turned out quite soft and fluffy, and although I would've enjoyed a slightly crispier exterior, the texture was still great, especially considering how quickly and easily the entire dish came together.

If you want a simple, satisfying breakfast, this is a great recipe to follow.

Despite the delightful simplicity of the other two recipes, Fieri's souped-up French toast was my favorite. 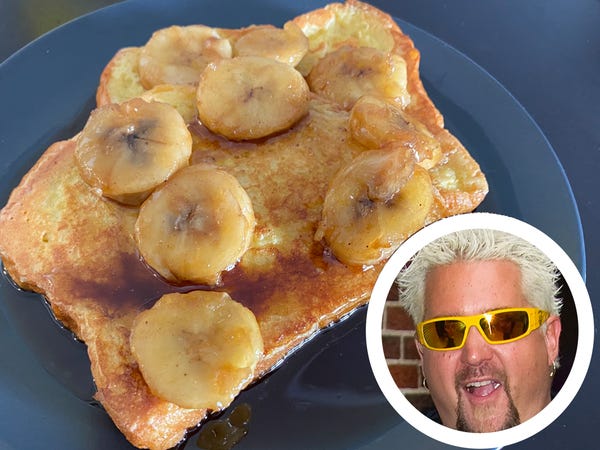 Sure, there was a daunting list of ingredients and a hefty price tag attached to Fieri's dish, but it was worth all of the hassle.

The rich flavors of dark rum, brown sugar, cinnamon, and vanilla just packed much more of a punch than the other French toast I prepared

But this heavy, sweet dish is definitely not for the faint of heart and I think Irvine's and Brown's signature recipes are great, classic options if you just don't have the time, stomach, or budget for this one.

In the age of coronavirus, NHS staff are (quite rightly) our A-list heroes

Sick of Paying For Gel Manicures? I Got Everything I Needed For Less on Amazon

Giants trainers helped save the life of Logan Ryan’s wife

The Education Lost When Our Colleges & Universities Go Virtual