Nick Cordero — a successful Broadway actor, who starred in musicals such as “Bullets Over Broadway,” which earned him a Tony Nomination; “Waitress”; and “A Bronx Tale” — died from COVID-19 on July 5, 2020. Amanda Kloots, Cordero’s wife, documented the actor’s health journey on her Instagram account.

Cordero was hospitalized in March 2020 with pneumonia symptoms and tested positive for COVID-19. He was placed on a ventilator and put into a medically induced coma. He underwent dialysis, had his leg amputated due to blood clots, was placed on a heart-lung bypass machine, suffered mini strokes, and lost a ton of weight, per NPR. Fans followed his journey closely through Kloots’ regular social media updates and a GoFundMe page set up for his medical bills raised nearly $800,000, per NPR. The couple’s son, Elvis Eduardo, was just 13 months when his father eventually passed away. Kloots recently shared a photo of their son on his first day of preschool, revealing that she felt super emotional that morning.

After Broadway went dark 18 months ago, the curtain is rising again. Find out how Broadway is planning on honoring the Tony-nominated actor.

This subtle tribute will appear in Waitress 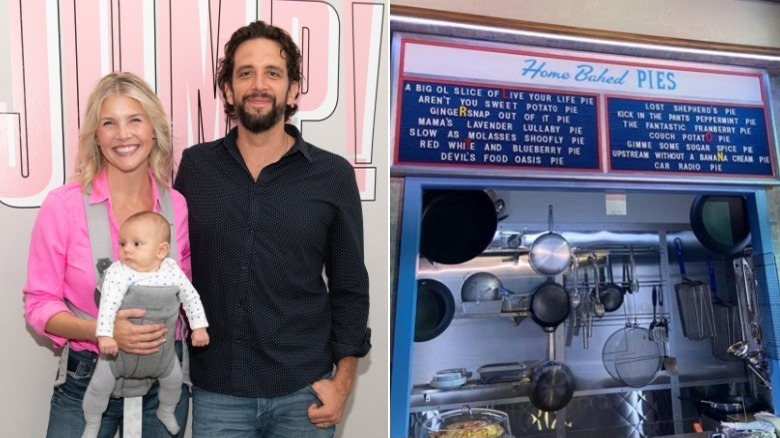 Nick Cordero originated the role of Earl, an abusive husband, in “Waitress.” He played the part from April 2016 through September 2016, at which time he moved on to originate the role of Sonny in “A Bronx Tale The Musical.” Despite his short run in “Waitress,” the show has found a way to honor his memory.

Their official Instagram account posted a photo of the diner menu, alongside the caption, “This week, we honored the memory of our beloved cast member Nick Cordero. His wife, @AmandaKloots, visited the diner as we unveiled the sign featuring ‘Live Your Life Pie.’ This special pie name, and moment in the show, will be a permanent part of every Waitress production in the world.”

Amanda Kloots also shared a video of her and her son Elvis traveling to the unveiling of the sign and shared a cute story about the 2-year-old. “Elvis started singing Nicks song from the show yesterday when we were driving home from the beach and my heart about exploded in a million pieces,” she wrote. “I love that he knows Dada’s voice and wants to sing along. He kept making me repeat the song over and over again! We sang it all day together.”

Opinion: 700 days later, March Madness is finally back, and how we missed it

Southern Charm: Why Danni Baird kicked Kathryn out of her house