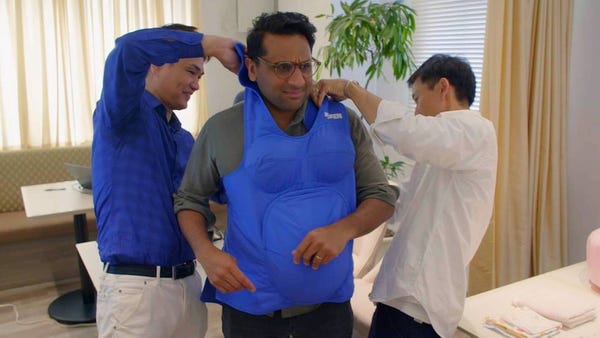 One in three marriages in Japan end in divorce, and absentee fathering is a common cause of marital conflict. The solution? Make fatherhood a sexy idea to men.

That was the mentality behind Japan's Ikumen Project, a campaign meant to get men more involved in child-rearing with a hunky hook. The word ikumen is a portmanteau of ikuji (childcare) and ikemen (hunk), bringing to mind an image of a sexy dad adept in all things baby-related.

This concept of fatherhood has been gaining momentum over the past decade since the Japanese Ministry of Health launched the Ikumen Project in 2010. One of the cornerstones of the movement is ikumen class, a parenting seminar geared towards single men.

The classes got renewed attention last month in the new HBO Max docuseries "Ravi Patel's Pursuit of Happiness." Actor and comedian Patel enrolled in ikumen class during the Japanese leg of his globe-trotting journey to learn how different countries treat universal challenges such as parenting and retirement.

The class features lessons in diaper changing, infant bathing, and what not to say to your wife

The ikumen class featured on Patel's show opened with some do's and don't's for marital communication. A big don't: saying something like, "You're not working, so you have so much time on your hands," to a stay-at-home mom.

The instructor warned the ikumens-in-training that they should not ask their future wives if they need help with the baby; instead, they should just do it. Next, they prepared to lend a helping hand by practicing diapers changes and bathing a baby doll.

"It's good to see classes like that pop up, but it was really eye-opening to see how low the expectations are for men," Patel told Insider.

Patel already has a wife and child of his own, but some elements of the experience were new for him. He got to briefly imagine the feeling of being pregnant by donning a heavy pregnancy suit complete with a belly and breasts in an exercise meant to inspire some empathy towards moms-to-be.

Ikumen classes are marketed towards single men trying to get hitched, not just fathers-to-be

While ikumen classes might resemble prenatal courses attended by expectant parents around the world, not all of the attendees have kids on the way. In fact, many participants are single guys trying to increase their appeal to women.

Women might be more attracted to men who show an interest in babies, according to a study published in the Journal of Human Behavior in the Social Environment. The social experiment found female participants gave their phone numbers to a man 40% of the time he asked after they saw him playing with a baby in the waiting room, compared to 12% of the time when he ignored the baby.

Patel said he's all for sharing the load with his wife when it comes to parenting, but he's not so sure that fatherhood has boosted his sex appeal. He thinks the "dad bod" trend is a myth.

"No one's putting that up on their vision board, being like, 'I want a guy with an obscure shape. I want a lazy tired man with no definition and wrinkles,'" Patel said.

But after completing the course, Patel said he thinks all men should be required to take an ikumen class before becoming fathers — even if the "childcare hunk" appeal only applies to those who were hunks to begin with.

Rising Pop Singer Ren, 17, Releases Video for 'I Drive Me Mad' Inspired by Her Battle with Anxiety