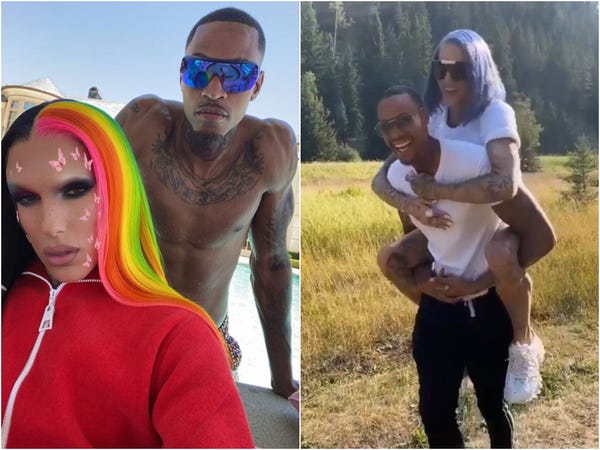 Jeffree Star and Andre Marhold's month-long relationship has come to an end. But, in true Jeffree Star fashion, the drama continues in an online feud.

Star accused Marhold of stealing Louis Vuitton bags in an Instagram story where he belittled Marhold for having no money and no life. Meanwhile, Marhold threatened release unspecified information about Star that he claimed could be damaging.

The pair started dating in August, seemingly out of nowhere, and caused controversy straight away. Marhold, who is a professional basketball player, was met with homophobic comments online, and Star denied theories that he was paying Marhold for sex.

The couple were all smiles during the first few weeks of dating, going on walks together and hanging out at Star's $14 million, 25,000-square-foot mansion in LA's Hidden Hills. But things have since soured, and heated social media messages between them last night seem to have confirmed the relationship is no more.

How the drama unfolded

Theories about the breakup started late on September 30 when fans noticed a comment from Star on one of Marhold's Instagram photos of the two of them together.

"Hey! Since you can't answer the phone right now, can you give me all the stuff back that you stole from my house?" he wrote. "What kind of lowlife f—ing scum does that? Give it back!!!! If you need a return label, just ask."

Star then addressed rumors that he was robbed in a video on his Instagram story, which has since been removed.

"I'm sure a lot of y'all can relate, but sometimes, when you meet people, surprise — they're not really who they say they are," he said. "Jeffree Lynn got a little played."

He said he'd been hanging around with "someone" recently and it was "nothing serious."

"But I was presented a whole different person than who this man really was," he said. "About a week ago, Jeffree Lynn discovered a lot of things. And this person secretly had no job, no money, not even a bank account. And this person is 30 years plus."

Star said he called an end to the relationship after the truth emerged, but that's when he realized a few Louis Vuitton bags and some pairs of sunglasses were missing.

He said he wasn't complaining about the money because the items could be easily replaced, but it was the principle of stealing that he thought was wrong. He said he also didn't like that Marhold was posting like he was still at his mansion.

"It was just weird, and I'm not about being around weird energy," said Star. "And if you're not doing anything with your life, I can't be around that. I'm a boss a– bitch. I'm a Scorpio. I don't do that energy."

He reiterated that "two adults" simply went their separate ways, "but b—-, can I have my s— back?"

Marhold then decided to write his own narrative. He posted several threats and claims on his Instagram story, including that he found "something" in Star's room. Marhold said he would release information about Star if he didn't take down the Instagram story accusing him.

"Care if I share with your supporters?" he wrote. "Let's just say this is going to ruin you."

UPDATE: Jeffree Star’s ex-boyfriend Andre Marhold goes on a rampage exposing Jeffree before Jeffree deletes the stories about the situation from Instagram and SnapChat. In the posts Andre exposes Jeffree for cheating on Nate Schwandt and for having something in his room. #jeffree #jeffreestar #jeffreestarcosmetics #jeffreestarapproved #andremarhold #jeffreestarboyfriend

He also made claims about Star's long-term ex-boyfriend Nate Schwandt, with whom Star broke up with in January.

"You miss Nate but you f—ed his friend I don't understand," wrote Marhold. "You didn't even tell your supporters you hit me up oddering all these expensive things for my time. I have proof of what I posted, I have your name on paperwork, your name on pill bottles etc. We can do this all night."

He also posted a screenshot of a DM where Star threatened legal action.

Star has removed the initial video on his story after Marhold's threats to release information about him. However, one meme remains: "Every time I start trusting someone God slap the back of my neck with His sandal."

A few hours later, Marhold posted a story on his backup Instagram account. He looked into the camera while a song in the background with the lyrics: "Guess this b—- is scared of me."

In his latest post, he asked Star to unblock him so they could "talk about this."

A lot can change in a few weeks

It just shows how much can change between summer and fall. A third account claiming to be Marhold posted a happy selfie of the couple together four weeks ago. It's unclear if the page belonged to Marhold or not because he asked his followers to report the page last night.

Either way, the picture was initially a celebration of the harmless fun they were having together. Last night, it had a different message in the caption.

#AndreMarhold sends a message (see previous post) to #jeffreestar. He actually went to his backup page to old pics and updated the captions.

A post shared by Entertainment Takeover (@entertainmenttakeover_) on Sep 30, 2020 at 7:09pm PDT

Insider has reached out to Marhold, representatives of Star, and the LA County Sheriff's department for comment.

Four months after adopting my seven-year-old son, he tried to strangle me