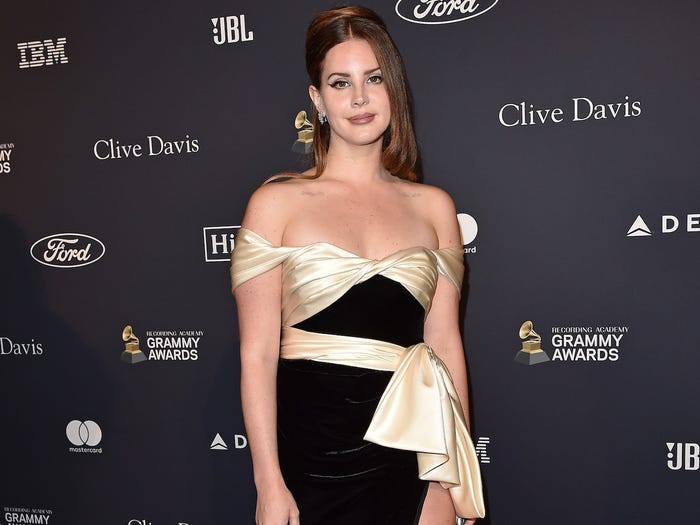 Lana Del Rey is responding to the backlash she faced after wearing a controversial face mask last month.

In October, the musician attended a book signing at a Los Angeles Barnes & Noble while wearing a beige mask made from mesh and sparkles. Her skin and mouth were visible underneath, seemingly revealing that there was no protective layer sewn into the face covering.

On Tuesday, however, Del Rey said her mask actually had a layer of plastic under the mesh in response to an article from The Michigan Daily that questioned whether or not Del Rey deserved the harsh criticism she received.

In the Michigan Daily piece, writer Madeleine Virginia Gannon argued that while speculation surrounds Del Rey — ranging from questions about her music to her political preferences — it's unclear whether or not "the 'high courts' of the internet" should have the power to deem celebrities as "problematic."

"Does a mesh mask disqualify her from our love?" Gannon asked of Del Rey's mask choice. "It seems such an insignificant misstep for an idol who the world has cherished for so long. But the pandemic has killed hundreds of thousands of people — a number so large, it seems unfathomable."

"Mask etiquette has become synonymous with compassion, intelligence, and human decency," Gannon continued. "Del Rey's fashion choice feels like a slap in the face for those who have been intimately hurt by COVID-19 and for those who wear their masks without issue. Celebrity status does not exclude Del Rey from responsibility."

Del Rey seemingly enjoyed Gannon's writing, calling the piece a "great article" on Twitter. But she also offered some insight into the reality of her face mask.

"The mask had plastic on the inside," Del Rey wrote. "They're commonly sewn in by stylists these days. I don't generally respond to articles because I don't care. But there ya go. Same goes for everyone's masks in my video. I'm lucky enough to have a team of people who can do that."

"Again not that I believe it's anyone's business at all — but I made it clear who I voted for," the musician went on to say in another tweet. "And I don't glamorize tough relationships. Relationships can just be tough. Period. Every other singer sings about the same damn thing. Always have, Probably always will. Thanks stay tuned."

Representatives for The Michigan Daily and Madeleine Virginia Gannon did not immediately respond to Insider's request for comment.

After Del Rey shared the tweets, a fan reached out over Twitter and said: "No hate but took you long enough."

Del Rey then replied: "Bro I'm working on two albums and excitedly and happily donating a million dollars throughout the nation. If I responded to everything I would be 🤷‍♂️."

As Insider's Darcy Schild previously reported, it was Del Rey's own fans who previously criticized her choice in face mask, with people writing messages like "Love you love you love you so much but please wear a mask under that one, take care" on Instagram.

"Other fans seemed to defend Del Rey's mask, pointing out that the star may have been wearing a clear layer of fabric under the accessory," Schild wrote.

Mesh masks are sold through a variety of retailers and websites, though they're especially popular on marketplace sites like Etsy.

Though many of the designs are meant to be worn on top of another mask — for both protective and styling purposes — some of the face coverings are being purchased by those who are entirely against wearing masks.

"I think these mask requirements are ridiculous, so this is the perfect alternative if you want to be able to breathe!" one Etsy shopper commented on a mesh mask sold by NevaNudeLLC in July. "My daughter was even excited to wear it because of how sparkly and colorful it is."

Cloth masks and other protective equipment is crucial in helping prevent the spread of COVID-19. As Insider's Anna Medaris Miller wrote, "medical masks or cloth face coverings, ideally with three layers, could be a ticket to controlling the coronavirus outbreak — if everyone wore them."

Medaris Miller pointed to a recent UK study, which showed that "mandates to wear masks could be enough to contain an outbreak without a lockdown," as well as a case report in which two infected hairstylists wearing masks in Missouri did not transmit the virus while seeing 140 customers (also wearing masks).

While wearing masks helps protect others, Medaris Miller wrote that "a range of new research shows masks protect the wearer, too," citing Dean Blumberg, chief of pediatric infectious diseases at UC Davis Children's Hospital, who said wearing a mask can reduce the risk of infection by 65%.

28 Of The Most Powerful Photos Of This Week