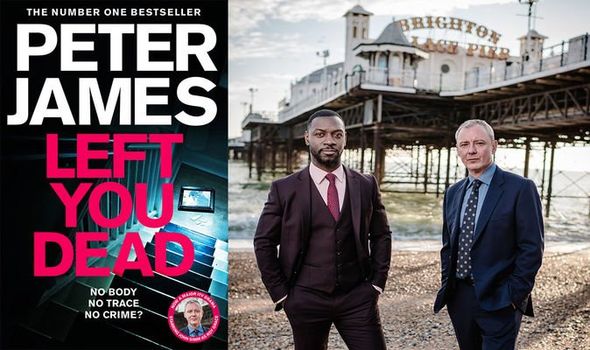 Not the usual procedure but I’ve enjoyed most of the author’s books so thought having not especially relished the last couple I’d give the new one a whirl. And, boy, was I glad I did. Peter James has moved from Brighton to Jersey. The move and the Channel Island air has obviously given him back his creative mojo because this is the best Roy Grace book for several years.

The last two were pretty dire and Find Them Dead was, as a Roy Grace book, a stinker.

It could have worked as one of James’s stand-alone thrillers such was the lack of involvement of Roy Grace.

Now Roy is back and Left You Dead is a real page-turner.

Niall and Eden Paternoster are a thirty-something couple who spend their spare time wandering around the stately homes of England.

One Sunday, on the way home after a trip Eden tells her husband to stop off at Tesco to collect some cat litter. He wants to get back to watch the Belgian Grand Prix and go for a bike run before work and there is a bit of an argument.

Niall’s mood is not helped when his wife doesn’t return and he is left sitting in their car.

He waits until his patience runs out and goes home expecting to find Eden there.

No one is home.

He reports his missing wife to the police and is surprised to find himself arrested for her murder a few days later after being interviewed by Detective Superintendent Roy Grace and his sidekick Detective Inspector Glenn Branson.

Niall appears to be the prime suspect – his business has gone bust and he makes a few quid by driving his mate’s taxi, leaving Eden as the family breadwinner.

He still has big dreams which tend to rub people up the wrong way and most folk at least in the police don’t like him.

But does that make him a wife murderer?

As I say, Left You Dead is the best Grace book for a few years and at nearly 500 pages is a bumper read.

There are still a few quibbles.

James thanks his “amazing editor” but surely an editor amazing or otherwise would know you can’t microwave tin foil, understand the meaning of enormity, not demote Detective Inspector Glenn Branson to a Detective Sergeant towards the end of the book (sloppy) and not misspell my name – twice (deliberate or sloppy?)

Those “mistakes” aside, go and buy the book.

The Truth About Harry And Williams Fight At Prince Philips Funeral

This Is How You Should Be Washing Your Sheets, According To The Laundry Guy

Twin sisters give birth to baby girls on their 33rd birthday