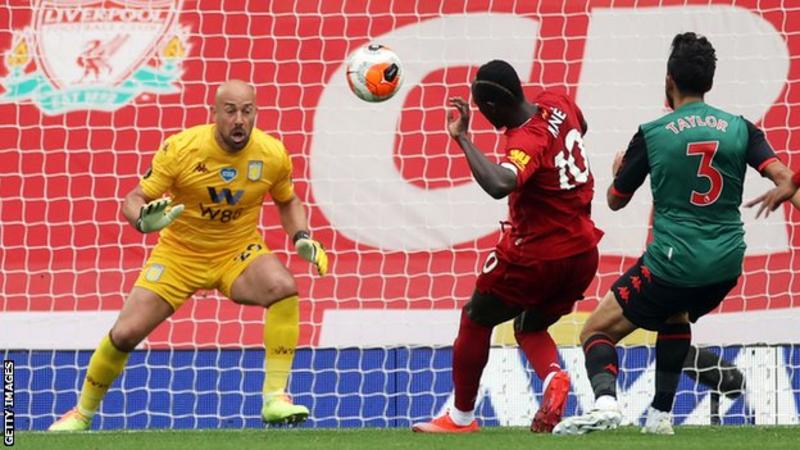 Liverpool marked their first home game since becoming Premier League champions with victory, scoring twice in the second half to see off a stubborn Aston Villa.

The Reds, who were beaten by Manchester City 4-0 on Thursday, were far from their best with the opening goal coming from just their second shot on target, Sadio Mane lashing Naby Keita’s cross in via the underside of the crossbar.

Until then Villa had looked like earning a precious and unexpected point and had even had chances to go ahead themselves, with Alisson parrying away Anwar El Ghazi’s fierce shot early in the second half.

The victory means Liverpool have now won all 17 Premier League games at Anfield this season and extends their winning run at home to 24 league games, stretching back to a 1-1 draw with Leicester in January 2019.

Defeat for Villa means they remain in the relegation zone in 18th, one point adrift of safety and still searching for their first win since the Premier League was restarted.

Liverpool now have 89 points from 33 games and can still break Manchester City’s top-flight record of 100 points in a season with five matches remaining and 15 points available.

Reds not at their best, but get the job done

This was a welcome return to winning ways for Liverpool in their first Anfield game since a first league title win in 30 years was confirmed.

After the thrashing at Etihad Stadium, boss Jurgen Klopp said that his side had not lost any focus after achieving their main objective, but they were distinctly below par in a scrappy opening half against Villa.

After being given a guard of honour by the visitors before kick-off, Liverpool struggled to get into any sort of rhythm and did not register a first shot on target until shortly before half-time when Mane’s snapshot was comfortably saved by former Reds keeper Pepe Reina. 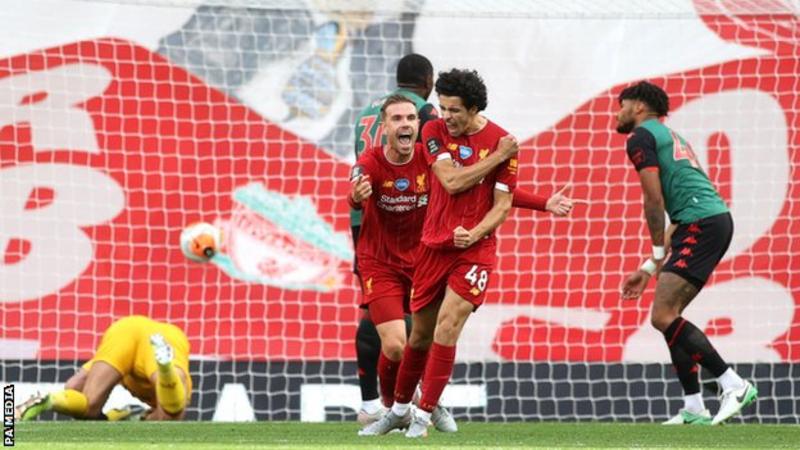 That was only their second attempt on goal – the first time in almost two years that the Reds had managed just two shots in the first half of a Premier League game.

Roberto Firmino, left on the bench as Klopp rotated his squad, came on just after the hour and only then did the hosts really start to look like their old selves.

In the end Liverpool, as champions do, got the job done.

It was not an encounter that will live long in the memory but it keeps Klopp’s side on course to add a couple more records to an already incredible season – the most points in a top-flight campaign and matching Sunderland’s 128-year-old record of winning every home game in a season.

It has been a tough return to Premier League action for Aston Villa as they look to avoid dropping straight back into the Championship.

Dean Smith’s side have now lost three of their five games since the restart, drawing the other two, but while they have arguably got what they deserved in some of the previous fixtures, they can count themselves unfortunate not to have secured what would have been a hard-fought point at Anfield.

For well over an hour Villa went toe-to-toe with the champions. They were strong and disciplined in defence and looked lively in attack, particularly on the counter.

But, as is so often the case in recent games, Villa were unable to make the most of the few opportunities that came their way and once Liverpool went ahead, a 10th game without a win looked a formality.

Villa’s performance should give them heart but time is rapidly running out for them to pick up the points they need to survive.

They are only a win away from climbing out of the bottom three but with tough fixtures against in-form Manchester United and Arsenal to come, they need to find a way to make the most of the few chances that come their way. 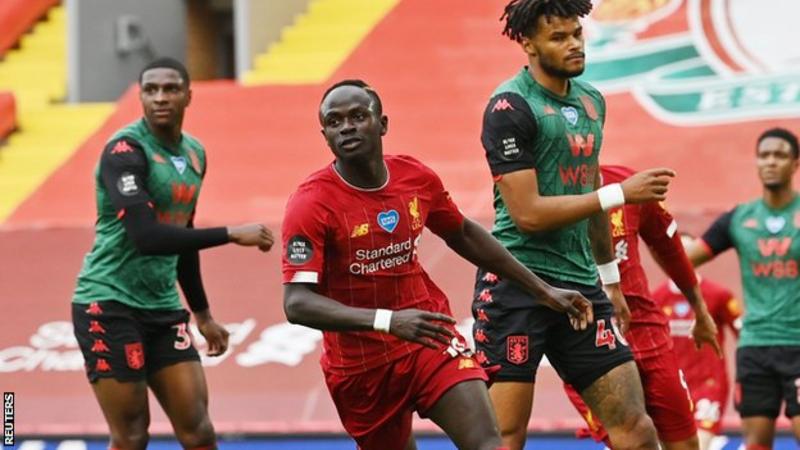 Mane the man again – the stats

Attempt saved. Jack Grealish (Aston Villa) right footed shot from the left side of the box is saved in the bottom right corner. Assisted by Neil Taylor.

Goal! Liverpool 2, Aston Villa 0. Curtis Jones (Liverpool) right footed shot from the centre of the box to the bottom left corner. Assisted by Mohamed Salah with a headed pass.

Attempt missed. Curtis Jones (Liverpool) left footed shot from outside the box is high and wide to the left. Assisted by Georginio Wijnaldum.

Indiana Vassilev (Aston Villa) wins a free kick in the defensive half.

Joseph Gomez (Liverpool) wins a free kick in the attacking half.

Attempt blocked. Jota (Aston Villa) left footed shot from the right side of the box is blocked. Assisted by Mbwana Samatta.

Mbwana Samatta (Aston Villa) wins a free kick in the attacking half.

Tyrone Mings (Aston Villa) wins a free kick in the defensive half.

Attempt saved. Roberto Firmino (Liverpool) right footed shot from outside the box is saved in the bottom right corner. Assisted by Mohamed Salah.

Goal! Liverpool 1, Aston Villa 0. Sadio Mané (Liverpool) left footed shot from the centre of the box to the high centre of the goal. Assisted by Naby Keita.

Pepe Reina (Aston Villa) wins a free kick in the defensive half.

Andrew Robertson (Liverpool) wins a free kick in the defensive half.

Ezri Konsa Ngoyo (Aston Villa) wins a free kick in the defensive half.