It's been seven years since Sydney ferry 'Radar' plied the waters of Sydney Harbour and for all that time she has sat in dry dock at her birthplace in McMahon's Point.

Amid cloudy skies, christened not with a bottle of champagne but a traditional smoking ceremony on deck, the heritage ferry re-entered familiar waters on Wednesday, having undergone a stunning transformation for the upcoming Biennale of Sydney. 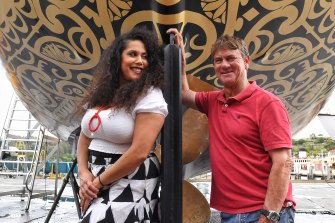 Almost 20,000 man-hours have gone into the $2 million refit by Noakes Boat and Shipyard, replacing the engine, resheathing the hull with fibreglass, and replacing the upper deck with timber from the World War II destroyer HMAS Adelaide.

The ferry's traditional red and yellow trim has given way to a striking new lick of paint featuring traditional tattoo markings celebrating and honouring women of the Pacific Islands.

Throughout the 87 days of this year's Biennale beginning March 14, the traditionally crafted boat will offer safe passage to Cockatoo Island, one of six venues that will present works by local and international contemporary artists for its 22nd exhibition.

Sean Langman, yachtsman and Noakes Group managing director, regards the ferry as a living symbol of reconciliation between cultures and a celebration of the dying arts of tribal tattooing and boat building: "Very much built in a man's world and symboled in a women's world," he says. "The art was banned during colonialism and each symbol tells a story.

"The same thing that happened when the First Fleet came here and people were displaced on Sydney Harbour – boatyards and shipwrights are being displaced. We are surrounded by new residents that just don't know the ways of a working port." 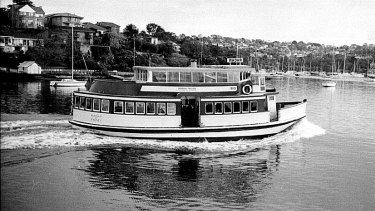 Radar has had a name change to 'Nirin Haiveta' – in honour of the Sydney Biennale theme "Nirin" that draws on the Wiradjuri word meaning edge and "Haiveta" that means heartfelt comforter in the Toaripi language of Papua New Guinea.

Haiveta is also the name of the mother of Grace Dlabik, founder of the BE Collective; a group of young artists who adapted the markings worn by their ancestors for the ferry's repaint.

As a girl, Dlabik's mother had been discouraged by missionaries from participating in the sacred ancestral practice of tattooing, a tradition of visual storytelling that she and many women of her generation have reclaimed.

Dlabik also approached Aunty Sana Balai as assistant curator of Indigenous Art at the National Gallery of Victoria to ask permission to adapt Balai's mother's chieftain markings. A diamond shape mark symbolising the feminine has been painted above the vessel's doorway.

It seemed fitting, Dlabik says, given the long maritime practice to name vessels after women and ascribe them a feminine presence.

"It's a floating art piece definitely" she says. "I think its really important that we rise to the occasion to be able to understand that we can coexist in white spaces as we are. We can actually be proud of our cultural identities and wear them upon our skin."

Langman believes there will be much sentimental interest in the revival of the 74-year-old vessel and he hopes after the Biennale it might find new purpose making tourist runs to harbour landmarks.

"I would say it is arguably Sydney's most-loved ferry," he says. "She did the school runs up the Lane Cove River from 1950 to 1987. Sydney and Sydney Harbour isn't very much a city that takes on its history unlike other cities around the world. We take our harbour, our heritage for granted and lots of things come and go."

Nirin Haiveta will transport students free of charge from Circular Quay to Cockatoo Island every weekday of the Biennale and will hop between Sydney Olympic Park Wharf and Cockatoo Island on Saturdays. For ferry bookings contact [email protected]