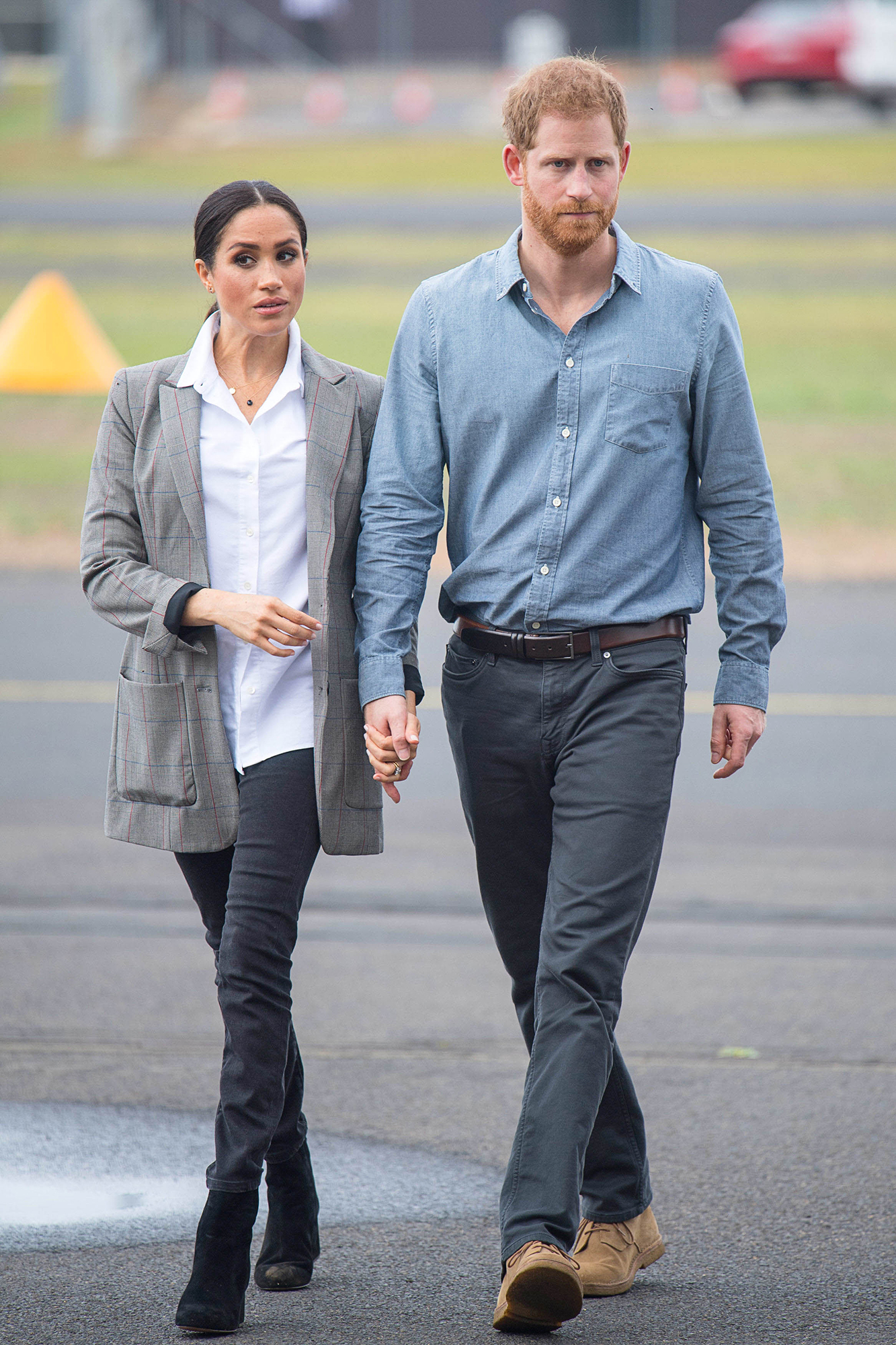 Protecting her husband. Amid Meghan Markle’s ongoing lawsuit against Associated Newspapers Limited, the former actress’ texts reveal how concerned she was about husband Prince Harry’s wellbeing following her drama with father Thomas Markle.

Several of the 40-year-old Suits alum’s texts and emails to her former communications chief were released by London’s Court of Appeal on Friday, November 12, as the Duchess of Sussex detailed her plans to write a note to her 77-year-old father after it made headlines that he would skip her May 2018 royal wedding to the 37-year-old Duke of Sussex.

“The catalyst for my doing this is seeing how much pain this is causing H,” Meghan allegedly wrote via text in August 2018, according to NBC News. “Even after a week with his dad [Prince Charles] and endlessly explaining the situation, his family seem to forget the context — and revert to ‘can’t she just go and see him and make this stop?’”

The Northwestern University alum continued, “They fundamentally don’t understand so at least by writing H will be able to say to his family … ‘She wrote him a letter and he is still doing it.’ By taking this form of action I protect my husband from this constant berating, and while unlikely perhaps it will give my father a moment to pause.’”

Where Do Harry and Meghan Stand With the Rest of the Royal Family?

In the texts, the Bench author further discussed her reasoning for writing the letter to the former lighting director, noting, “Obviously everything I have drafted is with the understanding that it could be leaked so I have been meticulous in my word choice.”

Shortly before the pair’s nuptials, the former Hallmark actress wrote a five-page, handwritten note to Thomas, which was publicly shared in February 2019, as she discussed her emotions regarding their estrangement.

“Daddy, It is with a heavy heart that I write this, not understanding why you have chosen to take this path, turning a blind eye to the pain you’re causing,” Meghan wrote in her letter, which was dated August 2018, months before the royal couple’s lavish wedding. “Your actions have broken my heart into a million pieces — not simply because you have manufactured such unnecessary and unwarranted pain, but by making the choice to not tell the truth as you are puppeteered in this. Something I will never understand.”

Thomas, who leaked the private letter to the Daily Mail, noted he hadn’t previously intended to “out of respect” for his daughter, but felt he was forced to because of false claims about himself.

“I thought it would be an olive branch. Instead, it was a dagger to the heart,” Thomas told the U.K. newspaper at the time.

Following the release of her emotional letter, the mother of two — she shares Archie, 2, and Lilibet, 5 months, with Harry — was heartbroken to learn of its unexpected publication.

Everything Meghan Markle’s Dad, Half-Sister Have Said About Her

“Meghan really hoped Thomas wouldn’t leak the letter,” a source exclusively told Us Weekly that February. “She finds it absolutely heartbreaking that her own flesh and blood continues to profit from her.”

Since then, Meghan and Thomas have not had the smoothest of relationships, which she addressed during her and the military veteran’s bombshell tell-all interview earlier this year.

“I grieve a lot,” she said during the CBS special in March. “I mean, I’ve lost my father. I lost a baby. I nearly lost my name. I mean, there’s the loss of identity. But I’m still standing, and my hope for people in the takeaway from this is to know that there’s another side.”

She added at the time, “That, for me, has really resonated, especially now as a mother. And also me saying just full stop, ‘If we use this to protect you, we won’t be able to protect our own children one day, well, I’m talking about your grandchildren. … I look at Archie, I think about this child and I genuinely can’t imagine doing anything to intentionally cause pain to my child. I can’t imagine it. So it’s hard for me to reconcile that.”

Gardeners’ World: Monty Don explains how to repot and look after spider plants

Alarming photos show how Iceland glacier has shrunk in 30 years