Is there such a thing as a healthful beverage?

In truth, there's not much of a health case to drink any beverage other than water after the age of two — despite the marketing and advertising you might have seen on the benefits of things like dairy milk, plant-based milks, juices and more. 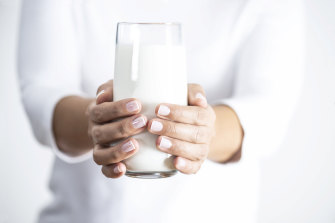 All other mammals consume only two liquids over the course of their lives. Dairy milk isn’t one of them.Credit:iStock

All other mammals consume only two liquids over the course of their lives: breast milk and water. The evidence for telling humans that some beverages are necessary and that others should be avoided isn't nearly as clear as many believe.

Last year, a group of leading US health organisations released recommendations on what children should drink. They convened a panel and a scientific advisory committee. They pored over documents, studies and reports from all over the world.

The undertaking was about as thorough as it could be. Yet the recommendations they released are still somewhat disputed.

For children above the age of one, dairy milk is "recommended," although the fat content and amount changes with age. Juice should be limited, the panel says. Pretty much everything else except water should be "avoided." This includes all plant-based milks, unless necessary because of allergies. This also includes "toddler milk," which has increased rapidly in popularity (it contains mostly powdered milk, corn syrup and vegetable oil).

Before going any further, let's acknowledge where there is consensus. Human infants, like all mammals, depend on milk for sustenance at the beginning of life. Breastfeeding (human milk) is almost always recommended, as well as baby formula until one year of age if breastfeeding is not feasible. Most experts also think that children should continue to be breastfed or transition to whole cow's milk until they're two. The fat is believed to aid in brain development.

It's at that point that things get tricky.

There's very little high-quality evidence, and no comparable mammalian example, to argue for the specialness of cow's milk after this period. Arguments that it's good for you because it has protein and other vitamins and minerals could be made about many, many other foods (but those foods don't receive such official recommendations of support). 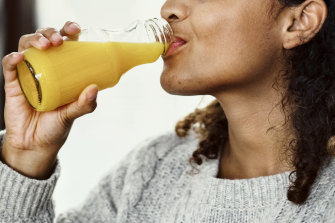 It may taste good, but juice is full of sugar.Credit:iStock

The recommendation that we limit juice, and not just avoid it, is also somewhat questionable. The argument for juice is that while we'd prefer that children eat fruits and vegetables, some just won't. In that case, the experts argue that 100 per cent fruit juice "may be an important way to meet these recommendations".

But juice is not healthful. It's full of sugar. A 350-millilitre glass of apple juice has the same amount as a can of soft drink (grape juice has even more). It's also a processed food. It contains no fibre and does nothing to sate you. It's empty calories. Studies show that adults who eat an apple before a meal consume fewer calories during that meal; drinking a glass of juice instead has much less of an effect on calorie consumption.

Oddly, the recommendations take a much stronger stance against plant-based milks, like almond milk or soy milk. Those should be "avoided" for children, not limited. Why? Because, as the authors of the recommendation note, in studies of their nutritional content they come up short compared with dairy milk.

It's true that, with the exception of soy milk, plant-based milks have significantly less protein than cow's milk. It's also true that while some plant-based milks are fortified with calcium or vitamin D, it's not clear that these are absorbed as well from other milks as they are from cow's milk. But does that matter?

The authors cite two studies that show the "negative" effect of plant milk in children. The first was a cross-sectional study of children in Canada, and it found that children who exclusively drank non-cow's milk were more likely to have low vitamin D levels than those who only drank cow's milk (11% versus 4.7%).

But only 5 per cent of children drank exclusively non-cow's milk, and it's very possible that there are confounding factors in their diet that might lead to this result. It's also unclear if this low vitamin D level had any health implications.

The second study reviewed the literature and found 30 cases of clinical conditions associated with exclusive consumption of plant-based milks. First, this is essentially a collection of anecdotes. Second, almost all cases occurred in the first year of life, when children shouldn't be consuming any milk except human breast milk. Even cow's milk isn't recommended there.

The bottom line is that every beverage other than water and breast milk might be treated the way alcohol is for adults — you can have it if you want it, but don't be under the illusion that you need it.

Ryan worries that his girlfriend has developed an eating disorder

This Mini $30 Snow Cone (Or Frozen Cocktail!) Maker on Amazon Will Bring Carnival Fun to Your Kitchen

Nature-based or lab leak? Unraveling the debate over the origins of COVID-19