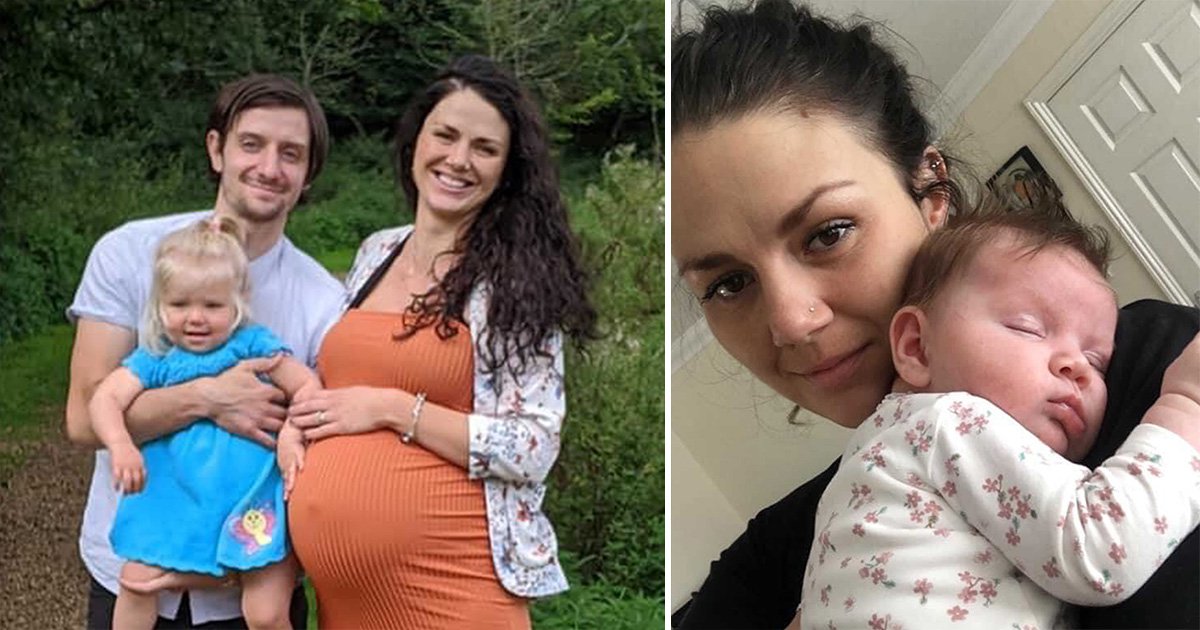 A young mum diagnosed with breast cancer for a second time despite having had a double mastectomy is now sharing her story.

Kate Pistilli, 34, underwent a double mastectomy after she was first diagnosed with breast cancer at the age of 28.

The mum-of-two, from Cambridge, was devastated when she found a second lump. She was eventually diagnosed with breast cancer again during her pregnancy with her second daughter, despite the removal of both of her breasts.

Kate is a social worker an says that it was very unlikely that the cancer would return after a double mastectomy. When she was diagnosed again, she felt she had been robbed of her pregnancy.

‘It was terrifying. I had my eldest daughter, who was one year old at the time, and I was pregnant with my next child.

‘I’d already had both of my breasts removed after I was first diagnosed with breast cancer in 2015.

‘I was 28 years old and having a cuddle with my boyfriend, Giuseppe, who is now my husband when he discovered a lump in my breast.

‘I had a history of breast cancer in my family, so I went to get it checked out. I didn’t think too much of it because I was only 28 and never imagined I would have cancer. But it was.

‘I was completely devastated.’

Following on from that diagnosis, Kate underwent one month’s worth of IVF treatment to freeze her eggs. She did so as she worried the cancer treatments would affect her fertility.

She endured an 11-hour operation, where surgeons completed her double mastectomy and breast reconstruction.

‘Following the surgery, I then began my six-month course of chemotherapy,’ Kate recalled.

‘It wasn’t a pleasant time. All of my hair fell out and I was constantly in and out of the hospital. I felt like my body was broken and that my femininity was taken from me. I had no hair, no eyelashes and had to have my boobs removed.

‘I was also having various other treatments to target the specific type of cancer I had, such as Tamoxifen, which is an oestrogen blocked and regularly used in breast cancer patients.

‘However, this meant that I was in menopause, at the age of 28, while having chemotherapy.

‘The treatments were successful and in 2018 I went on to marry my husband.’

She continued: ‘I knew I wanted to try for a baby so I stopped taking the Tamoxifen in time for my honeymoon.

‘As soon as we tried for a baby, I fell pregnant. It was a miracle! I thought that after everything my body had been through, I would struggle to fall pregnant.

‘I gave birth to our eldest daughter in 2019 and to our amazement, nine months later, I fell pregnant again.’

It was a terrifying time for the young mum. She had a daughter and was expecting another.

She explained: ‘I had to have a lumpectomy to check out the lump and it came back as being cancer when I was six months pregnant.

‘It was the worst thing that could have happened to me. I then had to have another operation to remove the margins of the cancer while I was pregnant.

‘Once the cancer was removed, I had to carry on with my pregnancy and wait until I’d given birth to have radiotherapy.

‘After finding the second lump it was awful. I couldn’t work because I was struggling to keep my head together and I was trying to look after my daughter while also growing another child.

‘I felt robbed of my pregnancy, especially as it was during the pandemic. I couldn’t even see any of my friends or family, and I had to break the news to them that I had cancer again over Facetime.’

It was a confusing time as her emotions were conflicting.

‘I was feeling two extremes of emotion at the same time,’ she said.

‘It was a feeling of happiness because I was pregnant, and horror because I had breast cancer again despite having both of my boobs removed.

‘After having my daughter, I started my radiotherapy a week later for a month.

‘I was going into hospital every day for treatment, instead of being cuddled up with my newborn. It was just so wrong and so unfair.

‘The day after I gave birth I had to have a full-body scan to make sure the cancer hadn’t spread. It was horrendous.’

Thankfully, Kate eventually received the good news she had been waiting for.

‘I believe that if I hadn’t had cancer before, I wouldn’t have noticed the second lump because I was pregnant and boobs change all the time throughout pregnancy.

‘The fact that I had implants made it easier for me to discover it.

‘It’s been a tough journey.’

TikTok Sues Trump Administration, Arguing Ban Is Not Based on a ‘Bona Fide National Emergency’

Shark Tank: How Much Are The Judges Worth?