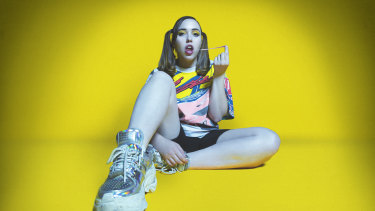 Remember back in the ’90s when there was a wall between alternative and pop? Sophie Allison doesn’t. The 22-year-old Nashvillian, who trades as Soccer Mommy, has declared her love for Taylor Swift and Avril Lavigne, and while she has an obvious pop sensibility, her lyrical approach and singing style are more aligned with Liz Phair. Her 2018 debut Clean was a spare and striking album that skilfully dissected love gone wrong; Color Theory finds her digging deeper, both lyrically and sonically. Night Swimming shares a title with an REM song, but whereas Michael Stipe sang about finding connection and liberation in the activity, Allison feels a cold separation from someone as she dives in and he remains behind. Likewise, the epic Yellow Is the Color of Her Eyes has the slow-burn grandeur of Coldplay’s Yellow, but while Chris Martin saw stars and passion, Allison is contemplating mortality in the shape of her mother’s cancer. And In Royal Screw Up, a song that casts her as an heir to Phair’s throne, she soberly dissects a break-up and states: “There’s not an answer – I am the problem for me.” It’s this kind of self-awareness that makes her so powerful. BARRY DIVOLA

The wonder is that Seattle's Penthouse jazz club didn't spontaneously combust when this was recorded in 1962. Here's hard bop at its most incendiary, and these 10 tracks (vividly taped by a radio station) have never before been released. Anyone lucky enough to hear Griffin at the Petersham Inn in 1980 will remember his phenomenal ability to keep upping the stakes, and he and fellow tenor saxophone giant Eddie "Lockjaw" Davis were regular collaborators until Griffin moved to Europe in 1963. Theirs weren't tenor "battles": they were dynamic exercises in contrast. Davis socked you with his big, gruff sound, rhythmic eccentricity and R&B inflections. Griffin, meanwhile, despite being lighter, fleeter and more harmonically hip, also boasted a sound big enough to pulverise atoms that strayed too near his saxophone's bell. With them are pianist Horace Parlan, bassist Buddy Catlett and drummer Art Taylor, who collectively swing harder than a disillusioned electorate. The liner notes are fascinating, and the furious tempos are balanced by such items as the exotic Bahia and Griffin's tenor doing some sweet talking on Sophisticated Lady. JOHN SHAND

Six years on from the hugely successful Our Love, Caribou (real name Dan Snaith) returns in fine form, exploring what it means to exist and love through periods of great change. On Suddenly, the Canadian showcases his flair for the beautifully weird, encapsulated best on You and I, which builds from a dreamlike gentleness to a swelling freak-out. The buoyant, thumping Never Come Back is similarly made for the dancefloor, while the beguiling Home breathes new life into this 1971 song by little-known soul singer Gloria Barnes – an addictively groovy reimagining, arranged with long-time collaborator Kieran Hebden (better known as Four Tet). Even at his more simplistic, Snaith is playful and inventive: the lower-key Magpie has a pared-back beauty of its own, and the '90s-inflected Ravi radiates unadulterated joy as it flutters from voice to voice. It has been a pleasure to watch Snaith evolve over the past two decades in all of his forms, from Manitoba to Caribou. He remains one of the best in the game, and his seventh record puts his diverse range on display, inviting both quiet contemplation and life-affirming celebration. GISELLE AU-NHIEN NGUYEN

Ever since the corporate world discovered The Four Seasons is calming telephone-hold music, Vivaldi’s masterpiece has joined Pachelbel’s Canon and Beethoven’s Fur Elise – similar victims – as over-played pieces I don’t need to hear again. This is a minor tragedy, as it's a work of genius: jaunty, delightful, eminently hummable, and ideal for those new to classical music. There are already dozens of deeply satisfying recordings, but Luca Sulic has done something daring and interesting in arranging the four short violin concertos – Spring, Summer, Autumn and Winter – for cello and orchestra. It’s not just a matter of transposing down, but of reimagining to suit the cello’s sound world. It is extraordinarily virtuosic, with some almost supernatural velocity (try the last movement of Summer), and breathes new interest and life into this baroque favourite (even if many will not be convinced), with superb playing from Rome's Academy of Santa Cecilia. This is the first solo venture for Sulic, half of the popular crossover duo 2CELLOS, and reportedly the arrangement is his own – one learns nothing from the woeful liner notes, and the album contains under an hour of music. BARNEY ZWARTZ

Why Meghan Trainor Says She Only Writes Happy Music