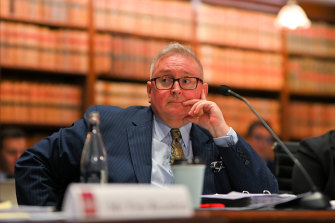 Don Harwin, pictured at an earlier hearing, detailed the rise in applications.Credit:Steven Saphore

“It’s important to note that Aboriginal Heritage Impact Permit applications are rarely refused outright, the majority of Aboriginal impact permits are, in fact, approved with conditions,” he said.

At a previous estimates appearance earlier this year, Mr Harwin told MPs that it took five years to approve more than 400 of them, and was unable to say if any had been knocked back.

“Minister, that’s a massive increase over the average since 2016, I mean over 200 in a year is pretty significant,” said Ms Sharpe. 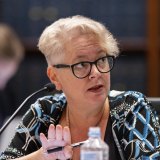 But Mr Harwin argued that most permits were negotiated between proponents and the Aboriginal community it would affect, to try and mitigate impacts on heritage sites.

He also confirmed that since July 50 additional AHIP applications had been made with 46 of them having already been approved.

In that same period, 142 referrals were made to Heritage NSW by the Department of Planning, Infrastructure and Environment (DPIE) for projects and developments of state significance, which are exempt from requiring an AHIP. However, Mr Harwin was unable to confirm how many of those referrals had been approved.

Labor has now used the figures to accuse the government of destroying heritage sites around the state.

“Through this planning pathway there are three times more applications to destroy Aboriginal cultural heritage that you don’t necessarily get a say in, are you concerned about that?” asked Ms Sharpe.

Mr Harwin replied that "there is ongoing consultation with the Heritage Council and Heritage NSW which provide comments to DPIE at multiple stages of the major project approval pathway."

Meanwhile, long-awaited reforms to Aboriginal heritage laws have been delayed yet again after Mr Harwin confirmed he would not be able to release a draft bill until at least next year.

“Obviously before I’m able to release the bill it is required to go through Cabinet processes … it’s my hope that I will have a bill which can be put out for consultation not too long after Christmas,” he said.