Buttigieg is in a tough spot ahead of South Carolina’s primary this weekend, a race he can’t afford to skip for Super Tuesday states. 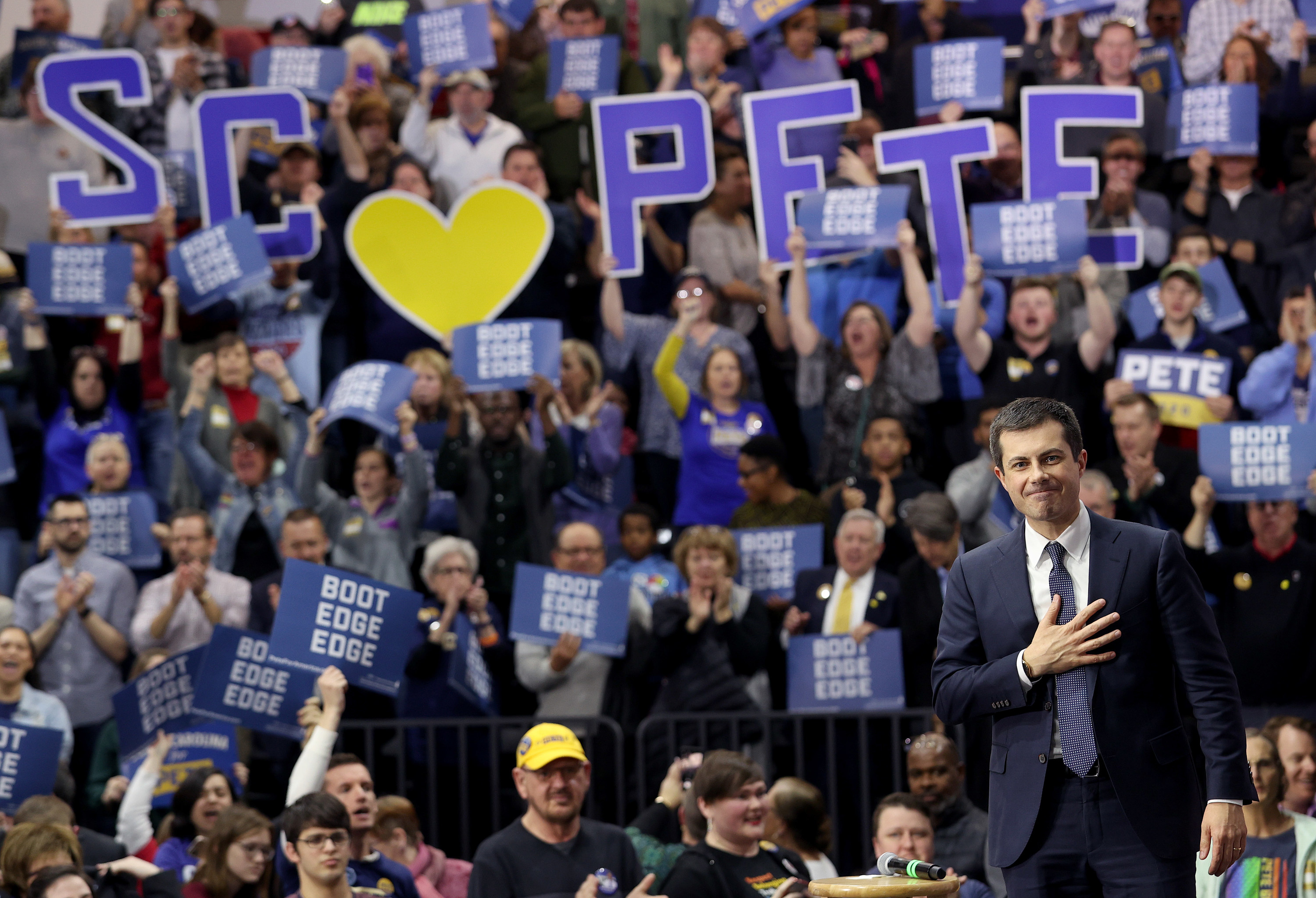 GREENVILLE, South Carolina — For Pete Buttigieg this week, the cost is so high to meet expectations so low.

His aides are bracing for a fifth-place finish Saturday in South Carolina’s Democratic primary, the first contest this year in which black voters are expected to account for most of the turnout. His viability as a presidential candidate depends on his ability to build a more diverse coalition and on his ability to be competitive in most states.

But nothing has gone quite exactly as he planned, and now those two needs don’t quite align, leaving him in a thoroughly can’t-win jam.

Buttigieg couldn’t simply blow off the voters in South Carolina, not when his struggle to connect with people of color lingers as a concern. More time and money — the latter running low to the point of urgent fundraising goals and performative strategy memos — might have been better spent in the upcoming Super Tuesday states. So he’s stuck here trying to make the most of it, with the promise of little more than a participation trophy and hopes that the final numbers Saturday aren’t so bad for him (and so good for former vice president Joe Biden) that they obliterate Buttigieg’s case that he’s the strongest moderate in the race.

“If I could give the harshest criticism of Pete’s campaign so far, it would be the fact that we’re almost out of time in South Carolina,” J.A. Moore, the South Carolina state representative who is Buttigieg’s most prominent endorser here, told BuzzFeed News. “I think if Pete was given a little more time here, this would be a completely different race in South Carolina.”

Buttigieg, the former mayor of South Bend, Indiana, was unknown nationally a year ago. And though he’s made positive impressions in his events here since Monday, South Carolina was never a cornerstone of the launch plan. Advisers believed strong performances in Iowa and New Hampshire, the overwhelmingly white states that voted first and second, would translate into more favorable consideration from black and Latino voters in the following contests.

Instead Buttigieg, 38, is left with a bunch of what ifs. What if he had won a more decisive delegate lead in Iowa? And what if that result was obvious on caucus night, not delayed for several days due to technical difficulties, and not announced alongside a substantial popular vote lead for Bernie Sanders? What if his close second place finish behind Sanders in New Hampshire hadn’t taken a narrative backseat to Amy Klobuchar’s surprise third place showing? What if Buttigieg’s team hadn’t prematurely raised expectations of another second place in Nevada — Buttigieg’s first test with voters of color — only to finish a distant third?

Even those impressed with Buttigieg in South Carolina were skeptical of his chances going forward. There was a sense that any value from his visits may not be realized until later in his political career.

“I think he’s a fine young man, I really do,” the Rev. O.L. Davis said after hearing Buttigieg speak Wednesday at a ministers breakfast hosted by the Rev. Al Sharpton’s National Action Network in North Charleston. “I look for him to be president one day. I don’t know if it’ll be this time.”

Buttigieg ditched his usual pitch for generational change this week in favor of a speech meant to show compassion and empathy and acknowledge his white privilege. He expressed an eagerness to learn from those with different life experiences. He described his request for black support as humbling.

“I do not have the experience of having to sit down with a teenage son and have the talk about what to do if you get pulled over, or the experience of my hands tightening on the wheel when I see red and blue lights, fearing for my life, rather than just wondering how much the ticket is going to be,” he said Monday during another campaign event in North Charleston. “I do not have the everyday experience of walking down the street or to a shopping mall and feeling eyes on me, judging me to be dangerous for no other reason other than the color of my skin.”

Buttigieg’s campaign was criticized and embarrassed last year when several prominent black leaders said they were identified publicly — without their knowledge and against their wishes — as supporters of Buttigieg’s candidacy or his plan to address systemic racism. More recently ABC News reported he had overstated his relationships with black business owners. This week’s outreach has been more rewarding and less clumsy.

Several black surrogates from South Bend have been traveling the state to vouch for Buttigieg’s inclusiveness. (In a trolling move, Biden, the frontrunner in the primary, has been campaigning with the actor Vivica A. Fox, a South Bend native.) Walter Clyburn Reed — the grandson of the influential local Rep. Jim Clyburn, who has endorsed Biden — is working for Buttigieg’s campaign and was among the speakers at Monday’s event in North Charleston. Sharpton bragged at his Wednesday breakfast that he and Buttigieg chat regularly by phone — “never about who I’m going to endorse, but about what we see needs to happen in this country.” Jalen Elrod, a leader in the Greenville County Democratic Party, organized a Thursday photo opp and roundtable discussion on health care at a church in Greenville’s largely black Nicholtown neighborhood.

“This is a community that’s been neglected,” Elrod said. “His being here means a great deal because this is one of the most heavily African American precincts in the city, and he is the only presidential candidate to have set forth in this church.”

There were some awkward moments, too. Buttigieg, often a loud and confident speaker, has been dealing with a cold and weakened voice. The roundtable, open only to about a half-dozen health care activists and the media, came to a hard stop after a half-hour. And the Monday event in North Charleston drew mostly white voters; nearly every black attendee was placed behind Buttigieg, in the camera shot.

“We’re trying to figure that out ourselves,” Charmanique Bailey, a Buttigieg supporter from Charleston, replied when asked who determined the seating arrangements. “We noticed that.”

There have also been some allusions to tensions that emerged in the state last year over Buttigieg’s sexuality.

Gladys Muhammad, one of the South Bend surrogates, interrupted Buttigieg’s closing Monday with an impromptu testimonial: “I’m an old, black, straight woman, and I support Pete Buttigieg,” she said before praising the former mayor’s work in Indiana and asking the crowd to back him.

Muhammad’s emphasis on her sexuality was perhaps an unintentional call back to a report that focus group research conducted by Buttigieg’s campaign determined the fact that he is gay could be an obstacle with black voters in the state. One elderly man who spoke to BuzzFeed News after hearing Buttigieg at the Sharpton event said unprompted that the candidate’s sexuality was a disqualifying issue to him. He cited the elder Clyburn’s comments last fall about how older generations of black voters remain uncomfortable with LGBTQ people.

“Older African Americans don’t judge people by what they do in their bedrooms, but it’s just something that they cannot conceive of in the top person in America,” said Wilmer Nelson Jr., who is leaning toward Biden or Tom Steyer in the primary. “I think that’s why I like what [Buttigieg] says, but I just can’t — the personal side is where it would hold me from voting for him.”

By Wednesday, Buttigieg had put precious campaign money behind a TV and digital ad featuring Muhammad’s comments in North Charleston — minus the “straight” line.

“I think,” Buttigieg is heard telling the crowd in the spot’s closing seconds, “we ought to let Miss Gladys have the last word.”

‘You need both stories’: WHO adviser calls for national coronavirus recovery tally

Why Warner Bros. Is Key to Box Office Recovery Despite Streaming Films

This Guy's Past Was Filled With Drugs and Violence. Then He Found the Gym.