Carlton went into the game with the unaccustomed status as favourites, but they slipped up against Collingwood, not kicking a goal in the second half as Collingwood recorded an important win.

Our podcasters this week – Michael Gleeson, Caroline Wilson and Greg Baum – discuss the Blues at length, with more scrutiny on what changes to the playing list need to happen during the off-season.

"I thought it was an abject failure of Carlton to live up to the big moment," Gleeson says about Sunday's match at the Gabba. 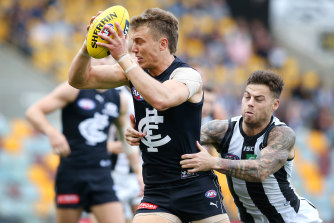 "They had everything to play for, and delivered nothing. It was a whimper in the second half – to be able to [not] kick a goal.

"Having led against a Collingwood team that was weakened … I thought it was poor."

Also this week, Joe Daniher's stunning return to footy prompts more questions about his and Essendon's future. The podcasters also have social media trolls in their sights, plus Brownlow thoughts, predictions on All-Australian defenders and much more.

How old is Lauren Goodger and what’s her net worth? – The Sun

Owners share snaps of their pets looking adoringly into their eyes