Victorian Jobs Minister Martin Pakula has offered the Andrews government’s first detailed explanation of how the hotel quarantine system was run, using his questioning at a parliamentary committee to distance himself from the apparent mistakes of cabinet colleague Jenny Mikakos’ health department.

Not once during his evidence did Mr Pakula cite the hotel quarantine inquiry to avoid questions, but instead spelled out that his department was responsible for “things like logistics”, while the Department of Health and Human Services was in charge of infection control. 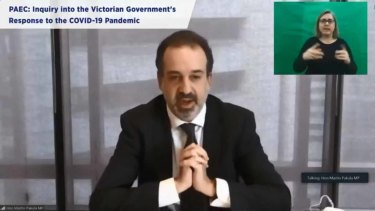 Any lapses in that area, including training security guards in how to avoid catching COVID-19, were the DHHS’ responsibility, he said.

Mr Pakula also said staff from his department had asked for police to be brought in to monitor hotels 24 hours a day, as had been done in New South Wales, but the request was rebuffed or ignored.

In the early days of the outbreak, DHHS insisted that infection control training was provided to all hotel staff, including security guards. But Elite Protection security guard Andrew Buntine, who was a supervisor at Rydges on Swanston in the weeks before the outbreak there, said DHHS officers had told guards to ration personal protective equipment to ensure there was enough for nurses and other essential staff when supplies were dwindling.

"The [department] officers really struggled to know what was going on and they were out of their depth,” he said in June.

Security guards and other hotel quarantine workers who spoke to The Age and The Sydney Morning Herald said DHHS did not provide them with infection control training before the coronavirus outbreaks at Rydges on Swanston and the Stamford Hotel.

Lapses at the Rydges and Stamford Plaza are considered responsible for most or all of Victoria’s second wave outbreak.

Ms Mikakos was not asked about infection control measures when she fronted the parliamentary inquiry on Tuesday but said the hotels program was a “multi-agency effort”.

Mr Pakula told the public accounts and estimates committee hearing that his team was in charge of “the booking of rooms, the organising of meals and laundry and things of that nature. They were responsible for logistics, the provision of meals.” 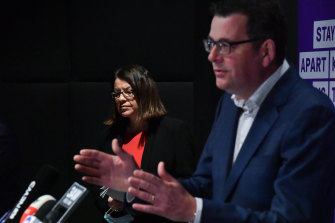 Mr Pakula defended public servants from Global Victoria, an international trade department, who appeared in a leaked video this week boasting of their success in establishing the program.

“If your point is that it would not be sensible for people from Global Victoria to be responsible for things like infection control, I would agree. And they were not,” Mr Pakula told the inquiry. “The responsibility for infection control and health matters was the DHHS, as you would expect.”

Mr Pakula insisted he was not pointing the finger at Ms Mikakos or the DHHS and refused to answer a question from Liberal MP Bridget Vallence asking which minister was ultimately responsible for the program.

“I’m not going to engage with you on what can only be described as a gotcha-type question,” Mr Pakula said.

Premier Daniel Andrews and Ms Mikakos have in recent weeks refused to answer questions on the quarantine hotels program before the inquiry being led by retired judge Jennifer Coate.

However, over two hours of questioning from the 10 MPs on the parliamentary public accounts and estimates committee, Mr Pakula and his most senior public servants painted the clearest picture yet of how Victoria’s quarantine hotels program was hatched.

They said that at 4.30pm on March 27, hours after National Cabinet agreed each state should establish a hotel quarantine system, Emergency Management Commissioner Andrew Crisp chaired a meeting at Victoria’s State Control Centre with representatives from various government agencies and police. Senior ministers, including Mr Andrews and Mr Pakula, did not attend.

The secretary of the Department of Jobs, Precincts and Regions, Simon Phemister, said his department was given 36 hours to hire private security companies. It has since been revealed that the contracting arrangements allowed companies to use subcontracting to pay guards as little as $18 an hour and hire them via WhatsApp messages.

Mr Pakula confirmed reports in The Age and Herald last month that, within days of setting up the arrangement, his department had become worried about the security guards.

“There were on a couple of occasions, early in the program, entreaties from officers of my department, where it was our view that police should be on-site at hotels,” Mr Pakula said.

Mr Phemister said those concerns were directed to Craig Eagle, a senior officer with Forest Fire Management Victoria who was put in day-to-day control of the hotels operation after the March 27 meeting.

“The deputy state controller [Mr Eagle] acknowledged and heard at all times any concerns that were raised,” Mr Phemister said. “What he did with our concerns, I’m unsure."

Victoria Police was not involved in quarantine hotels until July. In NSW, private security companies were overseen by police, and Border Force officials worked with security guards in each hotel.

Get our Coronavirus Update newsletter for the day’s crucial developments at a glance, the numbers you need to know and what our readers are saying. Sign up to The Sydney Morning Herald’s newsletter here and The Age’s here.

Here's What You Should Be Watching On Thanksgiving Day 2021

Spoilers: Gemma sets out on a bold new mission in Corrie

'Thor: Love and Thunder' Will Use the VFX Tech Pioneered by 'The Mandalorian'